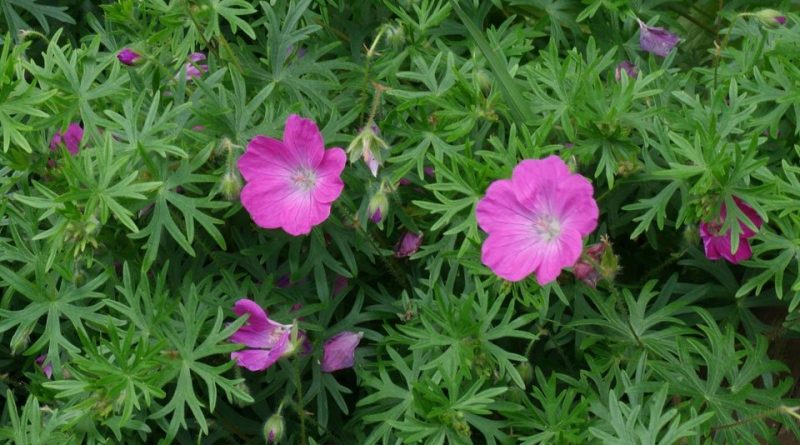 The Bloody crane’s-bill or bloody geranium (Geranium sanguineum L., 1753) is a perennial herbaceous species belonging to the Geraniaceae family.

Etymology –
The term Geranium comes from the Greek γεράνιον gheranion geranium in Dioscorides, derived from γέρανος ghéranos gru: due to the fruits similar to the beak of cranes.
The specific epithet sanguineum comes from sanguine, from sanguis sanguine: due to the blood-red color of the flowers.

Geographic Distribution and Habitat –
The Bloody crane’s-bill is a plant native to Europe and temperate Asia and is widespread in most of Europe up to the Caucasus.
In Italy this plant is widespread more or less throughout the territory (excluding Sardinia). On the European mountains it is equally widespread (apart from the Dinaric Alps).
Its typical habitat is coppice woods, but also forest edges in general, scrubs, xerophilous bushes and arid grassy places (including rocky slopes). The preferred substrate is calcareous-siliceous with neutral pH and soil with low nutritional values ​​and dry with an altitudinal diffusion up to 1200 m a.s.l. 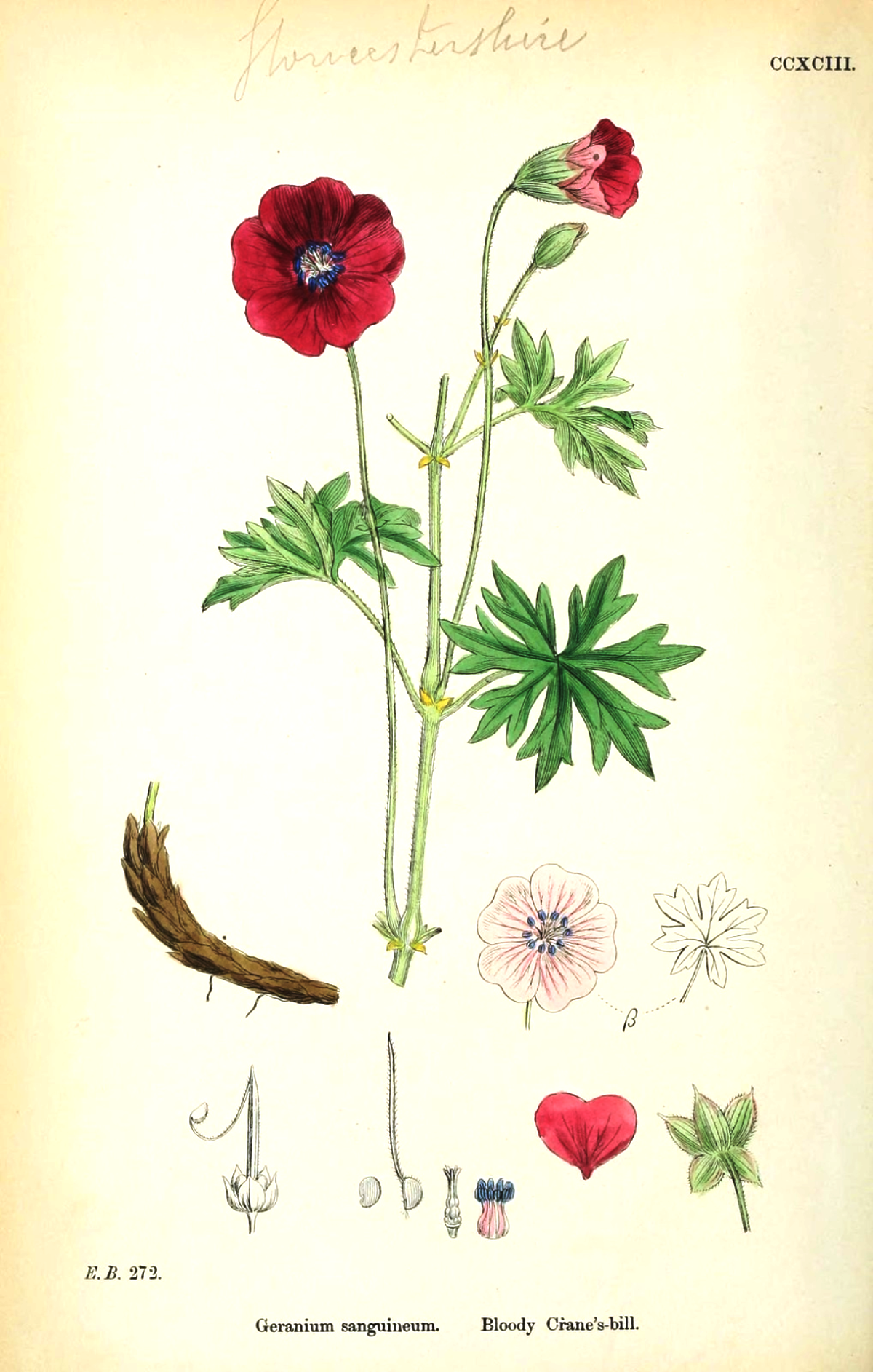 Description –
Geranium sanguineum is a perennial herbaceous plant with a large rhizome.
The stem is richly leafy and ascending, very branched from the base and hairy due to simple and patent hairs 2-3 mm long. At the branch points it is enlarged; the nodes are decorated with three triangular bracts 3-4 mm long. The plant reaches a height of 30-50 cm.
The radical leaves dry out very quickly; the caulines are opposite, finely tomentose, all petiolate with 1-2 cm petioles. The lamina has a circular outline with a diameter of 4-5 cm, is palmatopartita and divided into 7 segments 3-4 mm wide, in turn trilobed with the possible presence of one or two additional laciniae. The lobes have an acute apex. The leaf margin is smooth.
The flowers branch off from a peduncle, hairy like all the green parts of the plant, which measures 6-7 cm; the peduncle bears a pair of bracts in the middle of its length and bears a single pentamer and actinomorphic flower, complete with all the floral organs. The calyx is dialysepal, with lanceolate sepals (3×9 mm), decorated with simple hairs along the ribs and ending in a thin purplish mucron, about 2 mm long.
The corolla is dialipetala, cup-shaped and has a diameter of 25-35 mm. The petals, ranging in color from deep pink (carmine) to purple, faded into white towards the nail, are crossed by 5-7 veins of a more intense color, have an oval shape and are not very deeply bilobed. The ten stamens measure 8 mm; the anthers, purplish in color, are 2 mm long. The ovary is superior, 5-carpellar and surmounted by a 7 mm long purple stylus.
The flowering period is from May to October.
The fruit is a schizocarp made up of 5 smooth mericarps, contained in the lower part wrapped and protected by the increasing calyx, and by a beak, residual of the style, which protrudes from the calyx. When ripe, this beak divides into reste causing the separation of the 5 achenes.

Cultivation –
The Bloody crane’s-bill is a plant that grows preferably on both calcareous and siliceous soils, as long as they have a neutral pH and in substrates with low nutritional values ​​and dry.
The plant reproduces by rhizome but can also reproduce by division of tufts or by seed.
The optimal period for propagation is that of spring after the last colds.

Customs and Traditions –
The genus Geranium has about 30 spontaneous species in Italy. The peculiarity of presenting isolated flowers, rather than gathered in corymbose inflorescences, in umbrella or in pairs on the same peduncle, distinguishes the Geranium sanguineum from most of the congeners.
Only two species share this character, G. sibiricum L., which is a puny plant, has small flowers (10-12 mm) and has 5-part leaves with a triangular outline and G. argenteum L. which it also shares with Geranium sanguineum L. the shape of the leaf, deeply divided into thin trefoil segments, but in addition to 7-part leaves it also has 5-part leaves. G. argenteum L., which differs in habitat, as it colonizes the disintegration material of the calcareous rocky ridges, also differs for the smaller size and for the pink color of the corollas, whose hue tends to orange-vermilion. Numerous cultivars of Geranium sanguineum L. have been selected.
Geranium sanguineum is a plant whose food or cosmetic uses are unknown.
Pharmaceutical uses, on the other hand, are interesting, where pharmacological research is particularly active in some countries which certifies that a polyphenolic complex obtained from the roots of G. sanguineum has proven effective in inhibiting the reproduction of some strains of the influenza virus. Root extracts showed a broad spectrum of antimicrobial activities.
Traditional medicine already uses the roots of this plant as astringent and anti-inflammatory in the treatment of diarrhea, gastroenteritis and dysentery. The plant is also used to treat wounds and as an anti-haemorrhagic.
Other traditional healing properties are those related to occasional uses for vulnerary purposes (heals wounds), astringent (limits the secretion of liquids) and tonic (strengthens the body in general).
The constituents present in this plant include tannins, pectins, flavonoids and catechins.

Preparation Method –
It is recommended to use all parts of this plant, including the roots and the plant can be harvested anytime from late spring to early autumn and is usually used fresh.