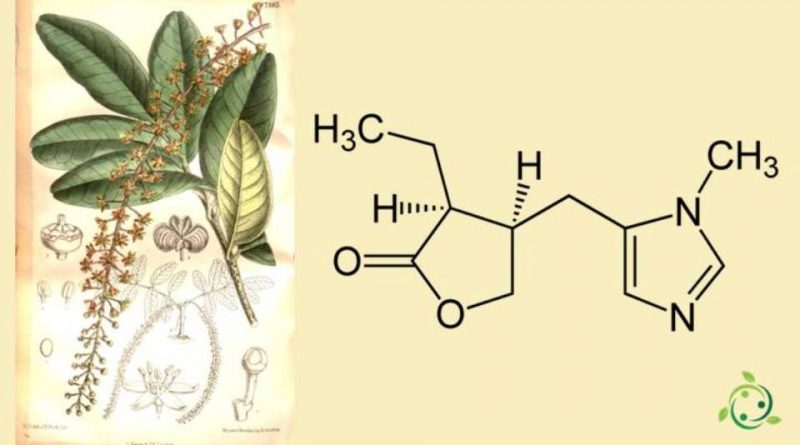 Pilocarpine, whose term in the official IUPAC nomenclature is: (3S, 4R) -3-ethyldihydro-4 – [(1-methyl-1H-imidazol-5-yl) -methyl-2- (3H) -furanone is a alkaloid.
This substance has a brute or molecular formula: C11H16N2O2 and is a heterocyclic compound derived from imidazole of natural origin.
Pilocarpine is found in jaborandi (Pilocarpus jaborandi Holmes, 1892) which is a shrub of the Rutaceae family, native to central-eastern Brazil (Pernambuco, Ceará).
From a physical point of view, pilocarpine appears as a yellowish crystalline solid with a perceptible odor at room temperature.
It is a very toxic, potent cholinergic compound that binds to the muscarinic receptors M1, M2 and M3.
Once taken, pilocarpine significantly increases the tone of the parasympathetic nervous system, with the physiological consequences.
Pilocarpine is extracted from the leaves of Pilocarpus jaborandi and due to its muscarinic parasympathomimetic activity (it interacts with peripheral acetylcholine receptors), pilocarpine is mainly used in ophthalmology as a stimulant for lacrimal secretion.
The term parasympathomimetic refers to its ability to stimulate the activities of the parasympathetic nervous system, which promotes stillness, relaxation, rest, digestion and energy storage; not surprisingly, pilocarpine is also used to promote salivary secretions, while its ability to increase intestinal peristalsis is known.

The main applications of this alkaloid are in the ophthalmology sector. In addition to increasing lacrimation, pilocarpine produces a miosis, that is, a narrowing of the pupil; in the form of eye drops, it has been for a long time the main drug in the fight against glaucoma, although it can be associated with local disorders, such as lacrimation, conjunctival hypermemia and variations in refractions.
Pilocarpine is also used in ophthalmology to reduce the possibility of nocturnal glare in patients who have recently undergone phakic intraocular lens implantation; the use of pilocarpine at low concentrations (1%) would alleviate these symptoms by narrowing the pupil.
Among the side effects for taking pilocarpine are those typical of cholinergic stimulation and are dose-dependent; among those that occur most frequently we remember:
– increased sweating, pollakiuria, bronchoconstriction, nausea, abdominal cramps, diarrhea, flushing of the face, chills, dizziness and asthenia. Sweating, in particular, is the main cause for discontinuing treatment. Not surprisingly, pilocarpine is also used in the so-called sweat test, a useful test in the diagnosis of cystic fibrosis.
Its miotic action (through the activation of the parasympathetic nervous system) leads to a thinning of the iris: the outflow of aqueous humor is thus facilitated and ocular pressure decreases. It is also used for the treatment of Xerostomia.