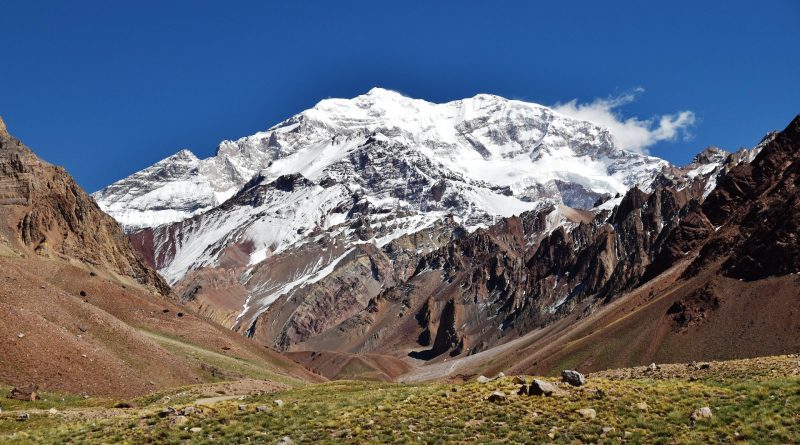 Aconcagua is the highest mountain in the Andes mountain range in South America. It has an elevation above sea level. of 6962 m a.s.l. high and is located in the Argentine sector of the chain.
Aconcagua is also the highest point in the southern hemisphere and in the Americas, a feature that allows it to appear in the list of the highest peaks on each continent, the so-called Seven Summits. From an administrative point of view it is located in the department of Las Heras, part of the province of Mendoza, near the border with Chile, and is also the highest elevation above sea level outside the Asian continent and, after the Everest, is the second most prominent mountain on Earth.
Aconcagua “protects” the sector of the Andes mountain range together with other peaks that exceed 5,000 m. In addition, it preserves glaciers that originate rivers and plains of natural beauty that attract visitors from all over the world. This peak is part of the Aconcagua Provincial Park which is a provincial park located in the province of Mendoza in Argentina.
The park has archaeological values ​​and also the Aconcagua mountain itself was a ceremonial site of the Incas, which is why it is part of the Andean road system “Qhapac Ñan” -Camino del Inca-, declared a World Heritage Site by Unesco.

Geology –
Aconcagua is made up of rocks belonging to the Permo-Triassic period; however, its genesis is of the tertiary era, and is due to the subduction of the Nazca plate under the South American plate in the context of the Andean orogeny.
On the slopes of the mountain there are several glaciers: the main ones are the north-eastern (or Polish) glacier and the eastern (or English) glacier. The first European attempt to reach the summit of Aconcagua dates back to 1883, when a German expedition led by geologist and explorer Paul Güssfeldt attempted to reach the summit from the north-west spur, reaching an altitude of 6500 m. The expedition followed what is now the normal route.

History –
This summit was first reached in 1897 by Matthias Zurbriggen, a Swiss mountain guide working in Macugnaga, of the expedition led by Briton Edward Fitzgerald. The first woman to reach the summit was the French Adriana Bance, on 7 March 1940, accompanied by several members of the Andinista de Mendoza Club. In many atlases, the old measurement of altitude (6959 m a.s.l.) still appears, taken at that juncture. An Italian expedition from the University of Padua, in 2002, found that the exact altitude of Aconcagua is 6,962 m a.s.l. The limit of permanent snow is around 5000 m. The river of the same name descends from one of its sides and reaches the Pacific after a course of 200 km.

Flora –
In this mountain, the high-altitude vegetation adapts to extreme conditions, taking advantage of the hottest season to bloom and reproduce, so the visitor will be surprised by a showy flowering that, for the most part, covers the surface with yellow tones. To shelter from the wind and cold, as well as from the strong summer sun, some plants have a squat appearance and pillow bushes such as yareta, goat horn and yellow wood.
The area is dominated by open grasslands such as huecú and coirones. The inert rocks that reach up to 4,300 m, shelter some perennial herbs such as the tail of the quirquincho and the cockade. The loose streams that run down the slopes feed small meadows and wetlands of green pastures called “vegas”, locally known as the “jungle of the arid Andes”.
These ecosystems are extremely important for their great biological diversity; reeds, sedges and several species of grasses can be seen in its plant cover.

Fauna –
Species present in this region have developed specialized strategies to cope with the extreme conditions of the environment. Mammals, for example, have a rounded shape and a soft, dense coat that allows them to adapt to changes in temperature in this environment. Guanacos, pumas, and foxes have the ability to move to lower regions which are favorable for them in times of snow.
In the case of mountain mice and other sedentary species such as lizards, lizards and toads, they save energy by hibernating and only moving during the day as they cannot travel long distances. Among the amphibians, the Andean toad, endemic to this mountain range, is of particular interest as it indicates the purity of the water.
The local birdlife is also varied, with very small birds such as the Andean hummingbird and larger ones such as hawks, matamicos and the emblematic Andean condor. The most suitable species for human presence are the comeebo, camineras, viudita, gauchito and chingolos, commonly found in the lower fields of the park. The meadows, streams and rivers are populated by water birds such as the crested duck, the creek duck and the banded plover.