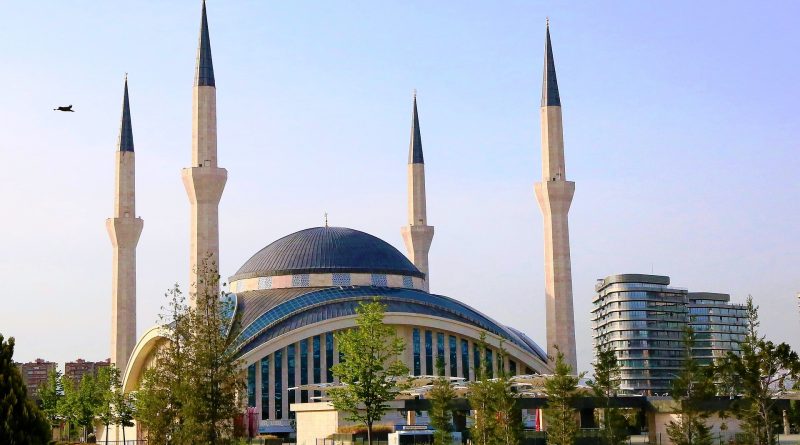 Turkey has been since 1923 a republic and a transcontinental state whose territory extends for the most part in the Anatolian peninsula, in western Asia, and also includes a European part: the extreme eastern part of Thrace, also called European Turkey.
Turkey has an area of ​​783,562 km² and, according to the 2017 census, 80,810,525 inhabitants, mostly the Muslim religion and with small Christian (mainly Orthodox, but also Catholic) and Jewish minorities, while atheism is not widespread. .
Turkey is bordered to the south by the Levant Sea, to the west by the Aegean Sea and to the north by the Black Sea; the Sea of ​​Marmara separates European Turkey from the Anatolian peninsula; to the north-west it borders with Greece and Bulgaria, to the north-east with Georgia, to the east with Armenia, Azerbaijan and Iran, to the south-east with Iraq and to the south with Syria.
The capital of Turkey is Ankara with a population of 4,850,779 as of 2017.
From a historical point of view, Turkey, due to its geographical position has long been a natural bridge between East and West, is home to a rich variety of populations and civilizations.
In this region they have taken place starting from 6500 BC. Hatti, Hittites, Phrygians, Urartians, Lyces, Lydians, Ionians, Persians, Macedonians, the Hellenistic kingdoms (Kingdom of Pergamum, the Seleucid Kingdom, the Kingdom of Bithynia, the Kingdom of Pontus, the Ptolemaic Kingdom), Romans, Parthians, Sassanids , Byzantines, the Crusaders and the maritime republics of Venice and Genoa, Seljuks and Ottomans, all of whom have assumed an important place in the history of modern Turkey.
In addition to the Ottoman one, the main civilization that flourished in Turkey was the Byzantine one, whose dominion lasted for more than a thousand years, until the conquest of the Byzantine capital Constantinople (today’s Istanbul), by the Turks in 1453. There are numerous testimonies , the Byzantine finds and constructions scattered throughout Anatolia, and in particular in the ancient capital, such as the Hagia Sophia.

Geology and geography –
From a geological point of view, Turkey extends over a large part of the Anatolian plate, to the south and west of the Eurasian plate, to the north from the Arab plate and to the north-east from the boundaries of the African plate. Due to the North Anatolian fault, a geological structure with east-west movement and orientation, Turkey is one of the most earthquake-prone regions in the world.
From a geographical point of view, it is a country that extends over two continents. The westernmost part of the Asian continent is constituted by the massive and elevated peninsula of Anatolia which divides the Black Sea from the Aegean and the eastern Mediterranean, occupying 97% of the Turkish national territory. The European part in the north-west, corresponding to eastern Thrace, covers about 3% of the area where the main part of the metropolis of Istanbul is located.
Some Aegean islands and the basins of the Sea of ​​Marmara are also part of Turkey.
Turkey is occupied by mountain ranges ranging from east to west: the Pontic Mountains (Karadeniz Sıradağları) to the north and the Taurus Mountains to the south.
The maximum altitude is reached by Mount Ararat (5165 m); other mountains are Elmadağ, Karabük and Bozdağlar. The Abant Dağları mountain range (maximum altitude 1,794m) is located in the northern part of the country. Among the peaks of the country there is also the Erciyes Dağı volcano, now extinct.
The most important rivers are the Tigris and the Euphrates, in addition to the Kızılırmak, the Meriç, the Ergene and the Gediz.
Watersheds lead to many seas, and part of the territory is occupied by landlocked basins. These latter basins (endorheic) are subdivided into basins with tectonic lakes, shallow, of salt water and devoid of fauna, and into basins with karst lakes, of fresh water and fish rich. 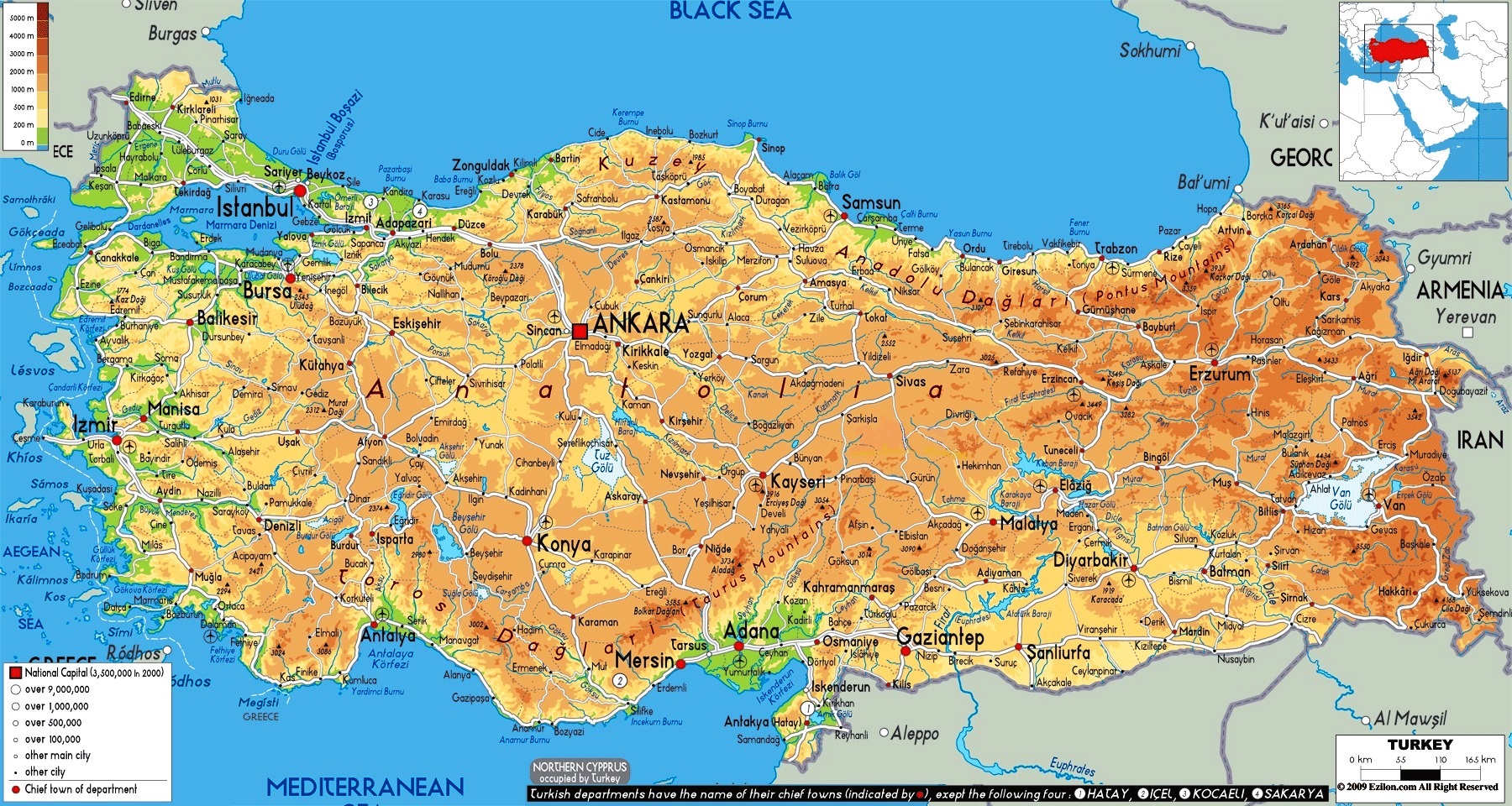 Climate –
Turkey is divided into three different climatic zones: The coast of Turkey overlooking the Mediterranean Sea and the Aegean Sea has a Mediterranean climate, with hot, dry summers and mild winters. The coast of Turkey bordering the Black Sea has an oceanic climate, with hot, humid summers and cold, wet winters. Inside, the climate is continental and, given that the mountain ranges stop the influences of the Mediterranean Sea and the Black Sea, it includes hot and dry summers and cold and snowy winters; rainfall is scarce: in the driest area of ​​the country it rarely exceeds 300 mm.
There is also disparity in rainfall: over 2500 mm per year in the Black Sea area, 1000 mm per year of rain on the mountain ranges while in Ankara we drop to 415 mm per year.

Flora –
In Turkey there are two prevalent plant formations: the steppe in the interior and the forest on the ranges and on the coast.
The coasts of the country are covered by dense forests, especially in the eastern part of the Black Sea coast. The forest that covered the interior of Anatolia has undergone, since the Bronze Age, a systematic deforestation by the man. Only in recent years has an inverse process been implemented, thanks to an ecological-environmental project.
On the Mediterranean and Aegean coasts olive trees, lemons, figs, grapes and vegetables are grown. In the central plateau, steppe vegetation prevails, dominated by grasses.
In the eastern regions, where the winters are longer and colder and the land mainly used for grazing, there are wooded areas and, at high altitudes, alpine vegetation. Deciduous forests and shrub vegetation are found along the Black Sea.
Furthermore the Tulipa which is the name of a genus of the Liliaceae originating from Turkey; is national symbol of the country. A Turkish legend traces the origin of the flower to the drops of blood shed for love by a disappointed young lover.

Fauna –
The fauna of Turkey is particularly rich. The wild boar lives in the forests, while the wolf, the fox, the wild cat, the hyena, the jackal, the bear and the marten live in the most isolated areas.
The Angora goat is bred for the production of precious mohair wool. Among the ornithological species present in the country there are birds of prey such as the eagle, the hawk, the buzzard and the kestrel. Trout live in mountain streams; in the straits tuna and other types of blue fish abound; anchovy (particularly used in Turkish cuisine) is widespread in the Black Sea.
Furthermore, Turkey is the crossroads between three continents and represents a bridge between the breeding areas of northern and southern birds in winter. One of the most important places where birds stop is located between Izmir and Cesmealti
In addition, a cat native to Turkey is the Turkish Angora, a small feline characterized by exceptional elegance, as well as the Turkish van, a native of Lake Van.