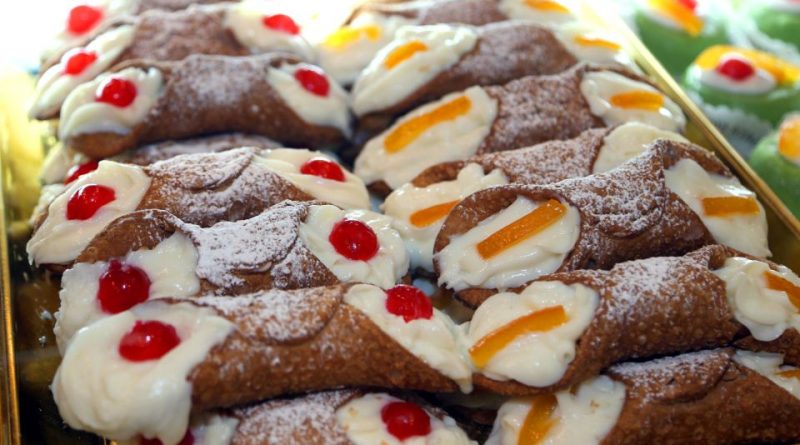 The Sicilian cannolo is one of the best known specialties of Sicilian pastry and has been officially recognized and included in the list of traditional Italian food products (P.A.T) of the Ministry of Agricultural, Food and Forestry Policies (Mipaaf).

Origins and History –
The cannolo owes its name to the river reeds in which the wafer was rolled up until a few decades ago during its preparation.
Its origin is very complex. According to one hypothesis, the sweet was invented in ancient times to celebrate the carnival. Other studies give it as Roman or Saracen origin. The first description of this dessert dates back to Duke Alberto Denti of Pirajno who in his book Siciliani a dining wrote: “Tubus farinarius dulcissimo edulio ex lacte fartus”.
According to the author Pirajno, the definition is to be attributed to Cicero (quaestor of Lilybeo, today’s Marsala, between 76 and 75 BC). In Michele del Bono’s Dictionary: Sicilian-Italian-Latin Dictionary, Palermo 1751, we read verbatim: «Cannola: curled hair. curly. cincinni [for very thin pasta worked in the shape of a torch, full of white to eat. Tubus farinarius dulcissimo edulio ex lacte fartus] », it is clear how the lemma in Sicilian corresponds to the definition in Italian and therefore in Latin.
The writer Pino Correnti, moreover, in his Golden Book of the cuisine and wines of Sicily in reporting the Latin phrase quoted above by De Bono, would only suggest the fact that the definition has been widespread for centuries in a description of cannoli in Latin. . He also claims that the cannolo was invented by the skilled hands of the cloistered nuns of a convent near Caltanissetta, starting from an ancient Roman recipe then elaborated by the Arabs.
Tradition has it that the women of the Harem of the Castle of the ladies of the then Qalc’at al-Nissa (Caltanissetta) were the first to invent the recipe. In this place, according to the tradition handed down to us, the Saracen emirs kept their harems and it was here that the concubines first created it, perhaps as a vaguely phallic homage to their men.
These women, during the long absences of their spouses, to deceive the wait, dedicated themselves to the preparation of elaborate foods and desserts and, always according to tradition, they would have modified an existing Arab dessert, made of ricotta, almonds and honey, reworking it with the Roman recipe cited by Cicero and thus giving life to a specialty that would later become universally known.
With the subsequent end of the Saracen domination in Sicily, the harems disappeared; it is not excluded that some of the favorites, converted to the Christian faith, retreated to the monasteries, taking with them the recipes they had developed for the courts of the emirs. This recipe handed down by Muslim women to Christian sisters was then introduced during the carnival period, and then became of use and production throughout the year.
According to another tradition, the name cannolo derives from a carnival joke that consisted in letting the ricotta cream come out of the cannolo instead of water, in fact cannolo is a dialect term that indicates a tap, or in any case a pipe from which the ‘water.
However, it is likely that real history is an integration of the two traditions.
Although the cannolo was born, according to what has been reported, in Caltanissetta, its success is mainly linked to the pastry of Palermo and its province which helped to stabilize the recipe, as it has been handed down to us today. A variant with dark cream of ricotta and chocolate was instead handed down to us by the pastry chefs of Messina.
In recent times, that is, since 2021 the cannolo (together with the Passito di Pantelleria) is represented in the 5 € coins.

Geographic area –
The Sicilian cannoli, almost certainly born in Caltanissetta, soon became the object of processing and mastery by some pastry schools, especially in the province of Palermo and Messina. Nowadays, cannoli is a processed dessert, according to a typical recipe, although with some variations, as in the Ragusa area, throughout the island it is also consumed outside Sicily.

Raw material –
The raw materials of the cannoli are represented by those for the preparation of the wafer to those for the preparation of ricotta to which other ingredients are then added such as chocolate chips, candied fruit, dried fruit grains, various flavors, such as vanilla or cinnamon.
The wafer is made with various ingredients which are generally: sugar, flour, butter, egg, cocoa, salt, cinnamon, vanillin and, in some cases, Marsala liqueur.
Ricotta is made by various local producers who mainly use sheep’s milk ricotta but also with some variants in which cow’s milk is also present.

Description –
The Sicilian cannoli is a dessert consisting of an external part, consisting of a waffle and an internal part consisting of ricotta or some variants in different creams.
The cannolo wafer is crispy, the inside, traditionally consisting of ricotta made with the possibility of using sheep or cow’s milk or mixtures of these.
Ricotta has candied interiors, chocolate drops, vanilla flavor, and / or cinnamon flavor inside. Furthermore, cannoli are usually decorated with powdered sugar and chopped nuts (almonds, pistachios, hazelnuts) which is placed on the portion of filling that comes out of the wafer.

Production Mode –
To prepare the cannoli, the wafer must be prepared, in the shape of an empty barrel, which must then be filled, preferably before consumption by the stuffed ricotta.
The wafer is a sheet of fried dough (called scòrza) 15 to 20 cm long, with a diameter of 4–5 cm, and a filling made with sheep’s milk ricotta. For the zest, small discs of dough are formed (made of soft wheat flour, wine, sugar and lard) which are rolled up on small metal tubes and then fried, traditionally in lard, today also in less expensive fats.
According to scholars, the flour originally used was the soft wheat flour for desserts Mallorca widely spread in Sicily until the 1950s and today is gradually being rediscovered.
Before modern hygiene laws, the dough was rolled on small cylinders obtained by cutting out normal river reeds, which gave the cake its name, but today they are made of steel. The traditional filling consists of sifted and sweetened sheep’s milk ricotta. Candied fruit and chocolate chips are then added to the filling, and finally the cake is dusted with icing sugar.
In eastern Sicily and in particular in the Ragusa area, by tradition, ricotta iblea (vaccine, often from Modicana cow) is used, with a more delicate flavor than the classic sheep’s milk ricotta.
The secret of the goodness of cannoli is to fill them, if possible, at the time of eating them; this is because, with the passage of time, the humidity of the ricotta is absorbed by the waffle making it lose its crunchiness.
To avoid this inconvenience, some pastry chefs coat the inner surface of the cannolo with melted chocolate: in this way, the wrapper does not become soaked and remains crunchy for longer.
Some variants include a coating of melted chocolate inside the wafer, while others have cocoa powder or coffee to flavor the dough.
However, it is important that they are filled just before serving so that the cannoli wafer remains crunchy.

Gastronomic use –
Over time, the Sicilian cannoli has gone from typical consumption at certain times of the year to a more usual use regardless of the time of year.
The cannoli, once, were prepared on the occasion of the carnival; over time the preparation has lost its occasional character and has experienced a notable diffusion on the national territory, quickly becoming a renowned example of Italian pastry art in the world.
This dessert is normally eaten as a dessert after the midday meal but its spread has increasingly led it to be appreciated and consumed even outside traditional meals.

Sources
– National list of traditional agro-food products, of the Ministry of agricultural, food, forestry and tourism policies, pursuant to art. 12, paragraph 1, of the law December 12, 2016, n. 238 and ss.mm.ii.
– Wikipedia, the free encyclopedia.