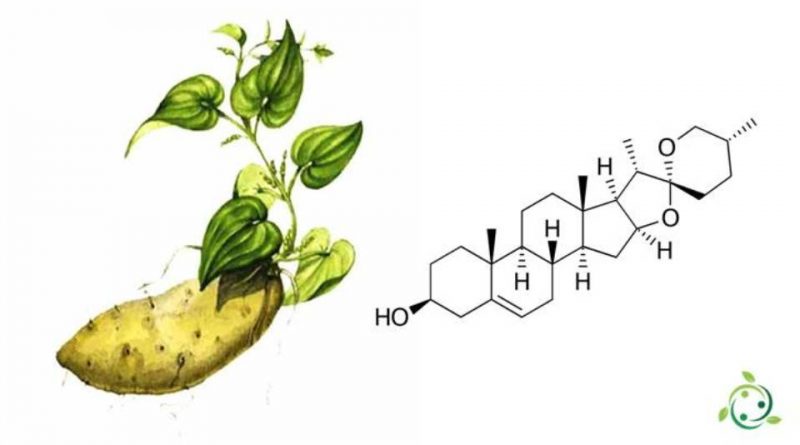 Diosgenin, whose term in the official IUPAC nomenclature is: (3β, 25R) -spirost-5-en-3-ol, is a phytosteroid sapogenin present in the tubers of plants of the genus Dioscorea spp.
Diosgenin has a brute or molecular formula: C27H42O3
Diosgenin is the product of hydrolysis by acids, strong bases or enzymes of saponins, extracted mainly from the tubers of the wild yam (Dioscorea villosa L.), a plant belonging to the Dioscoreacee family, native to Canada and the countries of southern United States.
The sugar-free product (aglycone) obtained from this hydrolysis, diosgenin, is used for the commercial synthesis of cortisone, pregnenolone, progesterone and other steroid products.
Diosgenin, contained in Dioscorea, is therefore a substance similar to progesterone. A kind of natural hormone that turns out to be useful for some hormonal states of women, such as those of those over the fertile age, as an alternative to the usual hormonal treatments.

Diosgenin is therefore a precursor of several hormones, starting with the degradation process of the Marker, which includes the synthesis of progesterone. The process was used in the first production of combined oral contraceptive pills.
Diosgenin, in nature, is present in: Costus speciosus, Smilax menispermoidea, species of Paris, Aletris, Trigonella and Trillium; it is instead present in extractable quantities in some species of Dioscorea.