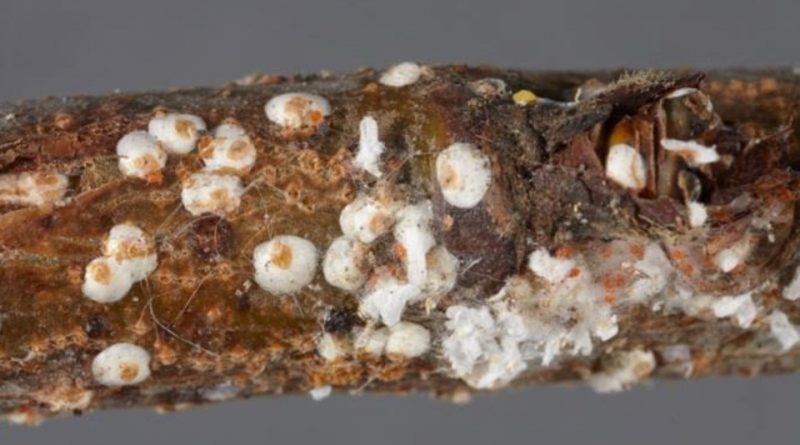 Geographical Distribution and Habitat –
The white cochineal of Peach is of Asian origin and arrived in Italy in the late nineteenth century, first manifesting itself on the Mulberry, then on the Peach and other stone fruit. This species is polyphagous and affects a large number of species such as: Mulberry (Morus), Peach, Cherry, Apricot, Plum and Pear and various Pomace, Almond, Currant, Currant in Clusters, Hazelnut, Walnut, Actinidia, Bean, etc.
The Cochineal invades the trunk, the branches, the branches, but never the leaves.

Morphology –
The white peach cochineal, being a Diaspididae, presents the generational stages protected by a follicle.
The female follicle is whitish, rounded (about 2mm in diameter) and with the central part of orange color. The female is attera and apoda (catametabolia) and is visible by removing the follicle; it has a flattened body, is yellow-orange in color.
The males, which are less than 1 mm in size, as soon as they reach maturity leave the follicle and, flying, move in search of the females to be fertilized.
Male and female follicles are often produced in separate colonies and on different parts of the woody organs.

Aptitude and biological cycle –
The females of the Pseudaulacaspis pentagona winter in the form of larvae at the last stage or of unfertilized females, protected by the badges (or follicles) on the woody organs. In spring, generally in the period from April to May, the females lay under the follicle.
The nymphs begin to come out between May and June and actively disperse looking for a place to fix themselves; found the suitable space they fix and produce the respective follicles.
The flickering of males of this generation generally occurs in June; males fertilize females who begin a second generation in July-August. Females of this generation can:
– winter;
– originate a third generation between August and September.
In this way, this mealybug therefore makes 2-3 generations per year.

Ecological role –
In conditions of high presence of this cochineal, damage to the woody organs can occur, which are determined:
– from the trophic stings of the various stages;
– from the asphyxia in which the organs themselves are found, for the formation of layered follicles.
Due to these presences the plant can go into stress due to the progressive deterioration of the affected parts and, consequently, of the plant in general.
In some cases, the Pseudaulacaspis pentagona can also attack the fruits which, around the follicles, show a chromatic reaction which is evident with a reddish halo (as happens for the Cochineal of San Josè); the attack on the fruits causes serious commercial damage also because they cannot be exported.
The fight against the phytophagus is preventively agronomic and cultural. Agro-ecological cultivation techniques must be implemented avoiding too tight sixths, excessive monocultural specialization, fertilizers based on nitric nitrogen, poor aeration inside the foliage, etc.
In fact, the intervention with the chemical control is a response to a plant design error that cannot be corrected by remaining certain conditions.
If chemical intervention is necessary, the negative effects on the useful entomofauna must be assessed, which will provoke a resurgence of attacks also in the following periods and years.
The traditional chemical control is carried out with vacuum treatments at the fall of the leaves with Metidation or Fentoate added with white oil. In the presence of sleeves of follicles superimposed on the affected organs, it is good practice to brush the trunks and branches before the chemical treatment.
Furthermore, preventive treatments at the end of winter are very important; these are made using Barium polysulphides (in stone fruit) or calcium. These interventions obtain the best results if performed at the pink button stage.
We recommend instead, if necessary, the guided fight.
This is based on the possibility of monitoring, with sexual traps, which allow you to follow, more precisely, the cycles of the insect; in particular, the presence of males is followed which is an excellent parameter for evaluating:
– any subsequent infestations;
– the most probable moment of oviposition.
Traps are set up in the middle of April, with a density of 1-2 traps per hectare or per farm. The chemical treatment is performed at the moment of maximum presence of the first generation mobile nymphs which, in Northern Italy, corresponds to the second half of May. The chitin inhibitor is active on summer nymphs.
In some areas, an experiment is underway with the use of mass-trapping sexual traps; these, in conditions of relative infestation, proved to be able to replace the chemical intervention. In these cases the density of traps is 10 per hectare. With regard to useful entomofauna, it should also be remembered that, among the natural enemies of this mealybug, there are, for its high control activity:
– the Ladybugs, Chilocorus bipustulatus, Cybocephalus rufifrons and Lindorus lophantae;
– the Hymenoptera Aphelinis Encarsia (Prospaltella) berlesei; this was imported from North America (where it was introduced from Japan, the country of origin) in 1906 from Berlese. Currently this Aphelinis is perfectly acclimatized and is an important control factor of the White Cochineal. This aphelinide can be an effective means of biological control, applying the inoculative method; in fact, the branches with parasitized Cochineal colonies can be used to increase the population of the parasitoid in orchards with a low presence of the phytophagous, and consequently with a low density, also of its entomophagus.