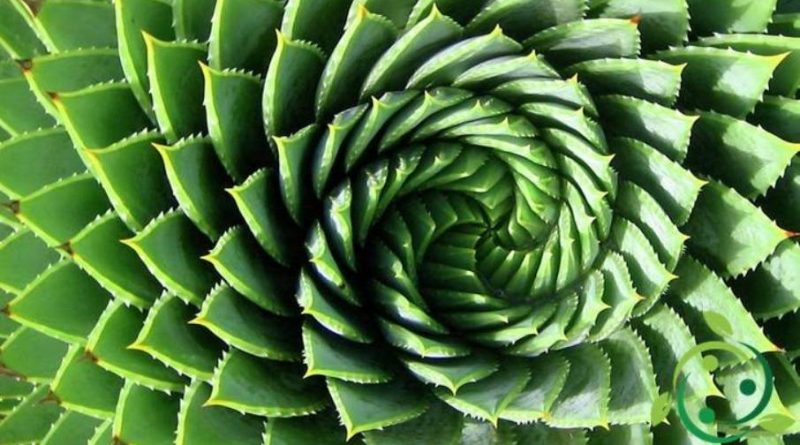 The term phyllotaxis, in botany, means the study of the arrangement of the arrangement of the various organs of a plant species.
The term phyllotaxis comes from the two Greek words phyllon = leaf and taxis = order, therefore, literally, order or arrangement of the leaves.
The study of phyllotaxis leads to the identification of complex mathematical models with which the plant species arrange their organs and parts during morphogenesis (process of plant formation). Among the most recurrent functions, many plants grow following mathematical models attributable to the numerical succession of Fibonacci and the related golden section.
The study of phyllotaxis dates back to historical periods. Already Theophrastus (371-287 BC) had noticed the geometric correspondence of the arrangement of the plants during their growth. Observations in this sense had been made in Pliny the Elder’s Naturalis historia (23-79 AD), while Leonardo da Vinci (1452-1519) was responsible for the first description of the phenomenon according to geometric models; it was precisely the multifaceted genius of Leonardo to observe how some leaves were arranged according to a spiral-like structure, with angles corresponding to 2/5 of a round corner.
However, the intuition of a relationship between phyllotaxis and Fibonacci’s succession is due to Kepler (1571-1630) who first sensed the existence of this link.

The Fibonacci sequence (also called golden sequence), indicated with Fn or with Fib (n), in mathematics indicates a sequence of integers in which each number is the sum of the previous two, except the first two which are, by definition: F0 = 0 and F1 = 1.
However, it came to the nineteenth century so that Kepler’s intuition was confirmed in a series of observations by some botanists, such as Karl Friedrich Schimper (1803-1867) and Alexander Braun (1805-1877) and the crystallographer Auguste Bravais (1811- 1863).
It was precisely these authors who confirmed that there was a general rule according to which phyllotaxis ratios could be expressed as ratios between Fibonacci numbers.
Finally in 1875, the German botanist Julius von Wiesner (1838-1916) gave an evolutionary reading of phyllotaxis. The scholar hypothesizes that phyllotaxis was organized in such a way as to optimize the absorption of light by the plant, as the spiral arrangement allows the leaves not to shade each other.
Subsequently, phyllotaxis, in our groups, made use of botanical observations that aim to identify the number of leaves present on each node and the orientation of these with respect to the leaves of the upper node.
Phyllotaxis has thus evolved from a simply botanical branch branch including cross-studies of mathematicians and botanists, who have revealed a very simple (but incredibly effective) system adopted by plants to generate not only simple structures but also complex spiral morphologies.