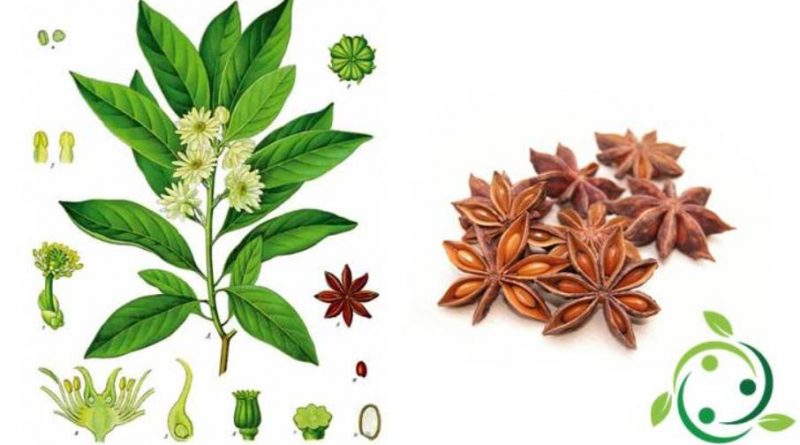 Star anise is a spice from the homonymous plant (Illicium verum Hook.f.) whose aromatic fruits are used.

Origins and History –
Star anise is a very particular spice for its unmistakable eight-pointed star shape and for its intense flavor of licorice and anise, even if it is not related to either of these two botanical species.
This plant, from which the homonymous spice is obtained, has been used since ancient times in traditional Chinese medicine for its stimulating and diuretic properties, in the form of infusion or decoction, as a cure for sore throat; its use is indicated as an appetite stimulant, to combat flatulence and a sense of nausea, in the East it therefore represents a drug even before an ingredient for the kitchen or a refined aromatic and decorative complement for the preparation of potpourri, along with citrus peel, dried flower leaves and fragrant bark.
Star anise was introduced to Europe from China around the 17th century, since then the spice has been used whole, roughly shredded into fragments or reduced to dust.
In Europe it has been used since the beginning for the preparation of syrups, cordials, sorbets and preserves but above all in the flavoring of liqueurs such as Franco-Provençal pastis, and in some cases in the pastry shop as a valid alternative to anise seeds, or in the composed of dried fruit in syrup of figs and pears, in the Near East.
In England since the fourteenth century cakes were made with star anise, as well as bread, such as gingerbread and sweets.
Star anise is grown throughout the Mediterranean basin as well as in Asia, South America and Central America. Its origin, however, is China as well as for peppery anise. In recent years it is also grown in Calabria.

Description –
Star anise is a plant of the Illiciaceae family whose flowers, of a beautiful yellow color, generate numerous fruits with aromatic seeds which when they wilt become leathery and give off an intense anise aroma, due to the high amount of essential oil ( anethole) content.

Active principles –
The star anise uses the pericarp, as said in the shape of a star, “almost” ripe of the fruit.
With star anise you can obtain an aromatic oil, used in the kitchen but also in the cosmetic industry, in perfumery, in soaps, in toothpastes, in mouthwashes etc. Its nutritional values ​​are really relevant: just think that a portion of 100 grams equals 80 or 100 grams of fruit. It does not contain cholesterol and has only 16 mg of sodium.
100 g of star anise bring, on average, 22 Calories and:
– 3 g of carbohydrates;
– 1 g of protein;
– vitamin C (2% of the requirement in a diet of 2,000 calories per day);
– 1 mg of sodium;
– calcium (4% of the requirement in a diet of 2,000 calories per day);
– iron (13% of the requirement in a 2,000 Calorie per day diet);
Star anise is a source of shikimic acid and linalool.

Properties and Uses –
About 90% of the world’s star anise crops are used for the extraction of shikimic acid, an intermediate used in the synthesis of oseltamivir (Tamiflu – antiviral drug for the treatment and prophylaxis of influenza A and B).
This spice, due to the high volatility of its essential oil, should be bought whole, stored in small airtight containers and avoid buying it already ground since within a few weeks its fragrances would be hopelessly dispersed in the air; it also affects the aroma the place of origin and the methods of cultivation.
Its use in the West is often limited to consumption in the form of a mixture, in the mix of the 5 spices (Wu xiang fen), where it is shredded in equal parts together with cinnamon, cloves, fennel and Sichuan pepper, although in China the classic formula can be added occasionally: ginger, galangal, black cardamom.
A fundamental ingredient of the mixture of the 5 Chinese spices, it is added to many traditional Chinese dishes: indispensable in the lacquering of pork and duck, as an aroma of the refined Cantonese dim sum, in soups and sauces based on soy and miso. Flavor together with shoyu, sugar and rice vinegar the refined hard-boiled marbled eggs of hen, duck and quail, of the imperial tradition, the Vietnamese add it in small doses in their national beef and noodles soup, the pho. In India it is highly appreciated in Kerala curry blends, for seafood, or in tropical fruit salads.
Star anise is also an excellent anti-moth and keeps insects away from wool, cashmere and other fine fabrics. It can be crushed and put into veil bags to be used also as a perfume for wardrobes and drawers. In cosmetics it is used to perfume soaps and toothpastes. In the past, around 1500, it was used as bait in mouse traps, hence its name Illicium which means baiting.
The properties of star anise are however many: diuretic, digestive, antispasmodic, aphrodisiac, antibacterial.
It is also a valid adjuvant in case of problems of meteorism, aerophagia, flatulence, cough, cooling. Its consumption is recommended in all cases of heaviness in the stomach, swelling and spasms, especially if of nervous origin. Anise is known, it smells the breath, which is why it helps to combat halitosis problems. Perhaps not everyone knows that green anise essential oil fights lice, so in case of an infestation compresses can be applied to the hair. It also stimulates the growth of healthy hair, helps fight baldness. If applied the anise essential oil on the skin, it helps fight acne but be careful to always dilute it. It is said to open the chakras and connect the various energy levels.
Liqueurs are prepared with star anise; among these we remember the Pastis, from the south of France, especially in Provence, where it is customary to consume a glass of icy Pastis at aperitif time which helps to cool off on hot days. Born in the city of Marseille, Pastis has a high alcohol content, around 40-45%. With the ban in France on the use of absinthe in 1916, the major producers readjusted their recipe by adding anise and sugar and lowering the alcohol content. In addition to this spice, Pastis contains: white and black pepper, cardamom, sage, nutmeg, cloves, cinnamon and liquorice. It is served accompanied by a carafe of water to lengthen it. L’Ouzo L’Ouzo is the Greek version of Pastis. It is a dry liqueur made from grape juice and anise. It is used as a thirst quencher diluted with water.
In addition, among the various liqueurs prepared, Sambuca and, for the production of the typical Marche and Lazio mistrà product, are remembered.
With its ground rind, incense sticks are prepared which are lit in temples in China and especially in Japan, since the plant is considered sacred.
Perhaps not everyone knows that it is used in compositions called Biedermeier, that is inspired by that type of furniture style born in the mid-nineteenth century that enhances the love for the home and the pleasure of spending time among the objects created with DIY you. With star anise, compositions are made with dried flowers, spices and ribbons that also give a pleasant scent. The 8-pointed flowers are therefore also used as a simple but beautiful decoration thanks to their star shape.

Preparations –
For the use of this spice in the kitchen it is recommended to pay attention to the quantity; in fact, not everyone has a sweetish aroma.
To use it in the kitchen you can boil the anise, even just two pods, or two points of the star. Once boiled it can be crushed in a mortar for a fine powder. It is excellent to use in the preparation of broth, soups or soups, especially it goes well with that of onions to give further sweetness. It gives a different touch to dishes based on potatoes, vegetables or roasts. In general it never goes into cooking but is added at the end, just before serving the dish. It can be an ingredient of Garam Masala, while in China, Thailand and Vietnam it is added to pork and goose.
With star anise, a purifying herbal tea can be prepared.
To do this, add to a cup of boiling water: 20 g of dandelion roots, 30 g of milk thistle seeds, 15 g of turmeric root, 20 g of peppermint leaves and 15 g of seeds of anise and cover.
It must be left to infuse for at least 15 minutes then filter and drink.
This herbal tea is excellent for detoxifying the liver.
A particular recipe, where star anise is used, is the one with fig jam, star anise and lemon.
The basic ingredients are:
– 400 ml of alcohol at 95 °;
– 30 g of star anise;
– 3 cloves;
– a cinnamon stick;
– 400 ml of water;
– 300 g of sugar.
It is necessary to obtain an airtight glass jar which must be cleaned and dried well.
You need to pour alcohol, star anise, cloves and cinnamon stick. Put the cap on and leave to infuse for at least a month in a dark and dry place. Then filter the mixture with a strainer.
However, many variations can be prepared here to obtain syrups.