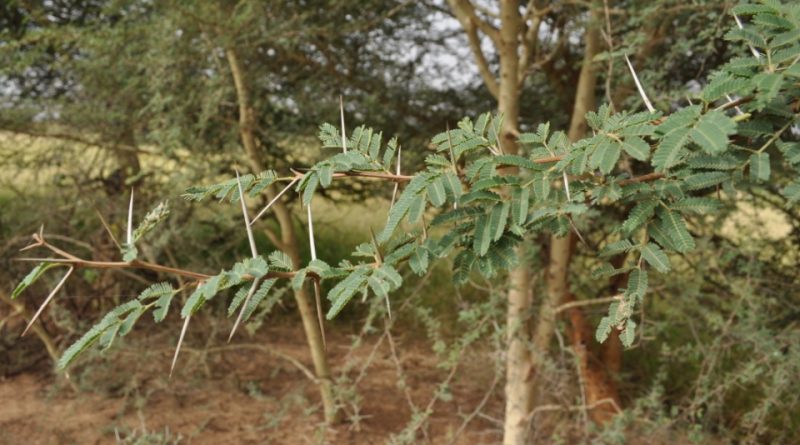 Etymology –
The term Vachellia of this genus was dedicated to the British botanist rev. George Harvey Vachell (1799-1839), chaplain in Macau, who made a significant contribution to the knowledge of Chinese flora.
The specific seyal epithet comes from the Arabic vernacular name of this acacia.

Geographical Distribution and Habitat –
Shittim Wood is a tree present in its areas of origin ranging from Egypt to Kenya and western Senegal. In the Sahara, it often grows in wet valleys. It is also found in the Wadi Rum region which is a valley carved over the millennia by the flow of a river into the sandy and granite rock of southern Jordan, about 60 km east of Aqaba.
Its habitat is that of the semi-arid areas of tropical Africa; it is one of the most common trees in the savannah of Sudan which often occurs in pure forest formations over rather large areas of the country. It frequently grows in groups or patches, sometimes of considerable size, in areas populated by the Senegalia Senegal species at altitudes between 1,700 and 2,000 meters, growing better where the average annual temperature is between 18 and 28 ° C and the average annual rainfall is 250 – 1,000 mm. 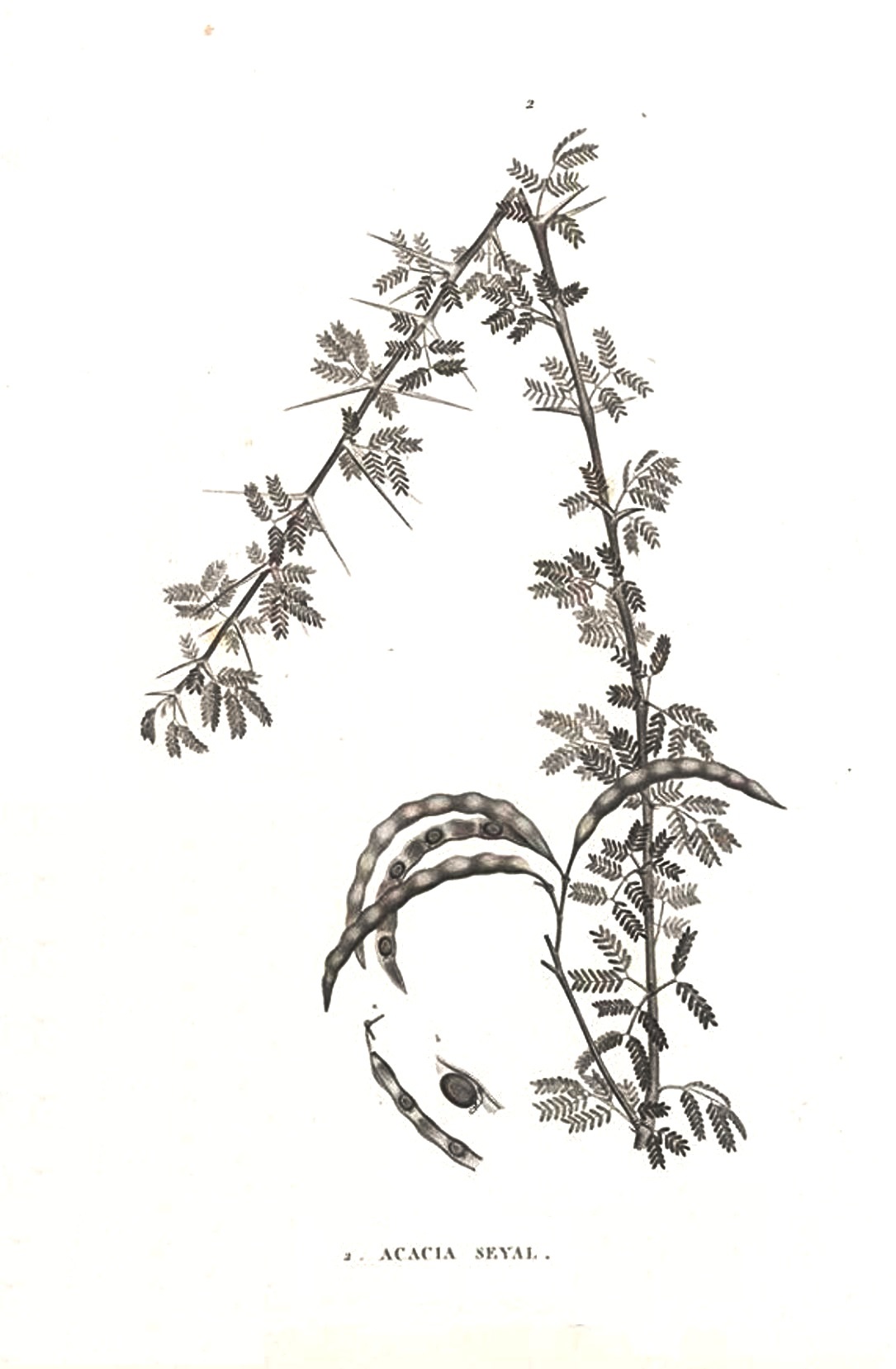 Description –
Vachellia seyal is an evergreen and thorny tree with an open and rounded crown, which can grow up to 17 meters in height but which generally grows between 6 and 10 meters.
The trunk can have a diameter of up to 60 cm, with a greenish or pale reddish bark.
At the base of the feathered leaves of 3–10 cm there are two straight, light gray spines, which grow up to 7–20 cm in length.
The flowers are gathered in round clusters of bright yellow color approximately with a diameter of 1.5 cm.
Flowering is concentrated in the middle of the dry season, with ripe fruits (pods) appearing 4 months later.

Cultivation –
For the cultivation of Vachellia seyal, consider that this species is most commonly found within 12 ° from the equator, especially in semi-arid areas where it prefers well-drained soils with a neutral to acid pH (between 6 and 8).
Generally it prefers heavy, clayey soils, gravelly and stony alluvial soils or humic soils.
It is a plant that also tolerates a certain salinity of the soil and periodic floods as well as wind and salt spray.
Propagation can take place by seed, and in this case, this must be previously scarified to allow imbibition. For this reason it should be immersed in hot water for 24 hours before sowing. The seed germinates best at a temperature of around 21 ° C.
Germination of about 30% of the treated seeds is usually obtained in about 7 days. Germination is often done on wet filter paper to allow rapid identification of viable seeds, which are transferred to deep containers with soil rich in silt as soon as germination is observed.
The plants produce a deep root but do not tolerate the transplant well so they must be transplanted directly to the place where they must be grown.
In plantations managed with a rotation of 10-15 years, 10 – 35 cubic meters of firewood can be produced per hectare per year.
In these conditions it is a plant that brings abundant flowering, perfumed with entomophilous pollination. Bees produce a white honey with a delicate aroma.
It should be noted that Vachellia seyal establishes a symbiotic relationship with some soil bacteria, which form nodules on the roots and fix atmospheric nitrogen. Part of this nitrogen is used by the growing plant, but part of it can also be used by other plants that grow nearby.

Uses and Traditions –
According to a tradition handed down, the wood of this tree was said to have been used in ancient Egypt to manufacture coffins and also the Ark of the Covenant.
Vachellia seyal is, together with other similar species, an important source of gum arabic, a natural polysaccharide, which exudes from damaged stems and solidifies. The gum of this plant is called talha gum, from the Arabic name of the tree: (Talh).
Parts of the tree have a tannin content of up to 18-20%.
Bark is used locally to treat dysentery and bacterial skin infections, such as leprosy. The bark is also used as a stimulant.
The gum is used as an aphrodisiac, for the treatment of diarrhea, as an emollient, for the treatment of bleeding, eye inflammation, intestinal disorders and rhinitis. The gum is used to ward off arthritis and bronchitis.
Incense from wood is used to treat pain from rheumatism and to prevent future mothers from contracting rhinitis and fever.
For these purposes, the tree is harvested in the wild for food, medicine and other products from local populations and produces a rubber that is exported to other countries.
The roots are used to make staves and the bark is used to obtain fbbre with which strings are made. This fiber has promising technological characteristics.
In many areas, farmers have cut the branches of this plant to create fences. Thorny branches are good for this purpose and last about 2 years.
The wood, pale yellow to medium brown in color, with localized brown-pink spots has potential in rural areas for timber production. This wood requires good polishing but is susceptible to attack by insects. Therefore, it must be properly treated by dividing it, immersing it in water for a few weeks and then drying it thoroughly.
It produces a good and dense firewood, highly appreciated and widely used in every part.
A peculiarity of this tree, as of related species, is that in periods of drought it can concentrate high levels of toxin derived from hydrocyanic acid in their foliage, making them dangerous to eat for herbivores.
From an ecological point of view, the root system of plants tends to stabilize soils against landslides, instabilities and erosion.
With the rubber mixed with soot and Nubian sandstone powder, a black and red ink is obtained.
With the smoke produced by burning the wood, fumigation is obtained against insects and lice; in addition, the chemicals present in the bark kill freshwater snails that carry the parasites of bilharzia (parasitic diseases caused by Schistosoma Trematodes) and the algae that grow in the ponds; the methanolic extracts of the bark applied to the ponds show algaecide properties.

Preparation method –
Shittim Wood, as mentioned, also has significant uses in the food sector.
As seen from the bark, an edible gum is obtained which, when eaten fresh, has a slightly acidic taste. This is also mixed with pulp from the Balanites aegyptiaca fruit (desert date) to form a syrup.
The inner fiber of the bark is chewed for its rather sweet taste and the bark is ground into powder and used to prepare a tea.