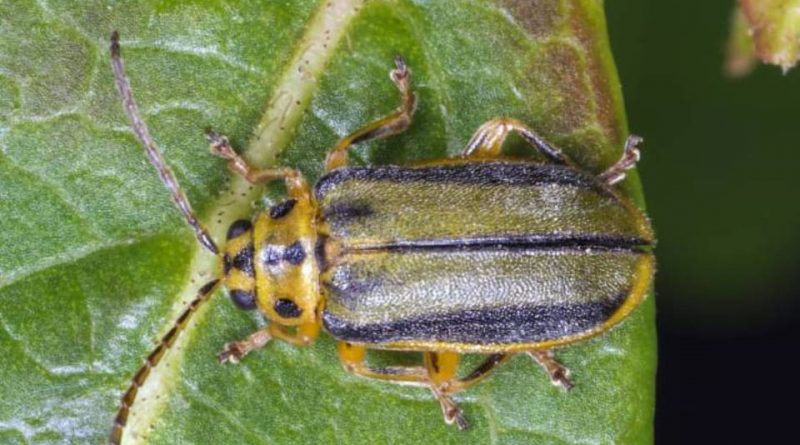 The Galerucella of the elm (Galerucella luteola Muller) is a small beetle belonging to the Chrysomelidae family.

Geographical Distribution and Habitat –
The Galerucella luteola is a small beetle defoliator, both at the adult stage and as a larva, specific of the Olmo. It is a rather common insect in the western part of the Palearctic region, from Portugal to Central Asia. This species is native to Europe and has been accidentally introduced in North America and Australia. its presence was also detected in Argentina.

Morphology –
The Galerucella of the elm is recognized for having a body of narrow and elongated shape, of ocher yellow color tending to greenish covered with sparse hairs. The head is yellowish, with a triangular spot and the antennas are black. The elytrons have a wide black longitudinal band on the sides. Body length ranges from 6 to 8 mm.
The larvae are green or olive colored with four yellow longitudinal bands and numerous bristles on the back; at maturity the larvae are 9 mm long.
The eggs are elliptic, yellowish in color and are placed in groups, on the lower leaf page and more rarely in the upper one.

Attitude and biological cycle –
The Galerucella luteola completes two to three generations a year and spends the winter as a sheltered adult, generally, in the ground at the foot of the plant and in the anfractuosity of the bark. From these shelters the adults come out in the period around the first half of April and reach the leaves, which they feed by poking them. They then mate and lay on the lower page, an operation that lasts for about a month and the eggs are arranged in groups of 10-30 elements. In a short time the larvae are born which reach maturity within 15-20 days, which are active from the middle of May until June, during which they feed on the leaves, of which they leave intact the veins and the upper epidermis. Pupation generally occurs in the ground, under leaves or debris, but can also take place within bark holes and cracks. The adults begin to flicker in June, with a peak towards the end of the month and the beginning of July and give rise to a second generation that ends with the appearance of the wintering individuals starting from the last half of August. The latter, after a period of trophic activity, take themselves, starting around mid-September, to the hibernation quarters.
In favorable weather conditions you can have a third generation that is active in late summer.
The activity of this insect causes damage due both to the adults who eat the flap in sectors, but in a complete way, leaving the leaf more or less pitted, both to the larvae that feed on the leaves leaving intact the veins and the epidermis of the top page.
The affected vegetation dries causing severe vegetative deterioration, especially if the infestation is repeated for several consecutive years, predisposing the plant to attacks by secondary phytophagous (Scolitidi) or diseases such as Grafiosi.

Ecological Role –
The presence of the Galerucella of the elm determines a series of damages related to the various stages of the insect and to the overlapping of the generations. The period of harmfulness is particularly long, following the overlap of the two generations due to the prolonged period of oviposition, damaging the plant from the first half of April until September when the adults, who are going to hibernate, cease to feed.
In the presence of this insect it is possible to intervene in the urban environment by resorting to the distribution of pyrethroids when 25% of the leaves are damaged. Against young larvae one can intervene with Bacillus thuringiensis var. tenebrionis.
In any case the chemical fight against Galerucella luteola is carried out only in case of strong attacks, also to avoid the much more serious indirect damages consequent to the infestation, such as the attack of the Scolitidi or of the Grafiosi.
The treatments are aimed at the larvae; success depends very much on the timeliness of execution and the earliness of the intervention and especially if carried out on young larvae.