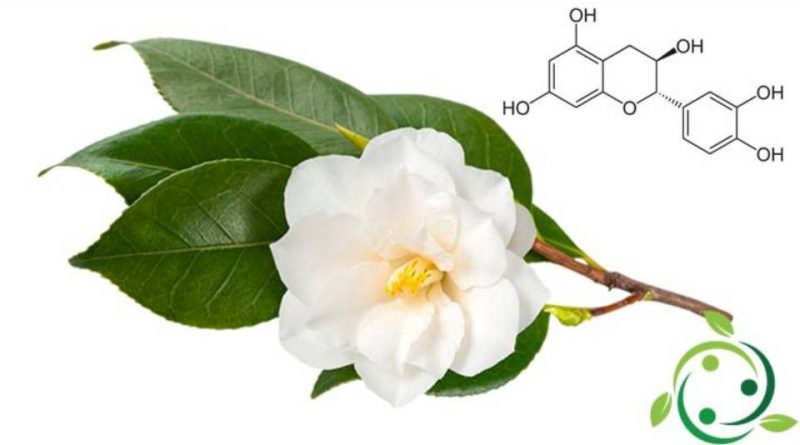 Catechin, whose brute or molecular formula is: C15H14O6, groups a series of substances (catechin, epicatechin, gallocatechin, epigallocatechin, epicatechin gallate, epigallocatechin gallate) antioxidants belonging to the flavonoid category.
The catechins are colorless compounds that oxidize easily, giving rise to browning (for example in wines), are astringent, that is they precipitate saliva proteins making the rough palate feel.
The catechin is contained above all in the tea (Camellia sinensis (L.) Kuntze) and particularly in the green one – where it represents about 20-30% of the dry weight.
The catechin helps to support cardiac functions and helps maintain good health. Additional sources of catechins are found in cocoa, chocolate and wine; they are also well present in the vegetable kingdom (fruit and vegetables).
The interest in the benefits of regular consumption of green tea and its extracts is largely linked to the presence of catechins.

It would seem that there is a relationship between catechin intake and the reduction of cancer. This equation, which emerged from various studies conducted to investigate the role of flavonoids in human nutrition, is attributable to their already mentioned antioxidant action. Once introduced into the body the catechins act by blocking those molecular fragments known as free radicals that can damage proteins and DNA (favoring the onset of tumors) but also the formation, inflammation and rupture of cholesterol plaques that undermine the health of the arteries and of the whole organism (the so-called atheromas).
In addition to having a direct antioxidant action, catechins enhance other antioxidant systems, such as those in which vitamin E is involved. Research shows that catechins have additional health benefits, thanks to their hepatoprotective, immunostimulating and positive effects on blood circulation and blood pressure.
Obviously, the catechins, concur in synergy with other substances contained in fruit and vegetables that, with various mechanisms, collaborate in an optimal state of health of those who implement this diet.
This is why attempts to administer these substances individually through specific supplements have often resulted in disappointing results.