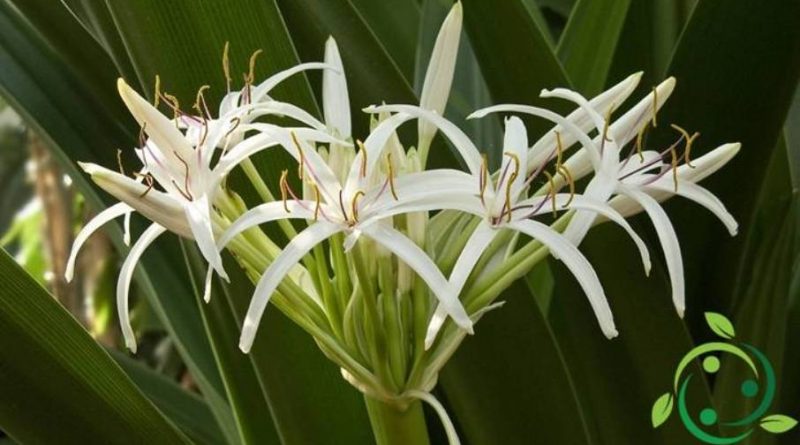 How to grow Crinum

The term Crinum refers to a genus of plants from the Amaryllidaceae family, of African and Indonesian origin; this genus includes species of bulbous plants, of notable development, which have a bulb of large dimensions, tunicate and elongated, which develops on the surface, and in some species shows an extension in the shape of a long neck, which like a stem supports the linear and canalicolate leaves, of large size, of a green-shiny color, up to 1 m long, bring in spring over a large fistulous scape, numerous large funnel-shaped flowers, similar to lilies, with colors ranging from pinkish-white to red with flowering that begins already in spring to continue, in some cases, even in summer.
In this card we will see how to grow Crinum following the most suitable agronomic indications.
In general they are little rustic plants that fear the winter frosts and therefore require a warm and sheltered position, permeable, sandy, rich soil; they must also be removed in greenhouses in regions with harsh winters. Among the species of this plant we remember:
– Crinum asiaticum: one of the species that can be found in gardens as an ornamental plant; it is one of the largest species with stems that touch even 2 meters and with very fragrant flowers. It is an evergreen species that tolerates the cold and does not require any special care for its cultivation. Attention, as this plant can be dangerous for humans, due to its content in toxic substances;
– Crinum bulbispermum: species native to South Africa that grows mostly in marshy areas and in water gardens; has white flowers with a colored stripe, pink or red;
– Crinum calamistratum: species used in large-sized aquariums;
– Crinum latifolium: perennial plant, and used, especially in Asia, where it grows spontaneously, and is harvested for its medicinal properties as a natural remedy. This species can reach 150 cm in height and has fragrant flowers;
– Crinum moorei: this species blooms during the Christmas period, for which it is also called Christmas lily, with white or pinkish flowers that in traditional medicine were used for the treatment of urinary tract infections;
– Crinum natans: it is an aquatic species often used for setting up aquariums. However, it should be placed in very large tanks and aquariums in order to grow rapidly and favor a good development of the leaves and flowers which are white with a pleasant fragrance;
– Crinum powellii: this species reaches heights up to 80-120 cm, similar to Amaryllis, and blooms from August to September, with white or pink flowers; it is a plant sensitive to frosts, so it must be grown in pots and in sheltered places.
For the cultivation of Crinum, taking into account some variables, it must be remembered that being tropical species must be cultivated taking into account certain climatic and environmental needs. In areas with a mild winter climate they can be used in the open ground to decorate gardens, in northern regions it is cultivated in pots.
Let’s see the techniques for the species to be cultivated in the open ground, then in parks and gardens.
In this case we must start in the period between March and April, preferring very fertile soils, to which we can possibly add peat and fertile soils, placing the bulbs at 40 cm from each other and at a depth of about 30 cm. For growing in the garden it is important that you find yourself in areas with mild climates, therefore better in the south, and in areas not subjected to cold and brackish winds.

For the cultivation in pot it is necessary that the container is large enough, so as to allow the root system to grow without problems; this is because the Crinum do not particularly tolerate the repottings.In this case the bulbs must be placed at a depth of about 20 cm; as a rule the soil must be fertile, and a draining layer must be placed on the bottom of the pot, which may consist of very large gravel or expanded clay. The pot should be placed in a very bright area and in a sheltered environment to avoid cold temperatures in winter.
As for irrigation, both of plants grown in the garden and in pots, the Crinum are plants that love water a lot (some are in fact also aquatic, especially in the period from spring until the end of summer. Long periods of drought they could jeopardize its growth, but for this reason drainage should be taken care of, both in pots and in the garden, as stagnation is negative instead.
For fertilizing, it behaves differently if it is grown in the garden or in a pot.
In the garden it is good to add organic substances (such as mature manure or earthworm humus) before the vegetative restart, then in early spring. In this case it is necessary to mix the fertilizer in the soil or first of the insertion of the bulb or before its new annual vegetative cycle.
Instead, in the pots, after the month of March, every two weeks, a liquid fertilizer for flowering plants should be added according to the dosages foreseen for the formulation purchased. Fertilization will stop when the flower is completely open.
For the multiplication of Crinum we proceed both for bulbs and for seeds; clearly the one for seeds is a little slower. The seeds must be germinated in the ground in spring, while the bulbs must first be separated and then left to dry. Then they are planted in the ground, always in the spring period.
In both cases it will be necessary to wait a few years before observing the appearance of the flowers.
Among the pathologies and diseases that can create some problems we include aphids and cochineals among insects and the presence of molds in some cases. To reduce these possibilities we must not exceed in the irrigation interventions and above all in the nitric fertilizations, both in garden and in pot. Nitric nitrogen fertilizers make plants more vulnerable to these attacks and, moreover, they do not favor good flowering.