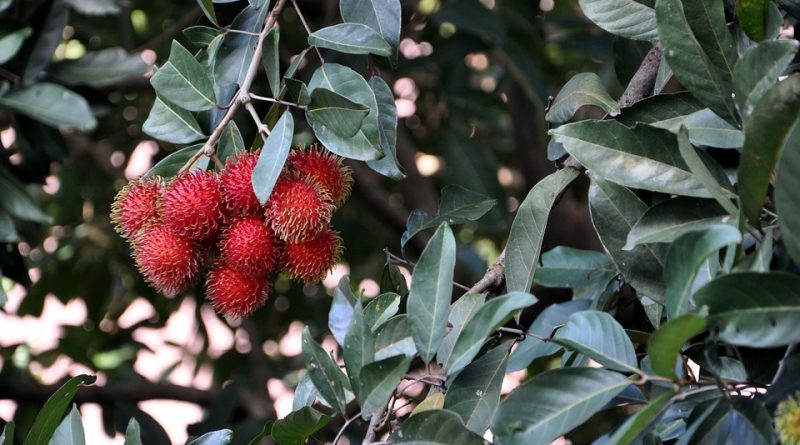 Rambutan (Nephelium lappaceum Lour.) Is an arboreal species belonging to the Sapindaceae family.

Etymology –
The term Nephelium, according to Rembert Dodoens, derives from the Greek νεφέλιον nephélion cloud (in Theophrastus) also used to designate a grass, taken from the Latin nephelion (Pseudo Apuleio Barbaro) for an herb also called personata or personacea (Plinio & al.) , perhaps due to the burdock (Arctium), to which the epithet would refer. The specific epithet lappaceum derives from lappa, the Latin name of the lappola, in Virgil and Pliny; according to some the Latin name derives from the Celtic llap, hand, because the flower attaches itself to whatever it touches it, as a hand would do; according to others it would derive from the Greek λαβεῑν labein sticking, in any case remembering the lappola.
The ordinary name Rambutan derives from the shape and appearance of the fruit and comes from the Malay, “rambout” which means “hair”.

Geographical Distribution and Habitat –
Rambutan is a plant native to the Malay archipelago, very present in Southeast Asia; in the past it has long been cultivated in Thailand, Indonesia and the Philippines. 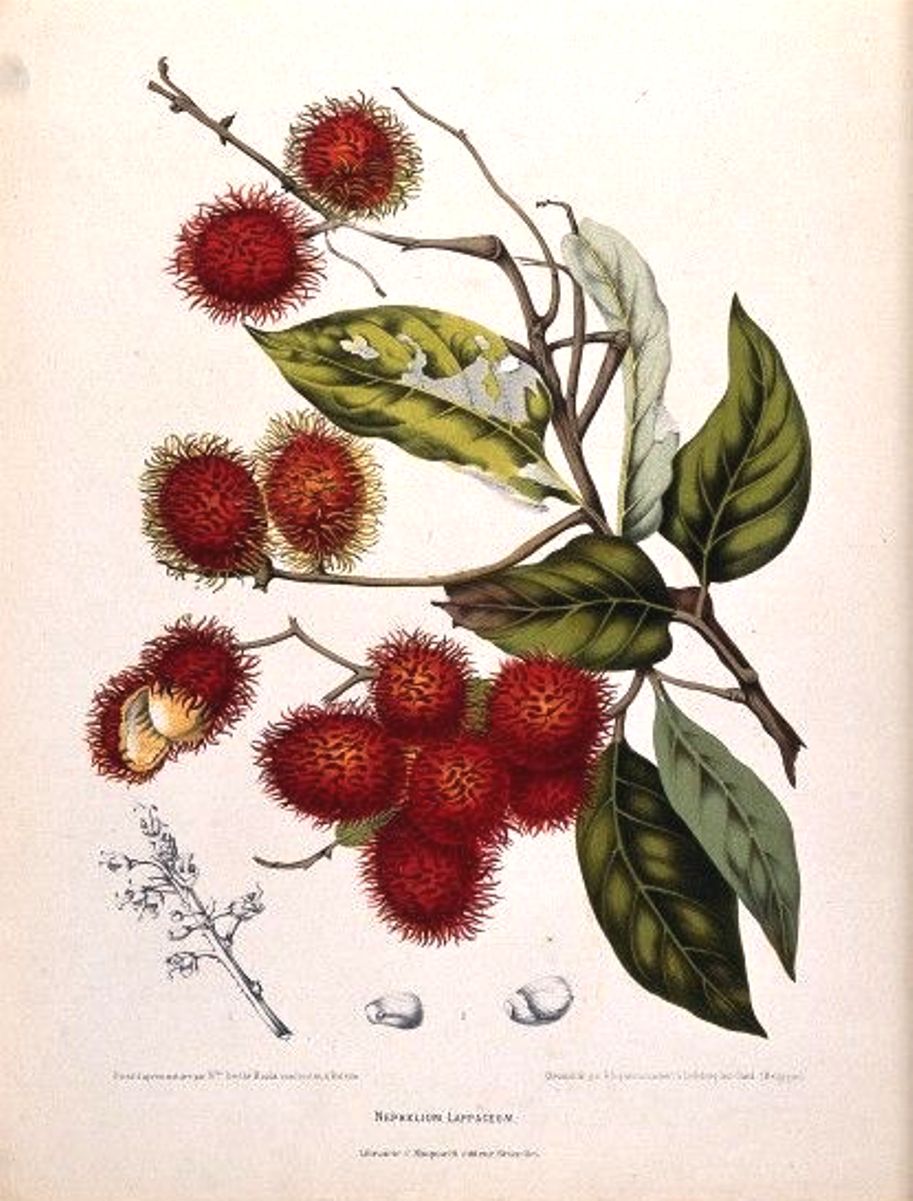 Description –
The Nephelium lappaceum is an evergreen tropical tree that grows to a height of 12-20 m. it has alternate leaves, 10-30 cm long, pinnate, with an entire margin, composed of 3-11 leaflets; each leaflet is 5-15 cm long and 3-10 cm wide. The flowers measure 2.5-5 mm and are apetal and carried in inflorescence. Rambutan trees can be dioecious with male and female flowers on separate individuals or with hermaphrodite flowers.
The pollination is entomophilous, operated by bees, flies and butterflies, only 1-3% of the flowers attach; if done artificially, the fruit setting percentage reaches 13%.
Flowering occurs from March to May and from August to October.
The fruits are spherical or oval drupes, 3-6 cm long and 3-4 cm broad, yellow or red, gathered in groups of 10-20 in hanging clusters. The epidermis is leathery and covered with flexible thorns, the pulp, or aril, is translucent, whitish or pale pink, juicy and with a sweet-sour taste. The only seed is brown, soft, measuring 2-3 cm, with a white basal scar and can be moderately poisonous if opened, but it is cooked and eaten.
The fruit is ripe after about 15-18 weeks after flowering.

Cultivation –
For the cultivation of Rambutan remember that it is a tropical plant that grows in tropical and humid climates. This tree adapts to many terrains except those in which there is water and sand. Ideal soils are alluvial, deep, very rich in organic substance. Crop propagation occurs mainly by cuttings and, less, by grafting. If propagation occurs by seed, trees other than the mother plant are obtained and the fruits are generally harsh. The percentage of male trees is high. The tree bears fruit twice a year and can produce up to 6,000 fruits.

Uses and Traditions –
The fruit of the Nephelium lappaceum internally has a white, translucent, succulent, sweet and very aromatic fragrance. The fruits have a high content of vitamin C, calcium and phosphorus. They are kept for a week at room temperature.
Most commercial cultivars have hermaphroditic flowers, these, unlike the female ones, do not require male pollinators. In the past the propagation was carried out mainly by seed, which led to a certain variety heterogeneity, which is manifested especially in the fruits. The Lebakbooloos, Seematijan and Seenjonja cultivars have a red fruit, in the Seetangkooweh variety the drupe is white-yellowish and the Atjeh Koonig varietal group has a yellow skin. Some cultivars, such as Seelengkeng, resemble the lici in that the epidermis has short torsions. Other varieties common in Southeast Asia are Oh heok, Deli cheng, Maharlika, Jit lee, Rongrien, Chompon and Penang.

Preparation Mode –
Rambutan tastes similar to lychee. It is mainly consumed naturally, removing the pulp from the shell after having cut it in half and having the central seed removed, but it is also excellent for the preparation of jams. Given its sweetness, squeezed the pulp in the tea, it sweetens the drink that served very fresh with a whole fruit inside it is very pleasant and refreshing.