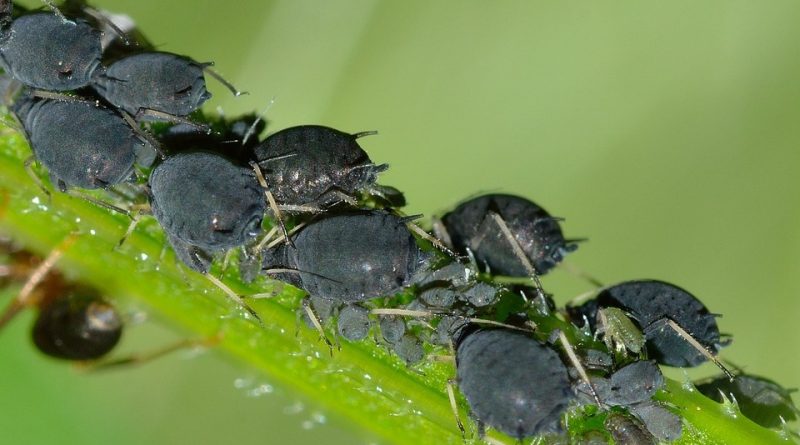 The black aphid of the broad bean (Aphis fabae Scopoli, 1763) is an insect named Rincote omottero of the Aphididae family.

Geographic Distribution and Habitat –
The Fava black aphid is a widespread aphid in almost all the temperate regions of the Northern hemisphere and is also present in South America and Africa, with the exception of Australia. It is a dioecious species with an olocycle between the evidia (Evonymus europaeus), viburnum (Viburnum opulus), philadelphus (Philadelphus coronarius) primary guests and a considerable number of cultivated plants (secondary hosts) such as: Leguminose (broad bean, bean and medical) , Chenopodiacee (beet and spinach), potato, Umbelliferae, Composite.

Morphology –
The Aphis fabae is characterized by a blackish or grayish-blackish or brownish-violet body, with a length of 3.9 mm 3.9, of the winged virginopara form, with siphons about half the distance between their bases; the codicle is as long as it is large, bristly (12-16 bristles). The atheros virginophoric forms have a body of opaque blackish color, with sSiphons and codicles as in the winged form and dimensions of about 2.5 mm in length. The gynopore sessuparies are similar in appearance to the female virginopora with the V antenna segment provided at most with a secondary sensing. The males are smaller than the ginophores and have antennas provided with a dozen secondary sensilli on the V segment. The amphigonic forms have dimensions of 2.5 mm in length, with a brownish-blackish body with very short siphons and posterior tibias with sub circular circular placoids.
The egg is bright black and has dimensions of 2.5 x 0.25 mm.

Attitude and biological cycle –
The black Afide of Fava is a dioicus Afide that winters at the state of egg on primary guests; these are often spontaneous species such as the Viburnum and the Evonyms. The insect, on these primary guests, performs some spring generations, from the period of March to May, before gradually moving on to herbaceous secondary guests, including Chard. Over the latter, some generations take place between the end of spring and summer, also taking on infesting plants such as the Romans that become real inoculum reservoirs and on which they can remain, in some cases, even for a long period of time with paracicli and anolocicli.
The Aphis fabae then lives in colonies on the leaves, on the lower page, or on the floral axes of the host plants. The damage manifests itself on the leaves and on the flower axes and is determined by the trophic action of all the stages of the Aphid.

Ecological role –
The action of the Aphis fabae manifests itself on the leaves where the bites cause profound alterations with more or less showy crumple. On the flower axes (in the seed beet) the bites determine atrophy and deformity. The fruits of Leguminose vegetables are also strongly depreciated for the abundant honeydew and for the presence of the colonies of Aphids.
The host plants are normally: Chard, Leguminose vegetables and open field, Potato and other herbaceous and shrubs spontaneous and ornamental.
The dense colonies of the aphid infest in addition to infesting leaves, shoots and reproductive organs, causing leaf crumplings and vegetative decay are vectors of more than 50 viruses. Among the latter are the agents of the: Common bean mosaic (BCMV), Mosaic and yellowing of the chard (BMV), Potato leaf curl (PLRV).
The fight against this type of aphids requires an integration between agronomic methods, agroecology techniques and, if necessary, careful chemical interventions.
The agro-ecological practices consist in the good practice of the consociations and the rotations with crops that do not host the aphid, in the decrease, if not elimination of the nitric fertilizers. The agronomic struggle consists essentially in the implementation of agronomic practices, such as: the advance of sowing in such a way that at the appearance of the winged birds, which fly to the ground, there will be partially lignified and therefore not hospitable stems. It could also be the elimination of primary guests (Evonimo, Viburno, Filadelfo) in cold areas, where the species performs only the olocycle.
In the case of the necessity of the chemical fight against the black Fide aphid, this occurs when the first infesting colonies are noticed, or with the threshold of 50% of plants with growing colonies (for the Swiss chard).
The intervention with insecticides must however be related to the presence of its antagonists among which we list; among predators: larvae and Coccinellidae adults (Coleoptera: Coccinellidae); larvae of Sirfidi (Diptera: Syrphidae); larvae of Chrysopidae (Neuroptera: Chrysopidae); among the parasitoids: Lysiphlebus fabarum (Marsh) Trioxys angelicae (Hall) (Hymenoptera: Braconidae); we also have entomopathogens: Entomophthora sp. (fungi: Entomptorial zygomycetes).
The products to be used can be specific aficidi, above all on vegetables.