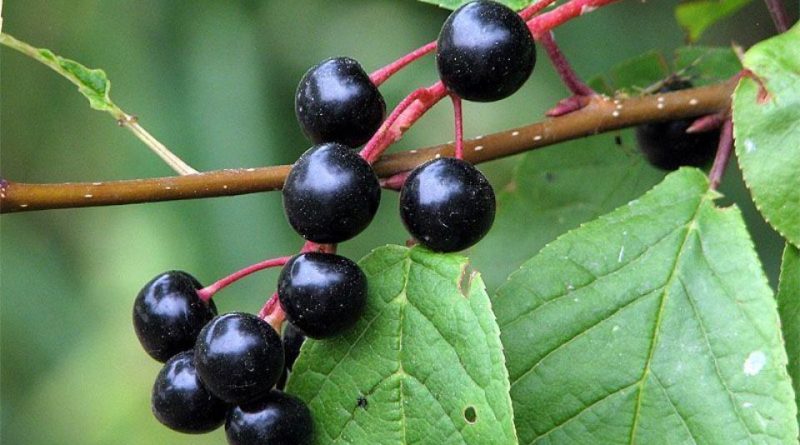 The Bird cherry or hackberry or hagberry or Mayday tree (Prunus padus L.) is an arboreal species of the Rosaceae family.

Systematic –
From the systematic point of view it belongs to the Eukaryota Domain, Kingdom Plantae, Magnoliophyta Division, Magnoliopsida Class, Rosales Order, Rosaceae Family and therefore to the Genus Prunus and to the Specie P. padus.
The term Padus avium Miller is synonymous.

Etymology –
The term Prunus we find already in Pliny, Latinization of the Greek προῦμνη proúmne plum, pruno in Theophrastus and Dioscorides, probably derived from a pre-Greek language of Asia Minor, see also prunum plum, plum from the Greek προῦνον proúnon in Galen. The specific epithet of Padus comes from Padus, Latin name of the river Po: the species is found on the mountain side of the Po Valley-Veneto region.

Geographic Distribution and Habitat –
Bird cherry is a plant with diffusion from Scandinavia and Spain to Western Siberia, with a presence throughout Europe except in the Mediterranean area and in north-central Asia. In Italy it is mainly in the north, especially in the Alps where it can reach the limit of forest vegetation but also in the Po Valley. 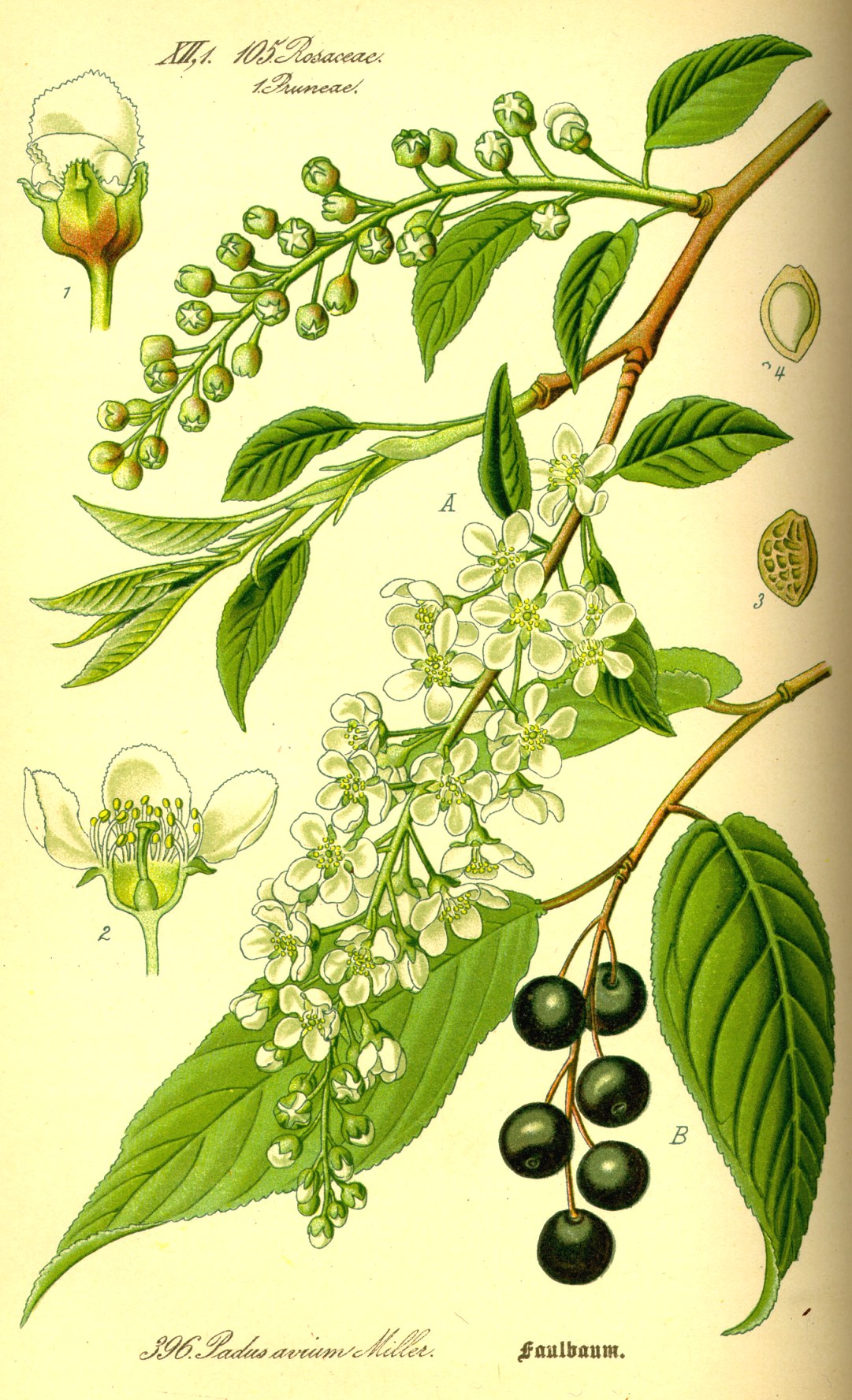 Description –
The Prunus padus is a tree that can reach 15 meters in height, with a dense and expanded call. It presents a straight trunk that becomes a little sinuous with age. It has a peel similar to cherry that flakes in circular ribbons. The leaves are 5-10 cm long, deciduous and alternate, with an elliptical ovoidal lamina and with a finely serrated edge; these present one or two red glands on the petiole near the lower edge of the lamina. The plant bears hermaphrodite flowers, whitish in color, fragrant, up to 1.5 cm wide and arranged in thick, soft cylindrical racemes that are up to 16 cm long. The fruit is a drupe of black and glossy when ripe, present in clusters, with poor mesocarp and endocarp similar to that of cherry.

Cultivation –
The Bird Cherry is a plant that adapts to cold climates and prefers fresh, siliceous soils placed in dim light and is very resistant to soil acidity and can also live in peaty soils. It is however a rustic plant, being able to adapt also to calcareous soils, and it resists well both to the drought and to the humidity. In parks and gardens can be easily cultivated, for the construction of hedges or single specimens. In order to favor a better preparation of the bushes, it is possible to perform cuttings during the resting or even vegetative phase, thus favoring the emission of adventitious lateral jets. If watered and fertilized it grows very quickly.
It is much more resistant than sweet cherry, normally it does not have specific parasites, it tolerates all the most common fungal diseases well and consequently does not require anticryptogamic treatments. As far as propagation is concerned this can be done both by seed and by cutting.

Uses and Traditions –
The Bird Cherry is a species widely used for ornamental motifs, especially in central Europe, also in urban furniture because of its showy flowering. It is also an essence of forest interest.
The use as an ornamental plant, even in private gardens, where the climate allows it is very recommended, as it is a frugal plant, and with an interesting appearance, both in spring with its phenomenal blooms, and in autumn, when the livery has tones ranging from yellow to orange and even amaranth.
In the Middle Ages the infusion with its bark was used as a sedative tonic for stomach ache and considered useful to prevent the plague.

Preparation Mode –
The fruits of the Bird Cherry have a bitter taste for which it is not used in the kitchen. The seeds and leaves of this species contain high amounts of hydrogen cyanide, a poison that gives them the characteristic taste of bitter almonds.