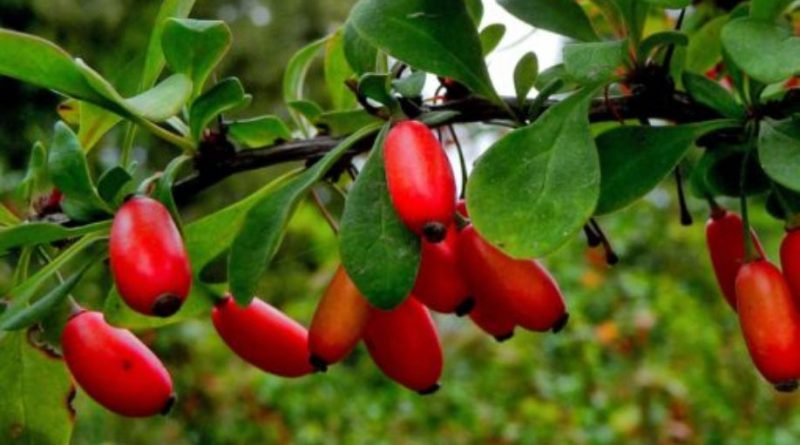 Systematics –
From a systematic point of view it belongs to the Eukaryota Domain, Kingdom Plantae, Magnoliophyta Division, Magnoliopsida Class, Ranunculales Order, Berberidaceae Family and therefore to the Berberis Genus and to the B. vulgaris Species.

Etymology –
The term is the Latinized form of the Sanskrit varvarata, roughness. The specific epithet vulgaris comes from vúlgus volgo: very common, ordinary for the widespread, banal.

Geographic Distribution and Habitat –
The common barberry is a spontaneous species that grows in the arid mountain areas, on the edge of the woods, in the hedges, in the pastures between 100 and 2000 m. 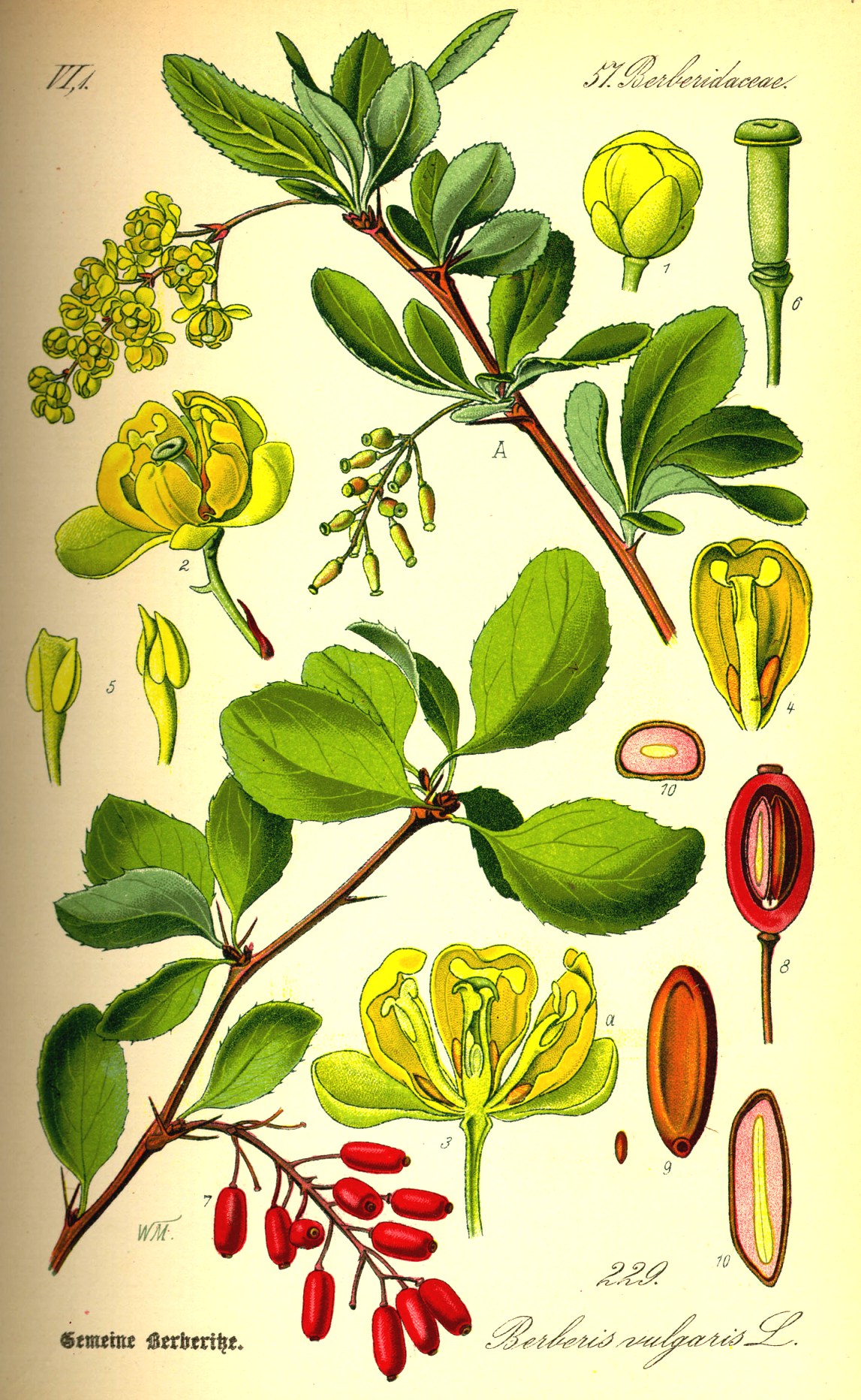 Description –
Berberis vulgaris is a broad-leaved species with shrub or small tree, one to three meters tall with thorny branches; it has large dark roots on the outside and yellow on the inside. The leaves are semi-persistent, elliptic, narrow at the base in a short petiole and rounded at the apex with a wide and shiny surface and serrated margin; they are alternate on long branches or are gathered in bundles on very short branches, at the base of each of which there is a thorn consisting of three to seven stinging prickles. It has small flowers, gathered in bunches of yellow color and with six petals. The anthesis takes place in the period between April and May and the maturation takes place in July. The fruit is a berry, oblong-ellipsoid, red, often pruinose, of 3-4.5 x 5-9 mm, with 2 fusiform seeds, convex plan, brownish of 4.5-6.5 mm.

Cultivation –
Berberis vulgaris prefers sunny places and warm climates, and adult plants also tolerate cold. Soils must be soft, loose, rich in organic matter and well drained.
As for water requirements, the adult specimens are generally satisfied with the rains and therefore should be watered only when the soil is completely dry and during dry periods.
The plant is propagated by seed and by semi-woody cutting in August-September. Sowing must be carried out in November. Propagation by cuttings should be practiced between August and September. The cuttings of semi-woody twigs taken with well-sharpened and disinfected shears should be placed in a mixture of sand and soil. Once roasted, the new plants must be placed in individual containers and grown in pots for at least 2 – 3 years to allow the strengthening of the root system.
The planting in the ground of plants destined to form hedges must be carried out in the period October – April in deep and well drained holes. The plant is resistant and rustic and tolerates quite pruning.

Uses and Traditions –
The common barberry, for its thorns, is also used to make a defensive and impenetrable hedge in the borders of the plots. It is a medicinal herb and a medicinal herb. In fact, it possesses pharmaceutical properties, such as bitter, tonic, astringent, febrifugal, purifying, diuretic properties. The bark of the roots is used as well as leaves and fruits. Some varieties of barberry with red leaves or with yellow berries are used as ornamental and some are evergreen.
When the fruits ripen in the July period they have a sour-sour taste and are not very good. After the first frosts, in autumn, the fruits soften and can be used to prepare jams, jams and syrups with a strong and pleasant flavor. In any case, usually the fruits are not consumed in the fresh state. They are very rich in malic acid (and this is due to their sour taste) and vitamin C. For those who are about to pick the berries, caution is advised because of the terrible thorns. In other culinary traditions, such as the Russian one and especially the Iranian one, the fruits are often used for carbonated drinks and juices but also for meat dishes. In Iran they are usually consumed dry and on special occasions such as marriage.
Barberry berries have been known for more than 2000 and have been used in traditional medicine for the treatment of many diseases; in particular both traditional Chinese medicine and Ayurveda Indian medicine have always used these berries. Despite this, the official medicine still pays little attention to the properties of these fruits, in particular to berberine, a substance contained in the berries that are attributed to many of their beneficial properties.
In addition to being rich in vitamin C, these interesting berries contain a chemical called berberine, a potentially poisonous alkaloid but at the same time curative, so much so that the substance is used for the preparation of homeopathic remedies. Berberine acts as an antibiotic, and exerts a fungicidal and antibacterial action.

Preparation Mode –
The berries of Common Barberry are not consumed fresh. In the last phase of maturation, in autumn, after the first cold nights, they soften and can be used to prepare jams and syrups, or they can be dried. Generally these berries are dried so that they can be kept all year round. In the kitchen dried berries can be combined with salads, bringing flavor and important nutrients. They can also be added to breakfast cereals, along with other nuts such as almonds or walnuts.
With the addition of sugar or honey, the berries easily ferment giving rise to a kind of wine, already known in antiquity with the name of Berber wine. In the Persian kitchen the dried berries of Crespino are used in the kitchen to prepare chicken dishes.