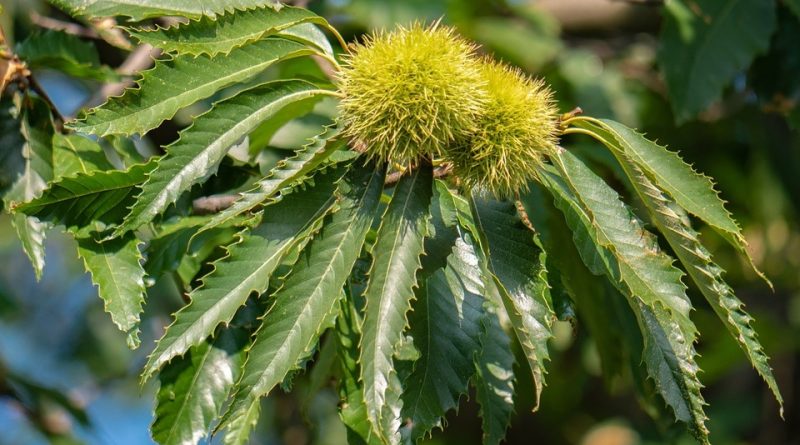 The European chestnut or more commonly chestnut (Castanea sativa Mill., 1768) is an arboreal species belonging to the Fagaceae family.

Systematics –
From a systematic point of view it belongs to the Eukaryota Domain, Kingdom Plantae, Subarranean Tracheobionta, Spermatophyta Superdivision, Magnoliophyta Division, Magnoliopsida Class, Fagales Order, Fagaceae Family and therefore to the Castanea Genus and to the C. sativa Species.

Etymology –
The term Castanea derives from the Latin name of the chestnut tree, probably derived from Kastanáia, a village of Thessaly, famous for its plants. The specific sativa epithet comes from satum (which is the past participle of sero sowing, planting) sown, planted: which is sown or planted, cultivated, domestic.

Geographic Distribution and Habitat –
Castanea sativa is an arboreal species native to southern Europe, North Africa and western Asia. The chestnut tree develops in a circum-Mediterranean circumference, with a fragmented extension, which goes from the Iberian peninsula to the regions of the Caucasus close to the Black Sea. In Europe, the greatest extension of this plant occurs in the western regions. In Italy, chestnut trees are now considerably reduced, although in recent years we are witnessing an attempt to recover not only for production purposes. 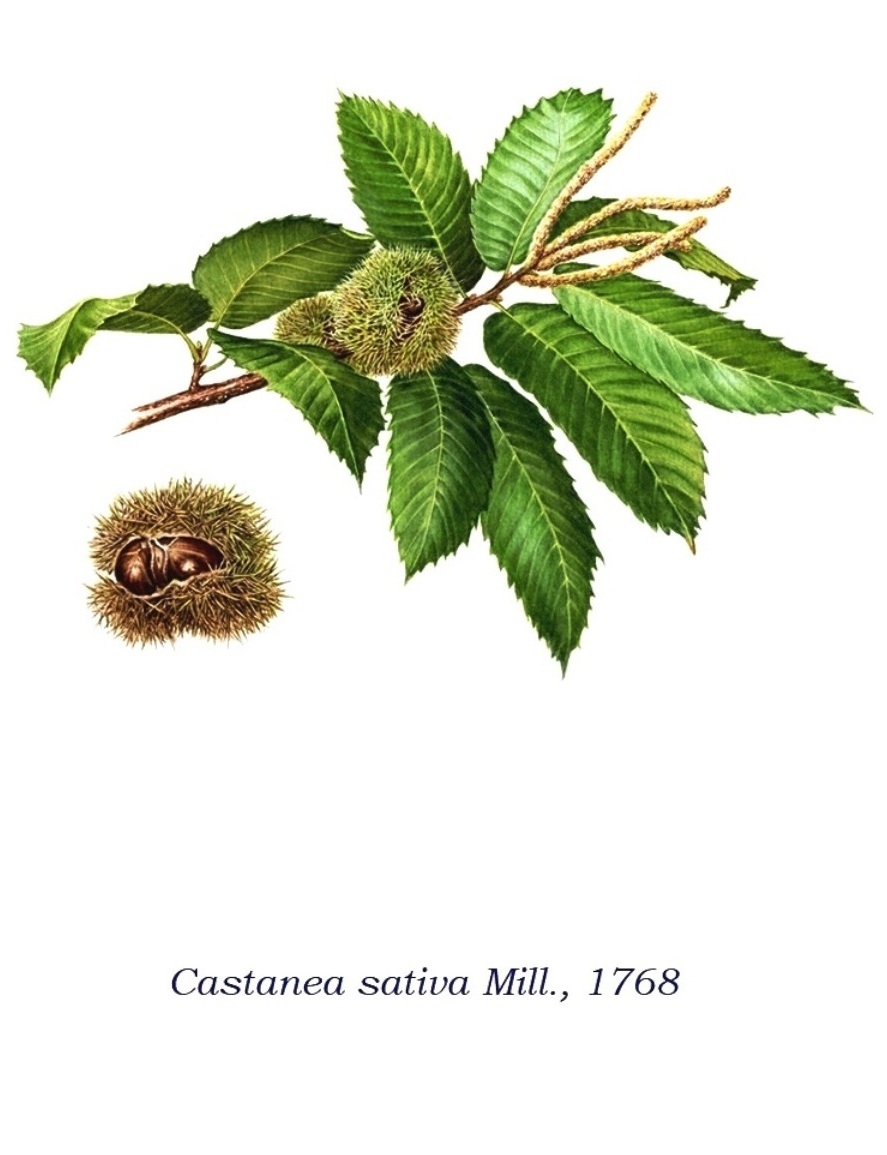 Description –
The European chestnut is a tree, which can reach 25 meters, with conical-pyramidal crown in young specimens, with a tendency to become expanded, globose and irregular adult specimens. The stem is quite straight, with ramifications in the middle upper part, with brownish rind with grayish hues in the adult specimens, gray-hazel in the young ones. The leaves are deciduous, with a serrated margin and pointed apex, of an intense green color and shiny, lighter in the lower part. It is a monoecious plant, with male inflorescences represented by 10-20 cm long, yellow-greenish, female spikes consisting of single flowers or grouped in groups of 2-3 places at the base of the male inflorescences. The anthesis takes place during the summer period. The fruit is a walnut, called chestnut, entirely covered by a thorny dome, called hedgehog.

Cultivation –
Castanea sativa is a mesophilous and moderately demanding species in moisture. It bears the winter cold quite well, which begins to suffer damage only at temperatures below -25 ° C but is demanding during the growing season. For its cultivation, the most suitable range is found in the mountain plain between 600 and 1300 m of the Mediterranean regions or in the high hills further north, but if it finds favorable conditions of humidity it can be cultivated also in the fresh Lauretum stations, thus pushing at altitudes lower. In conditions of moderate summer drought there is a slowing down of vegetative activity and an irregular fruiting. Particular problems create persistent fog and excessive rainfall in the months of June and July which hinder pollination by negatively affecting fruiting.
During the first phase, when the seedlings are young, the chestnut tree tolerates a moderate shading, this fact, which favors a good renewal in the mature woods, but in the production phase shows a greater heliophilia.
From the pedological point of view it prefers well-endowed soils with potassium and phosphorus and humus with pH of neutral or moderately acid soils; it also adapts to a more drastic acidity, while it usually shuns from basic soils, as limestone is moderately tolerated only in humid climates. The preferred soils are those that are loose or tend to loose, while clayey soils or, in any case, easily subject to stagnation are not tolerated. For the cultivation technique, the following sheet can be consulted.

Uses and Traditions –
The chestnut was already known and appreciated by the Greeks for its many potentialities: abundant production of very nutritious fruits, use of timber, bark, leaves and flowers (pharmacopoeia). The Hellenes developed their cultivation by selecting the varieties, and then consumed chestnuts in the most diverse ways (Sparta’s black bread, flour and soups). Greeks, Phoenicians and Jews traded these fruits throughout the Mediterranean basin, whose plant was called “bread tree” from Xenophon (4th century BC). Virgilio gave advice on the cultivation of chestnut, while Martial indicated that in the Roman Empire no city could compete with Naples in roasting this fruit. Instead Plinio told how to make a special bread with chestnut flour that the women fed during the holidays in honor of Cerere, a period when they were forbidden to eat cereals. The Latins cooked chestnuts on the direct flame, under the ashes, in the milk, or as Apicius suggested, to the pan with spices, aromatic herbs, vinegar and honey. During the Middle Ages it was mainly the monastic orders to improve cultivation (reforestation in the foothills), the conservation and transformation of chestnuts. It was then that the profession of “castagnatores” was established, carried out by farmers specialized in the harvesting and processing of these forest products.
The species Castanea sativa is one of the most important forest essences of southern Europe, since it has attracted, since ancient times, the interest of man for multiple uses. In addition to the ecological aspects, this species has been widely cultivated, to extend its range, for the production of timber and fruit, which, in the past, have represented an important food resource for the rural populations of mountain forest environments and, in freshest pre-alpine areas, high hills, as they were mainly used for the production of chestnut flour.
In recent decades the economic importance of chestnut has undergone a drastic downsizing, both for the production of the fruit limited to cultivars of particular value that for the timber. The production of flour, which has a secondary use in the confectionery industry, is greatly diminished.
Chestnuts are rich in starch, while semi-hard wood is used mainly in the manufacture of furniture and support poles for agriculture.
The bark and the wood of the chestnut are particularly rich in tannins (about 7%) and can be used for its extraction, intended for tanneries. Use that, in Italy, has been particularly interesting in the first decades of the twentieth century, when the national tannin industry made extensive use of chestnut trees, but after 1940 it lost importance both for the contraction of this sector and for the appeal, as a raw material, to waste wood.
Moreover, even if marginally, this species is considered officinal plant in the popular pharmacopoeia: for the content in tannins, the bark has astringent properties, which can be used in phytocosmetics for the treatment of the skin. Besides the astringent properties, the leaves are attributed mildly antiseptic and sedative properties of the cough.
Also in the popular pharmacopoeia of some regions, the chestnut pulp, cooked and sifted, is used in phytocosmetics for the preparation of cleansing and emollient facial masks.
On the basis of the production choice, chestnut woods can be divided into chestnut or fruit chestnut trees, coppice woods with a turn that can vary from 20 to 30 years. Also important are wood forests, where grafted cultivars are bred for the production of wood suitable for the production of furniture and other items.
Although pollination is predominantly anemogamous, the male flowers of the chestnut are seeded by the bees, so this plant is considered mellifera.
Because of the richness of complex starches and sugars, they are particularly indicated in the diet of young people, sportsmen and people who practice demanding physical activities.
The amount of sugar makes the chestnut an alternative food for children allergic to cow’s milk or lactose. Chestnut flour meets the needs of carbohydrates in the diet of people with cereal intolerance.
The high content of mineral salts, such as phosphorus and magnesium, meets the needs of trace elements essential to our well-being; they are also considered a true potassium mine, essential substance for the proper functioning of the cardiovascular and neuromuscular systems, an important contribution to increasing our resistance to fatigue, thus improving the working capacity.
Unlike most of the pulp fruits (apples, peaches, etc.) the water content is relatively modest, in the fresh product it is around 50%. Fresh chestnuts have a high caloric content (160 Kcal per 100 g).
The consumption of chestnut is recommended because with its high fiber content prevents gastrointestinal disorders, accelerates the transit of substances in the intestine and exerts beneficial effects on the microflora.

Preparation Mode –
For many, the term chestnut immediately brings to mind the overwhelming taste of roast chestnuts, which are consumed with taste in the cold winter days. But chestnuts can be used in the kitchen to prepare many elaborate and tasty dishes. It ranges from chestnut and ricotta gnocchi to rabbit ragù, for those who like to serve first courses different from the usual, to chestnuts skewers with rosemary without giving up sweets like chocolate roll and chestnut cream or the most classic crumbly strudel with chestnuts . Also with chestnut flour you can prepare countless dishes, both sweet and savory.