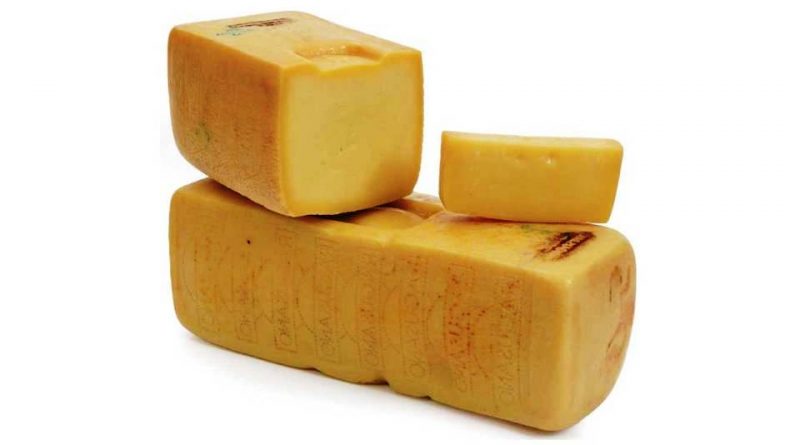 Ragusano or Caciocavallo Ragusano, is an Italian PDO cheese (Protected Designation of Origin) produced in the province of Ragusa and Syracuse.

Origins and History –
Ragusano, which in Sicilian is called Cascavaddu (etymology deriving from drying astride “a cavaddu”) is one of the oldest cheeses on the island and the name derives from the production area which is above all the Province of Ragusa.
Ragusano DOP is also called in dialect “scaluni” because its shape recalls the step of a staircase, or “pruvuluni” – in Sicily it is considered the symbol of tradition and genuineness.
This cheese is the pride of the farms, the characteristic architectural complexes of the Hyblean countryside, built on white limestone, both the home of the farmer and a small dairy where it is handcrafted, according to a recipe that has been handed down for generations.
It is a cheese with a sweet and characteristic flavor, which has been the protagonist of a flourishing trade beyond the borders of the Kingdom of Sicily since 1500, becoming over the centuries the historical and cultural heritage of the island. In 1515 Carmelo Trasselli in “Ferdinando the Catholic and Charles V” tells of an “exemption from duties” for the Ragusa area, testifying to how it was considered a valuable bargaining chip.
Again Trasselli, in Notes on Ragusei in Sicily, reports documents of the “Notary Gaetano, F.106” which still refers to the trade by ship of this cheese. In the work of Abbot Paolo Balsamo, dating back to 1808, “the goodness of the cattle of Modica” and the “products of cheese and ricotta, fifty percent higher than the municipalities, and twenty-five percent higher than the best in Sicily” were emphasized. . Filippo Garofalo in 1856 mentions the fame and delicacy of the Ragusano cheese and ricotta.
This dairy excellence, in 1955, was recognized as a typical product by the D.P.R. n. 1269 of 30 October; in 1995 it obtained the designation of origin (Decree of 2 May) and, the following year, it acquired the community recognition of the PDO, losing the historical name of “Caciocavallo”, with which, moreover, it never had anything to what to do.
The Certifying Body and control body for the production of Ragusano PDO is the Dairy Supply Chain Research Consortium (CoRFiLaC) based in Ragusa. The CoRFiLaC was designated by the Ministry of Agricultural and Forestry Policies, with the Decree of 13 June 2000, as the public authority in charge of carrying out the checks to certify compliance with the requirements of the Disciplinary for Ragusano DOP (D. 13/06/95) and therefore to be able to issue the DOP mark.

Raw material –
Ragusano DOP is a cheese made with raw whole cow’s milk. It has a parallelepiped shape, with a square section, with a smooth, thin, compact rind, of a golden yellow or straw-yellow color tending to brown as it ages. The paste is compact and when cut it has a white color tending to a more or less intense straw yellow.
Ragusano is best preserved wrapped in its own packaging or in silver paper, in glass or plastic containers, in the lower shelf of the fridge, from which it must be removed about an hour before consumption. It is advisable to air the cheese, unwrapping the package, so that it regains its flavor.
It is semi-aged (therefore from 3 to 6 months) and can be used as a table cheese, while it is an excellent grating cheese if aged for more than 12 months.

Description –
Ragusano DOP is a semi-hard stretched curd cheese produced, as mentioned, exclusively with Modica breed cow’s milk.
It is produced in compliance with the production regulations (Provision of 29 July 2003 of the Ministry of Agriculture and Forestry Policies), meeting the following production standard:
The feeding of the cows from which the milk is derived must mainly consist of spontaneous essences and herbs from the Ibleo plateau, possibly hay; the production period is therefore the forage season (November-May). The variety of essences contributes to the characterization of the flavors and aromas of the product, and also contributes to the variability of its color.
The milk from one or more milkings must be coagulated at a temperature of 34 ° C, with a more or less oscillation of no more than 3 ° C, exploiting the spontaneous development of the dairy microflora.
Coagulation is obtained with the use of lamb or kid rennet in paste, dissolved in an aqueous solution of sodium chloride.
The seasoning takes place in ventilated rooms with an ambient temperature of 14-16 ° C, tying the forms in pairs with thin ropes and placing them astride special supports and, in any case, in such a way as to guarantee perfect ventilation of the entire surface of the form. The capping with olive oil is foreseen for cheeses destined to a prolonged aging. The product can only be smoked with natural and traditional processes, in which case the designation of origin must be followed by the wording “smoked”.
Ragusano DOP has a parallelepiped shape, with a square section, with rounded corners. It is possible to find slight inlets on the surface due to the passage of the support ropes used in the seasoning process.
The dimensions are: sides of the square section from 15 to 18 centimeters; length of the parallelepiped from 43 to 53 centimeters.
The weight varies from 10 kg to 16 kg in relation to the size of the wheel.
Externally it has a smooth, thin, compact rind; golden yellow or straw-colored tending to brown with the lengthening of the aging process for grated cheeses. The maximum thickness is 4 millimeters. It can be capped with olive oil.
The pasta has a compact structure, with possible cracks that occur with the continuation of aging, sometimes combined with few holes; when cut, the color is white tending to straw yellow, more or less intense.
The flavor is decidedly pleasant, sweet, delicate, not very spicy in the first months of aging in table cheeses; tending to spicy and savory, with advanced maturation in grated cheeses. The cheese has a pleasant aroma, characteristic of the particular production procedures.
The fat content of the dry matter is not less than 40% for cheeses intended for table consumption, while it is not less than 38% for cheeses aged for more than 6 months; the maximum humidity is 40%.
The nutritional values ​​of Ragusano PDO per 100 grams are:
– Energy value 374 Kcal;
– Fat 30.10 g;
– Protein 28.4 g.

Production Method –
Ragusano DOP is produced with a process that follows an ancient tradition, today carefully observed by the producers. To make this cheese, the milk of one or more milkings is allowed to coagulate, favoring the natural development of the microflora.
To facilitate coagulation, kid or lamb rennet paste is added, along with water and salt. The quantity of solution must be such as to allow the paste to harden in a time between sixty and eighty minutes. The curd is then reduced into small pieces using the iaruozzu, a wooden rod that ends with a disc, and is subjected to pressing to facilitate sponging.
The amount of solution used must be such as to entail a setting and hardening time from 60 to 80 minutes. The breaking of the curd takes place when the granules, initially of comparable size to those of lentils, following the addition of water (8 liters per hectolitre of milk) at a temperature of 80 ° C, plus or minus 5 ° C, take on average dimensions of a grain of rice. The cheese mass, obtained by sedimentation and separated from the whey, is subjected to pressing to facilitate its purging. The pasta, treated with the liquid resulting from the processing of the ricotta or with water at a temperature of about 80 ° C, covered with a cloth in order to avoid sudden drops in temperature, is left to rest for about 85 minutes. The drying phase must be carried out by leaving the paste on special supports for about 20 hours. The pasta is cut into slices and, covered with water at a temperature of about 80 ° C, for a time of about 8 minutes, it is then worked with great care, until a spherical shape is obtained with the external surface free from stretch marks and welded to a pole.
The product is then modeled and then collected in wooden containers called mastredde, which give Ragusano DOP its characteristic parallelepiped shape. The cheeses are placed in brine to obtain salting, where they remain for two to eight days, depending on their weight.
For maturing the wheels are then dropped in brine to obtain salting, where they remain for two to eight days, depending on their weight.
The maturing rooms are called maizzè, fresh, humid and ventilated rooms sometimes underground, there are also cellars and caves with geologically natural walls where the cheeses in pairs are hung astride a wooden beam tied with ropes of liama or cords of cannu, zammarra or cotton. There are also scaffolding, shelves and tools made of wood or other vegetable material for cleaning and handling the cheese during ripening and maturing.

Gastronomic use –
Ragusano DOP is a fat cheese, of medium, long maturation, with a hard and spun paste.
It is used a lot in Sicilian cuisine, it can be marinated with olive oil and garlic, seasoned with vinegar and oregano.
As for the wines, if fresh it prefers a Grecanico, if aged a Nero D’Avola, Merlot, Syrah or Cerasuolo di Vittoria.