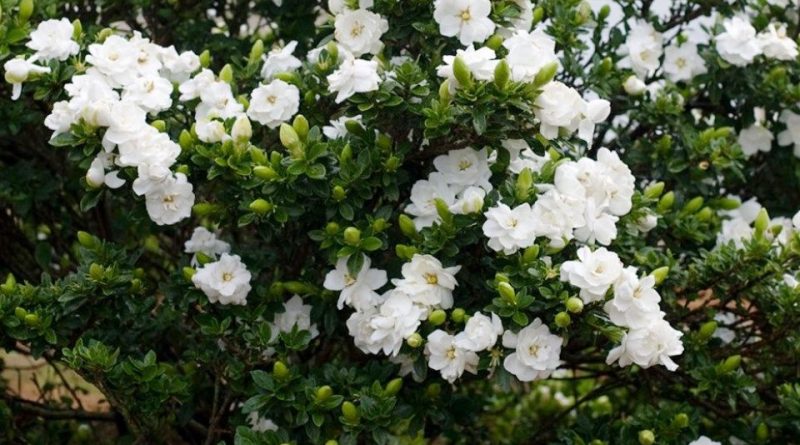 Etymology –
The term Gardenia of the genus was dedicated by Linnaeus to the Scottish botanist and naturalist Alexander Garden (1730-1792), who sent him numerous specimens of plants and animals collected by him in South Carolina (USA).
The specific epithet jasminoides comes from Jasminum (from the Arabic jsmin white flower: due to the color of the flowers of the common jasmine) jasmine and from the Greek εἶδος eídos appearance: similar to jasmine.

Geographic Distribution and Habitat –
Gardenia jasminoides is an evergreen flowering plant native to Asia and is most commonly found in the wild in Vietnam, southern China, Korea, Taiwan, Japan, Myanmar, India, and Bangladesh.
In China, the species is found in the provinces of Anhui, Fujian, Guangdong, Guangxi, Guizhou, Hainan, Hebei, Hubei, Hunan, Jiangsu, Jiangxi, Shandong, Sichuan, Taiwan, Yunnan and Zhejiang.
Its natural habitat is the forest and the undergrowth along the streams, and on sloping and hilly terrain up to a height of 1500 m. 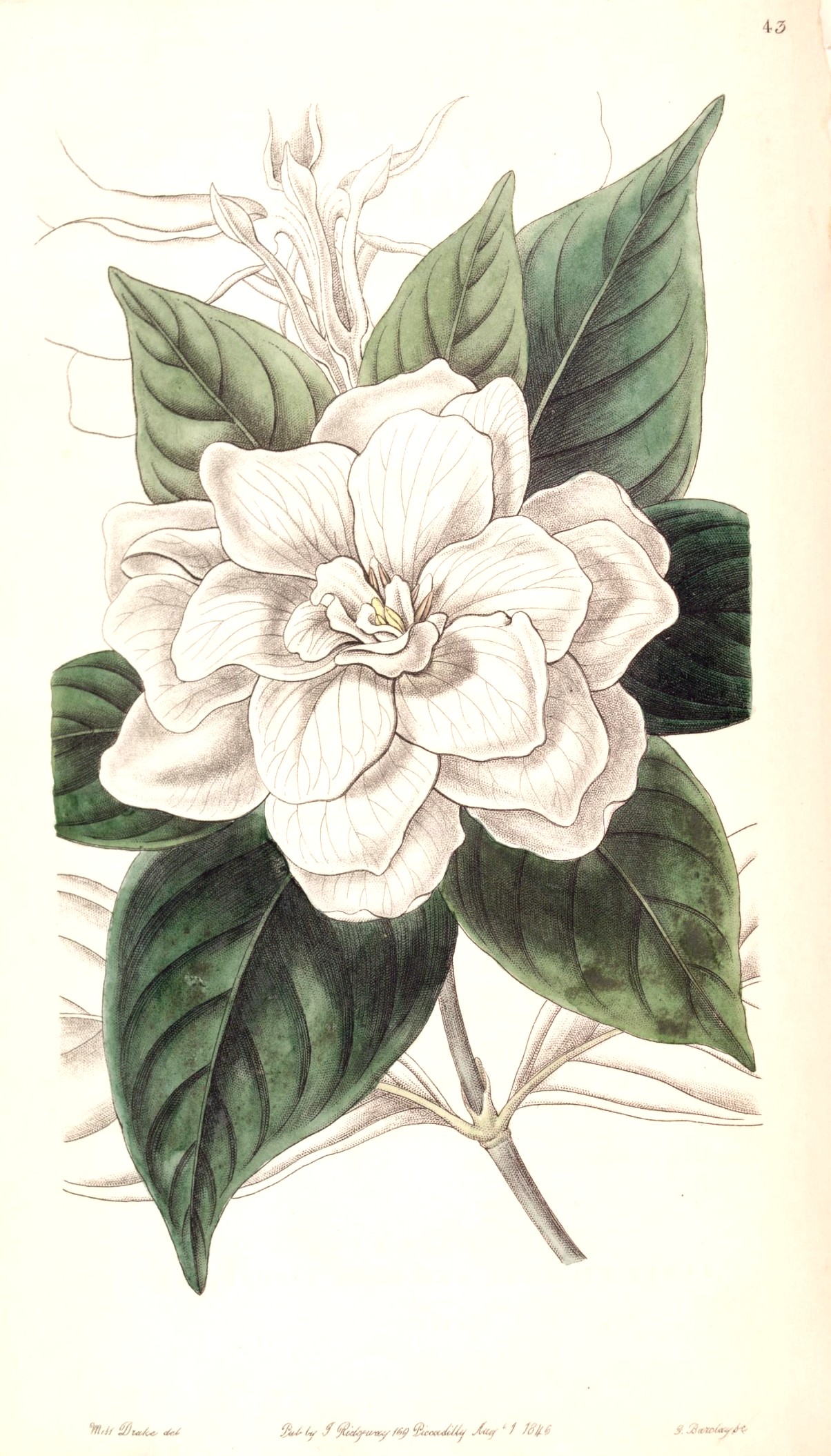 Description –
Gardenia jasminoides is both an evergreen and deciduous shrub, depending on the environment in which it grows.
The plant grows in its natural state from 30 cm to 3 meters and has cylindrical to flat branches that are initially hairy and become smooth.
The leaves are arranged opposite, or rarely in groups of three, along the branches. These are subsessile or on short petioles 0.5-1 cm long. The leaves are 3-25 cm long by 1.5-8 cm in width and can be oblong-lanceolate, obovate-oblong, obovate, oblanceolate or elliptical. Their upper surface is smooth and shiny, or slightly hairy along the primary veins, while the lower surface is slightly hairy. Each leaf has 8 to 15 pairs of secondary veins.
The flowers are solitary and terminal (deriving from the ends of the stems), funnel-shaped with simple, semi-double or double corollas; they are white in color and have an opaque texture, in contrast to the glossy leaves. Gradually they take on a creamy yellow color and a waxy surface. They can be quite large, up to 10 cm in diameter, in the shape of a loose funnel and double in shape.
The antesis is in the period from summer to autumn and they are among the most strongly scented flowers.
The fruits are small and oval in shape.

Cultivation –
This gardenia species is widely used as a garden plant in warm, temperate and subtropical climates. Can be used as a hedge.
The plant requires good drainage and a sunny location and prefers acidic soil with a pH between 5.0 and 6.5.
Being a subtropical plant, it thrives best in warm temperatures above 5 ° C and in humid environments.
For this reason its cultivation in temperate latitudes is rather difficult, which is why gardenias are usually grown as houseplants or in greenhouses. In warm places, however, it can be grown outdoors. In any case, he prefers intense indirect sunlight or partial shade.
Aside from the difficulties in creating proper conditions for plant life, gardenias must be planted in acidic (it is calcifugal) soil. If the soil is not acidic enough, many of its nutrients (especially iron compounds) will not be available to the plant, as they will not dilute in water, so they will not be absorbed by the roots. If this happens, gardenias begin to develop chlorosis, the main symptom of which is yellowing of the leaves.
For this reason, it is recommended not to water gardenias with very hard water (containing calcium carbonate salts). When watering with this type of water, it is advisable to add a little vinegar or lemon juice before doing so, this will lower the pH of the water, or use an effective pH modifier, such as phosphoric or nitric acid.
An iron chelate can also be added to the soil to lower the pH, but care must be taken as an overdose can kill the plant, as with any other inorganic soil improver.
Some gardeners pour vinegar over the soil to effectively keep the pH low and prevent chlorosis. This can be done regularly or when the first symptoms of chlorosis have been identified.
There are many cultivars of this species, of which the double-flowered forms are the most popular. G. ‘Radicans’ is a low-growing groundcover that reaches 15–45 cm and extends up to one meter in width, while G. ‘Fortuniana’ and G. ‘Mystery’ are double-flowered cultivars.
The G. “Aimee” cultivar is an early flowering form (spring). Cultivars such as G. “Shooting Star” and G. “Chuck Hayes” are more resistant to cold. A cultivar called “Summer Snow” is distinguished by its large flowers and grows only in climatically suitable environments. ‘Crown Jewel’ is a dwarf variety that has survived for several weeks below freezing.
Unlike other varieties, G. ‘Golden Magic’ bears flowers that quickly turn white to golden yellow relatively soon after opening. This cultivar grows up to 1.5m high and 1m wide.

Customs and Traditions –
Wild plants of this species range from 30cm to 3m.
The plant is grown widely in gardens of temperate and subtropical climates and as a houseplant in temperate regions. It has been cultivated in China for at least a thousand years and was introduced in English gardens in the mid-18th century. Many varieties have been bred for horticulture, with low growing, large and long flowering forms.
Pacific Island Polynesians use fragrant flowers in their flower necklaces, which are called Ei in the Cook Islands, Hei in French Polynesia, and Lei in Hawaii.
Gardenia flowers can be eaten raw, pickled, or preserved in honey.
The fruit of Gardenia jasminoides is used in traditional Chinese medicine to “drain the fire” and treat some febrile conditions, with an anti-inflammatory and antipyretic effect.
Shishihakuhito is a Chinese herbal medicine composed mainly of gardenia fruit, used to treat atopic dermatitis as it inhibits the release of IgE mediated histamine.
However, it should be remembered that in 2020 a case was published of a woman who developed a bluish-gray discoloration of the skin due to the chronic intake of gardenia fruit extract.
From a biochemical point of view, the fruits of this plant contain genipin iridoids and geniposidic acid.
Crocetin (a chemical compound usually obtained from Crocus sativus) can also be obtained from the fruit of G. jasminoides.
The fruit also contains crocin which is used as a yellow dye in food or for clothes.

Preparation Method –
The fragrant flowers of the gardenia are used to perfume tea; these are also sometimes eaten raw as a delicacy, in brine or preserved in honey.
The pulp of the fruit is used in China and Japan to color some foods yellow.
Some extracts are commercially available in Japan where they are used to color boiled meats.