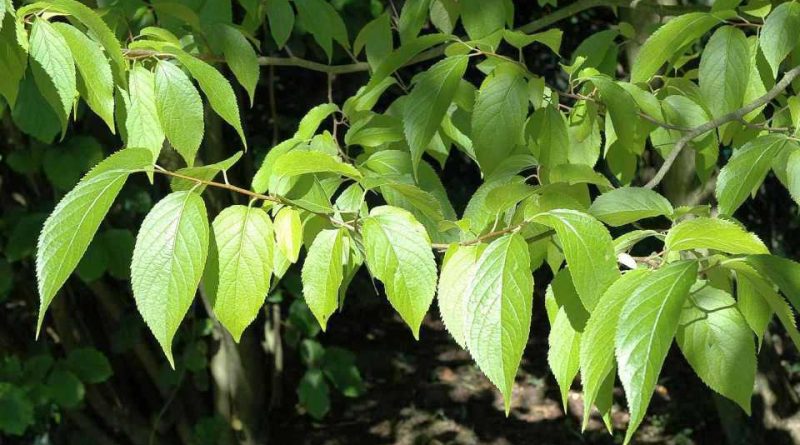 Geographic Distribution and Habitat –
Dùzòng is a plant from central and southern China and from East Asia.
Its habitat is that of mixed woods, sparse woods, thickets, in low mountain areas, ridges, valleys, arid ravines; Furthermore, this plant is widely cultivated and distributed locally in the process of naturalization, at altitudes between 100 and 2,000 meters above sea level. 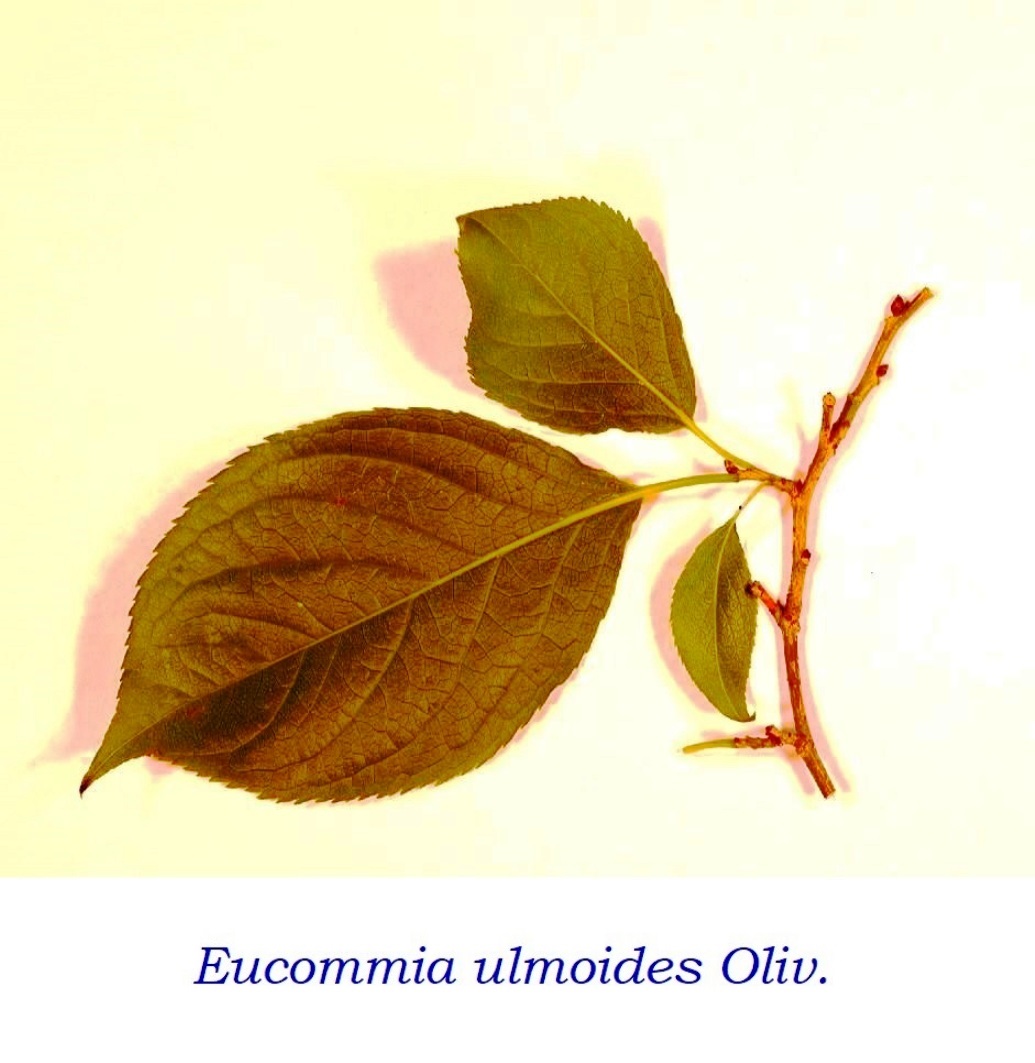 Description –
Eucommia ulmoides is a dioecious deciduous tree, characterized by a wide crown.
This plant can grow up to 20 meters high and 15 meters wide.
The leaves are deciduous, arranged alternately, simple ovate with a sharp tip, 8-16 cm long and with a serrated margin. From the laceration of the leaves, threads of latex exude which solidify into rubber and hold the two parts of the leaf together.
The flowers are inconspicuous, small and greenish in color.
The fruit, present from June to November, is a winged samara with a seed, very similar to that of an elm, 2-3 cm long and 1-2 cm wide.
The antesis is between March and May.

Cultivation –
Eucommia ulmoides is a very cold-resistant plant which, if completely dormant, can withstand temperatures down to about -20 to -25 ° C.
It grows in any moist but well-drained soil and in a sunny position sheltered from cold winds.
It prefers a good clay soil, with a high pH.
Adult plants are very resistant to drought.
This species is commonly cultivated in Russia and China, both for gutta-percha (a macromolecule of vegetable origin very similar, in chemistry and origin, to natural rubber or caoutchouc).
This molecule is extracted using different solvents and the residue can be used for energy production.
To obtain this resin, trees about 10-20 years old, at least 15 cm in diameter, are shelled. Care must be taken to spare a third of the bark each time.
3-4 year old plantations for gutta-percha production produce 200-250 kg of gutta-percha per hectare.
The plant can be propagated by seed which must be sown as soon as it is ripe in a cold greenhouse, stratifying it and storing it for 3 months at 2 ° C. Germination is generally good and occurs in the first spring.
When the seedlings are large enough they can be transplanted to their permanent locations in late spring or early summer after the last frosts.
It can also be reproduced by wood cutting, half-ripe, in the period between July and August in the greenhouse.

Customs and Traditions –
Dùzòng, also called or Gutta-percha Tree (but it has nothing to do with the Gutta-percha Tree of Southeast Asia or with the rubber tree of South America), is a plant that is harvested in nature to be used as a medicine and source of materials. It is an economically important plant in China, used for phytotherapy and the organic chemical industry, and is also cultivated in Korea and Vietnam and in other countries.
Eucommia ulmoides, although widely cultivated, has become a species in nature. The population size is believed to be less than 1,000 mature individuals. The main threat to this species is over-exploitation throughout its natural range and coupled with high rates of deforestation, the species is a matter of conservation concern. The plant is classified as “vulnerable” on the IUCN Red List of Threatened Species (2013).
This tree is also occasionally planted in botanical and other gardens in Europe, North America, and elsewhere, being of interest as the only tree that produces cold-resistant (at least down to -30 ° C) rubber. Fossils of other Eucommia species have been found in lignite deposits aged between 10 and 35 million years in central Europe and extensively in North America, indicating that the genus, in the past, had a wider range and range of species .
This plant represents one of the 50 basic herbs used in Chinese herbal medicine, where it is called in Chinese: 杜仲. Due to the low production and high demand for natural rubber in China, a unique process has been developed to produce elastic materials with Eucommia ulmoides (EUG) rubber as a substitute for natural rubber products. Unlike the latex used to make natural rubber, EUG is the trans-1,4-polyisoprene polymer. Therefore materials made with EUG can show characteristics different from those of natural rubber, such as greater elasticity, lower thermoplastic temperature, etc.
For this reason, its cultivation is widespread throughout China.
The leaves of this plant are used as a base for drinks.
It is considered an excellent tonic for the kidneys and liver and is thought to work specifically on the lower body.
There is also a lot of interest in its ability to reduce high blood pressure. In a clinical study involving 119 people, 46% of those treated with the herb showed a significant reduction in blood pressure, although it appears to have little effect in cases of severe hypertension.
The cortex is analgesic, anti-cholesterol, aphrodisiac, purifying, diuretic, hepatic, hypotensive, sedative, tonic and vasodilator. Its use, as mentioned, lowers blood pressure (the pan-fried bark is stronger than raw and a decoction is stronger than a tincture) and reduces the absorption of cholesterol.
It is also used in the treatment of impotence, frequent urination, low back pain, lower body weakness, back and knee pain, high blood pressure and the threat of miscarriage.
The flowers and fruit are astringent.
Among other uses, it should be noted that a gum is obtained from the sap, but not in commercially valid quantities.
The leaves contain 3% by dry weight of gutta-percha, a non-elastic rubber used for lining pipes, insulating electrical cables, filling teeth, etc.
A bark extract is used as an ingredient in commercial cosmetic preparations as an antioxidant and skin protector.
Wood is used to make furniture and to make Pattens (a type of shoe with a raised sole).
Wood is also used as a fuel.
From the chemical point of view in this plant there is geniposidic acid which is an iridoid glycoside.

Preparation Method –
The bark of this plant is used both sautéed and raw, from which a stronger decoction than a tincture is obtained, which serves to reduce cholesterol. Furthermore, an extract from the bark is used in commercial cosmetic preparations as an antioxidant and skin protector.
The leaves of this plant are also used and used as a base for drinks.