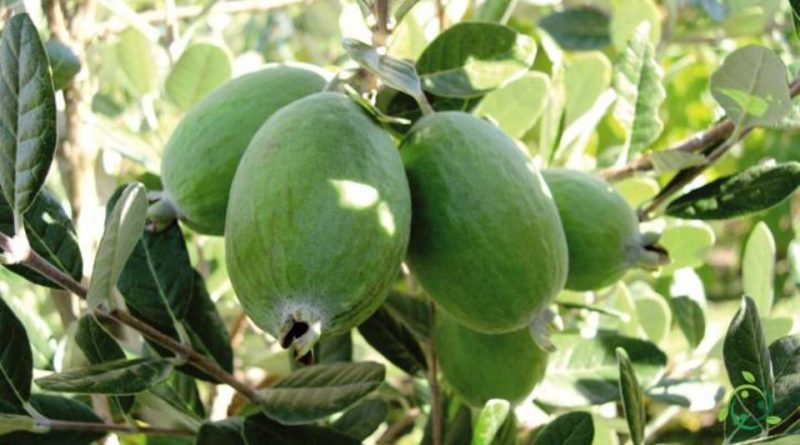 Feijoa (Acca sellowiana (O. Berg) Burret), also known by the Spanish name of Brazilian guayabo, is an evergreen shrub belonging to the Mirtaceae family. This plant is widely grown as a garden plant and as a fruit tree.
The Feijoa is able to reach a height of 4 m and a width of about 4 m (although in the area of ​​origin the plants even reach 8 m.); it has a wide crown and elliptical leaves, of an intense shade ranging from gray to green, they are also opposite and have a leathery texture.
The fruits are large berries, green in color and up to about 6 cm in length, with a good scent and particularly tasty.
Remember that Feijoa is an evergreen plant with very showy and edible hermaphrodite flowers. Pollination is crossed, although self-fertile varieties exist. In the areas of origin, the flowers are pollinated by fly-birds of the genus Thamnophilus and some aphids.
In Italy, on the other hand, pollination is partly entomophilous (dipterans) and also anemophilous. The vegetation of the year begins around March; after about 2 months the first flowers appear and flowering can last from one to two months. The life of a plant can also exceed 70 years.
The Feijoa finds its best cultivation habitat in the same area as the olive tree. It can’t stand low temperatures (lethal 7 °C below zero). It adapts well to both compact soils, without water stagnation, and loose ones.

Propagation –
Feijoa is a plant whose multiplication takes place mainly by layering, to be carried out during the month of May.
With this method young plants are obtained with identical characteristics to the mother plant from which they come, which is why it is preferable to multiplication by seed.
Among the agamic cultivation techniques we also remember the cutting, to be taken during the beginning of spring, or by seed.
Reproduction by seed has the disadvantage of obtaining daughter plants with genetic variability due to fertilization but can be used to select plants which are believed to have particular characteristics.
In any case, the plants, obtained from seed, are grafted with the desired variety or varieties such as: Apollo, Coolidge, Gemini, Mammoth, Triumph, all of New Zealand origin).
The use of different rootstocks (eg Myrtus communis) has not given good results.