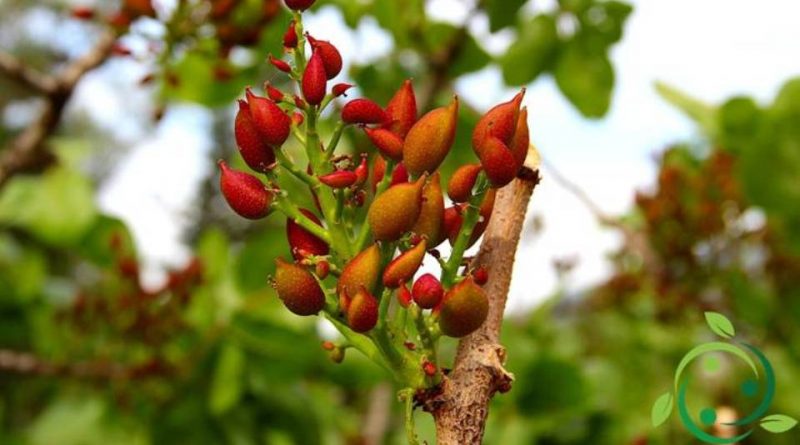 Pistachio (Pistacia vera – L.) is a fruit tree of the Anacardiaceae family whose fruit is a drupe with an oval endocarp with a thin and hard shell, containing the seed, commonly called “pistachio” which has a bright green color under a purple peel.
Pistachio is a deciduous plant native to the Middle East. It is a tree that has been cultivated since ancient times in Egypt, Greece and Rome. In Italy it is grown almost exclusively in Sicily.
Pistachio is a dioecious plant and has unisexual flowers for which there are plants with only male flowers and plants with only female flowers (which produce the fruits). The flowers are petal and collected in buds.
For a good pistachio plant remember that one male tree can produce enough pollen to fertilize up to 10 female plants. Flowering occurs in April and the fruit is harvested in September-October.
The optimal climate for pistachio cultivation is temperate and dry, even with a long and hot summer. At the same time it requires winters with a minimum of 800 hours of cold, below 7 ° C, to leave the latency phase.
This plant grows on a large number of soils, even poor ones, although in the rich and deep ones, production can double.

It is also a species that benefits in calcareous soils for good fruit quality.
As for the multiplication, the pistachio is multiplied by means of seedlings grafted on Pistacia terebinthus, and planted in a sixth of 6 x 7 m, or even wider (in some cases it reaches 10 x 10).
It should be emphasized, however, that rootstock significantly affects the productivity and vigor of the plant. Pistachio, as a rule, is multiplied by grafting to vegetative bud both on spontaneous terebinth, originating the “natural” plants, and on pistachio and terebinth seedlings and on rooted terebinth suckers, originating artificial plants. If grafted on terebinth it is able to vegetate even in shallow or rocky soils.
Another form of graft adopted is the ring or “flute” one. In this case the graft is taken from a variety that is to be propagated by operating in the chosen scion two parallel circular incisions, at a distance of 2-3 cm, thus obtaining a ring of bark, which must contain a bud, which can be removed smoothly from the scion. The ring will then be placed on the rootstock (on the portion with the same diameter) in which an identical sector of bark has been removed. The ring is then secured with raffia above and below, leaving the gem well uncovered and placing mastic at the end of the rootstock to prevent water infiltration. For a more detailed explanation of this technique, see the following sheet.
It is also remembered that in the first year, the grafted seedling is pruned at the height at which you want to develop the crown, formed by the main, secondary and tertiary branches.
As for the pistachio cultivars, these are not many and there is also a great variety of populations.
However, the most common pistachio varieties are: Bianca or Napoletana (the most widespread), Cerasola or Femminella, Cappuccia, Insolia, Agostina and Natalora. The first two are grown a little everywhere, the others are prevalently local.