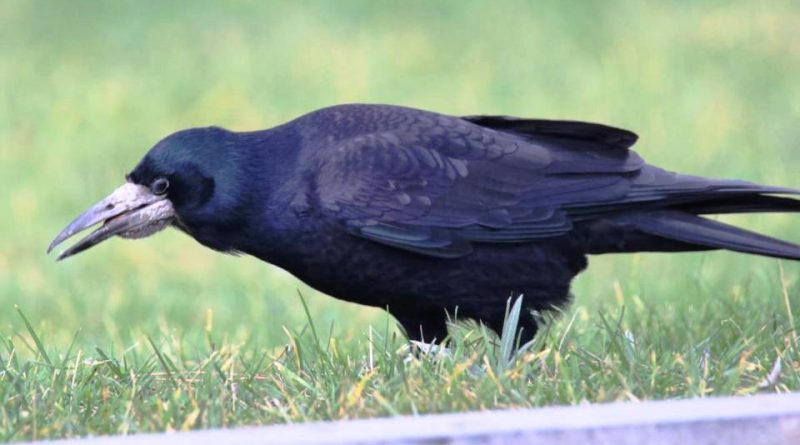 The Rook (Corvus frugilegus Linnaeus, 1758) is a bird belonging to the Corvidae family.

Systematics –
From the systematic point of view it belongs to the Eukaryota Domain, Animalia Kingdom, Subarign Eumetazoa, Superphylum Deuterostomia, Phylum Chordata, Subphylum Vertebrata, Infraphylum Gnathostomata, Superclass Tetrapoda, Classe Aves, Subclass Neornithes, Superorder Neognamigliaesiform, Suborder Corfineform, Suborder Corfine Corvoidea, Corvidae Family and therefore to the Corvus Genus and to the C. frugilegus Species.
Two subspecies of this species are recognized:
– Corvus frugilegus frugilegus Linnaeus, 1758 – which is the nominal subspecies and is widespread in the vast majority of the range occupied by the species;
– Corvus frugilegus pastinator Gould, 1845 – widespread in the eastern portion of the range occupied by the species, east of central Siberia;

Geographic Distribution and Habitat –
Corvus frugilegus is present as a breeder in central Europe, from Scandinavia to the Pyrenees. The northern populations migrate south to the Mediterranean basin.
On a planetary level this species occupies a vast Palearctic range that includes a large part of boreal Eurasia, extending from the British Isles to the Russian Far East, through most of central Europe, the south of the Scandinavian peninsula, the Balkan peninsula, Europe. eastern, the slopes of the Caucasus, Turkestan, Siberia east to Yakutsk, and south through Manchuria and north-east China to north Zhejiang. In addition, groups of specimens go in spring as far as the Faroe Islands and Iceland, moving away from them in the SE direction towards September to escape the rigors of winter.
The Rook was then successfully introduced in New Zealand in the period 1862-1874, where it naturalized and is common especially in the south of the North Island and in the Canterbury region.
In Italy, the black crow is a winter visitor in the Po Valley and is in transit in October-November and in March and spends the winter period.
As far as its movements are concerned, the species is resident in most of its range: above all the northern populations, however, are able to carry out migrations even of a certain entity (but always under 1000-3000 km, with the Asian ones being more mobile compared to the European ones), pushing along the coastal areas of Norway, in the Iberian peninsula, along the coasts of the Mediterranean, in the Middle East, Afghanistan, Kashmir, Korea and southern Japan.
Migration usually takes place along the NW-SE in Europe and NE-SW in Asia: populations spread in the urban environment, where the cold winters are mitigated, may not make seasonal movements.
These birds migrate grouped in large flocks, which are not very cohesive, and soon break up into solitary groups. Older specimens begin to return in early February, and by the first week of March most have left. During the migrations the crows manage to fly even the adverse climatic conditions, as in the case of strong thunderstorms.
As far as its natural habitat is concerned, this is represented by woods and scrubs in the vicinity of vast open areas or cultivated areas, meadows or pastures with patches of trees, open and flat areas, possibly near permanent freshwater sources.
Furthermore, the black crow is not afraid of humans and settles without problems in suburban areas and suburbs. 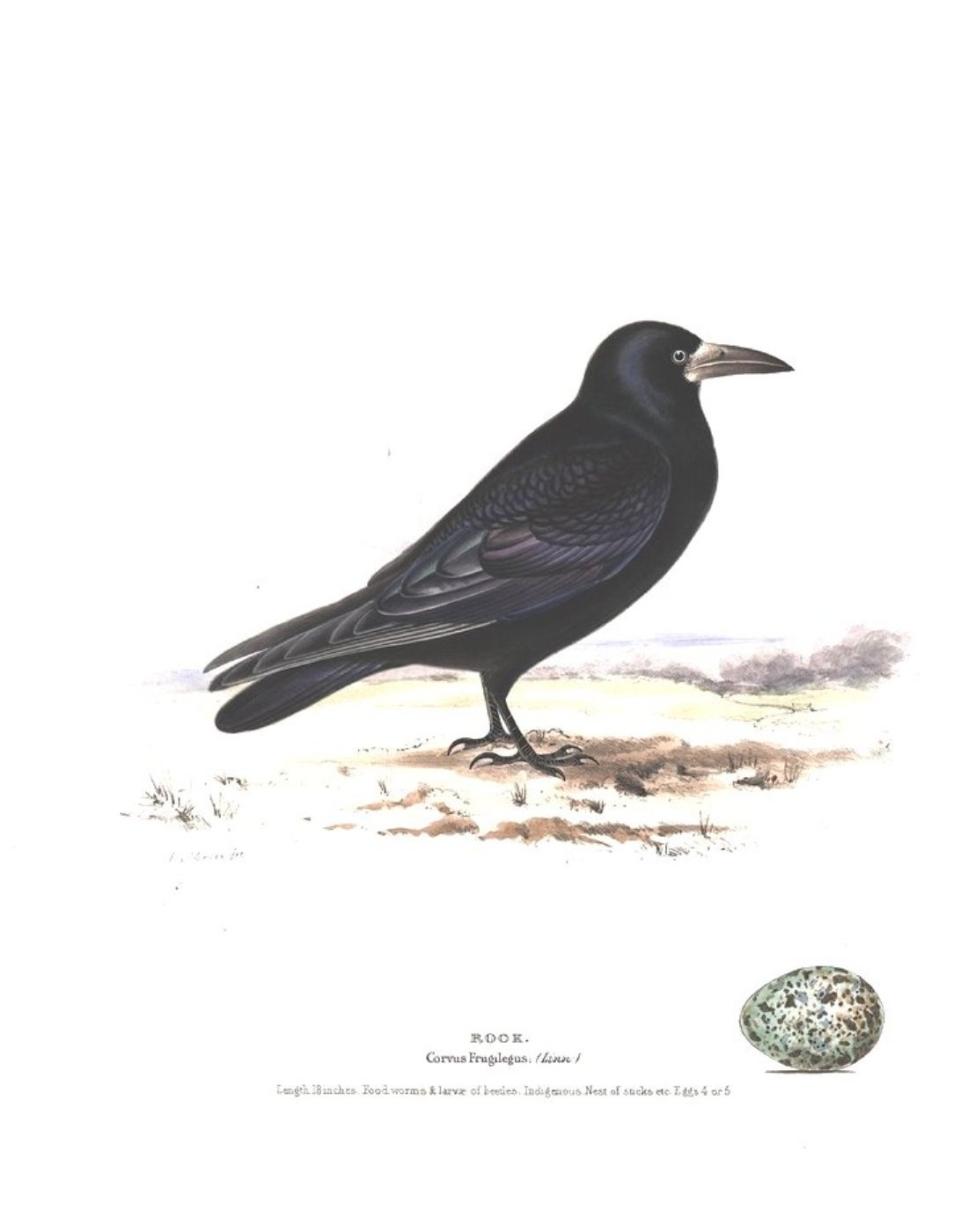 Description –
Corvus frugilegus is a bird with a length of 44-47 cm, with a weight of 320 – 570 g and a wingspan of 81-99 cm. it should be emphasized that the specimens of the pastinator subspecies are on average smaller and lighter than those of the nominal subspecies. The two sexes are indistinguishable and the young take on the appearance of old birds at the age of eight.
In general, they are birds with a robust and slender appearance, equipped with a rounded head with a long, straight and pointed beak, a robust neck, long fingered wings, strong legs and a wedge-shaped tail of medium length. Overall, the black crow has the typical appearance of ravens, such as the largest raven and the similar black crow, from which it is immediately distinguishable (especially adults, while in the young this feature is not yet developed) for the face naked, as well as for the smaller and more rounded head, the thinner beak, the wings in proportion longer and the presence of less dense feathers also in the feathered area of ​​the legs.
It has a completely black plumage, with the presence of metallic reflections of a purple or green color, very evident when the animal is in direct sunlight.
The beak is black in the distal two-thirds, while the base, as well as the area of ​​bare skin that extends to the eyes (which are dark brown, with a hairless periocular ring, but blackish in color) it is scaly and grayish-white in color.
As for the call, the crow has numerous and related to social life and has a number of sound expressions that are difficult to distinguish from those of the black crow.
The most frequent sound is a Kah or Krah which can be of varying length and which is often introduced in a bow by greeting each other. In aggressive situations this sound is higher and longer: krääääh. Furthermore, in particular in spring, a subdued and garrulous chatter is introduced between the longer croaking sounds. Young birds and nest birds also scream very loudly and squeak audibly. A piercing Rrrah is then heard.
As far as movements are concerned, on the ground it moves hopping in small flights, in the air it prefers soaring flight, made up of long glides; it is frequently seen, especially in spring, performing somersaults and aerial acrobatics.

Biology –
The Rook’s sexual maturity is towards the end of the second year of age, when it begins to form stable and monogamous bonds.
The mating phase is preceded by courtship. During this phase you can observe behaviors such as the care of the partner’s plumage, the care of the nest or “ballets” typical of courtship between partners, during which both have to worry about each other. The roles of male and female are strengthened during the ritual, with frequent role exchanges between the sexes, at least at the beginning of the courtship.
Once coupled, the construction of the nest begins which runs from the beginning of March and the place of construction may be the bifurcation of two branches of a city or country tree. The nests are built in the vicinity of each other, with distances between nest and nest sometimes less than a meter.
Furthermore, nests can be built on buildings, bridges or, more rarely, on the ground. The construction of the nest is entrusted to both sexes and consists of a compact construction, made by intertwining thin and flexible branches, held together by different materials. The theft of material within the colony, as well as between different colonies, is common.
At the end of this phase the female lays from three to six, sometimes up to nine, brown-gray eggs, which will be hatched only by the female, who during this period is fed by the male, for 16 – 20 days; Occasionally, behaviors such as hatching parasitism are observed, even if it is not yet clear whether parasitism also occurs towards one’s nest.
The care of the young takes about a month; the first ten days, only the male takes care of the diet of the offspring, later they will be fed by both parents. Before reaching self-sufficiency, young specimens will be cared for by their parents for a time before joining young colonies.
Younger specimens will find future partners in these flocks, usually within a year, and then choose a breeding place. Many, on the other hand, find only hatching places for one, two, or in exceptional cases, three years.

Ecological Role –
The Rook is a bird with a very varied diet, similar to all corvids.
This feeds on both plant and animal substances.
Specifically, it feeds on earthworms, various dipters, beetles and their larval stage, particularly the beetle larva and related species and some varieties of snail, are among its favorite preys. The raven preys are also small mammals, such as, for example, the shrew, the common mouse and the water mouse; occasionally, even if rarely, birds and the contents of their nests are also its prey. In the winter months, the raven also feeds on carrion, mostly on carrion from other corvids.
The vegetable diet includes seeds of various types, including wheat and cereals; the nutritional intake of nuts and acorns, and of fruits such as cherries, plums and berries are also important. The diet of younger individuals is mainly, but not completely, composed of animals. Crows also feed on corn and sunflower seeds, which they take directly from the plant. The preys are not chased except for short distances.
The start of the search for food takes place between about an hour before sunrise, until eight in the evening, during the winter period.
Rook are social animals, and sometimes gather in large flocks to spend the night in the trees. They have developed a number of social behaviors. Frequently, aerial games are observed between members of the same flock, such as dropping an object and catching it in mid-air or swinging a branch. The behavioral structures between partners and other members of the colony are manifold and differentiated. Partners generally greet each other with an air parade.
Like other corvids, the common raven exhibits extremely curious behavior. Many birds kept in captivity exhibit behaviors that can be described as learning how to use tools. Crows that live free in nature never show such behaviors, which are therefore considered learned.
According to the IUCN, the conservation of the species knows positive or negative periods, in relation to direct human interventions. Through the care of the territory the foundations are laid for the proliferation of the species; through the reckless exploitation of natural resources, their survival is endangered. The species has gone through negative periods thanks to the intervention of man, who reduces the number of nesting places by cutting down the trees, thus weakening the species at a territorial level. It would appear that the common raven has suffered from damage done to the environment, although irrefutable scientific evidence has not been provided. For the first time in recent years the common raven was bird of the year, in 1986, which led to an awareness, which has favorably affected the raven population. Overall, there was a slight spread of the species towards the west. An example is the resettlement in the 1960s in Switzerland. The situation, in areas that had so far shown a situation at risk, such as eastern Austria, tends to stabilize. In Europe the species is not endangered, so much so that it is classified with “S” (safe), while in Austria, Switzerland and the Czech Republic it is on the list of endangered species. Thanks to the breeding strategy by colonies, the number of specimens has increased dramatically, to the point that, for example in Baden-Württemberg, measures have been taken to limit the species. Overall, the European population amounts to over 10 million couples capable of reproducing.