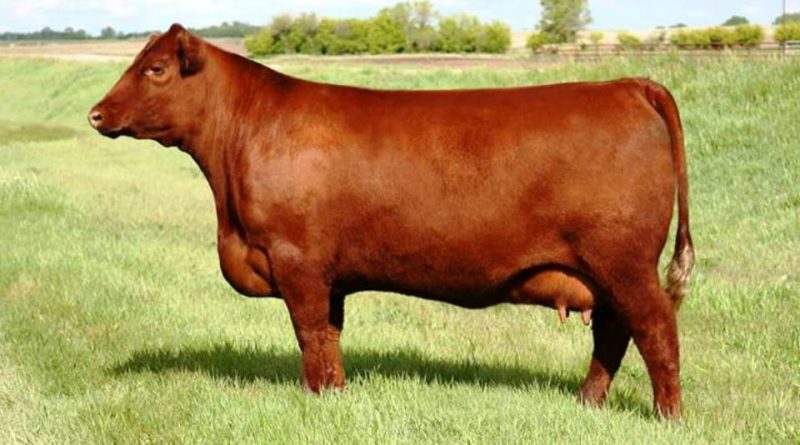 The Red Angus is a breed obtained, in the United States, from the selection of Angus subjects of red color with a productive attitude for the production of meat.

Geographical and Area Distribution –
The Red Angus, as mentioned, is a selected breed and present in the United States and also present in Canada and Australia.

Origins and History –
The Red Angus was born following a selection made by individuals with the red coat of the Scottish Angus breed, which is usually black, but which can also generate the presence of individuals with a red coat.
The presence of red individuals in the Scottish Angus probably originates from the cross breeding, which operated in the eighteenth century, of small Scottish cattle with the largest English Longhorn strain, with the aim of increasing their performance.
In the United States, cattle with a red coat until 1917 could be registered in the American Angus Association herd book.
From around 1945, some herds formed only of red stumps. So it was that in 1954 a breeders’ association founded the Red Angus Association of America following a meeting in Fort Worth, Texas.
In 2008 the registered population was about 47,000 animals, making it the fifth largest cattle breed in the United States, after American Angus, Charolais, Hereford and Simmental.
Also in Australia, cattle breeders with red coats of this breed had asked for the possibility of registering their herds with the Angus Society of Australia; following this denial, in 1970 they formed the Red Angus Society of Australia.

Morphology –
Red Angus is recognized for having a deep red coat.
It is also an acorna breed with a flesh-colored red muzzle.
These are animals that reach a weight of 900 kg for males and 635 kg for females.

Productive attitude –
Red Angus is a bovine breed bred only for the purpose of producing meat.
Comparative studies have not identified any commercially significant difference between this breed and the American Angus.
Bulls of this breed have been used to give rise to crossbreeds. the Red Angus is a mother breed of the Regus breed (cross breeding with Hereford) and of the RX3 (a cross with the presence of Hereford, Red Angus and Red Holstein).
The Red angus is a breed highly appreciated for its fertility and longevity to which it adds an excellent maternal capacity.