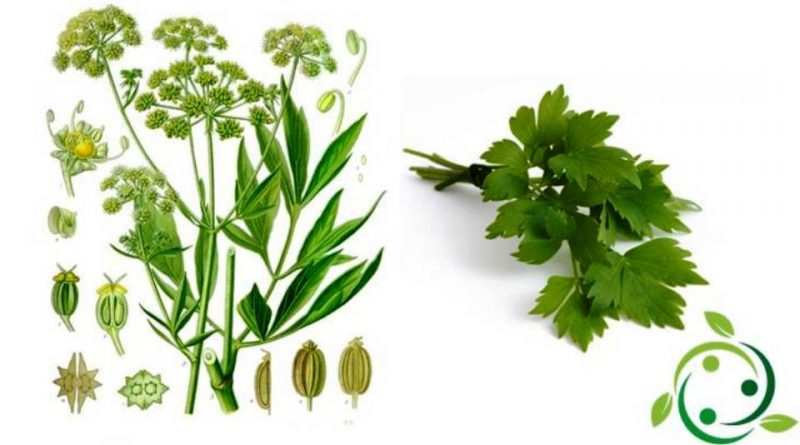 Origins and History –
Levistic is a perennial herbaceous plant belonging to the Apiaceae family, originally from the eastern Mediterranean, in particular from Iran, from where it then spread to Italy, especially in the Alpine and Apennine areas and grows both spontaneously and within cultivated vegetable gardens.
The lovage takes its name from the Latin “levare”, meaning to remove, with reference to its soothing properties. Lovage is also known as mountain celery or love parsley. This last denomination is due because in folk medicine, it was seen as a powerful aphrodisiac. In fact, it was part of the ingredients of love drinks. It was also used as a lucky charm for young brides, included in their hairstyles and for newborns, added to the first bath of the little ones.
Lovage was widely used in the cuisine of ancient Rome. It is in fact present in many of Apicius’s recipes, for example in De re coquinaria.
Already the Romans, as a hecto, used it widely in the kitchen and it was an ingredient of the ‘garum’, the sauce made from the interior and salted fish used to season first and second courses.
It was also highly appreciated by the Benedictine monks who, in the Middle Ages, spread it in the gardens and courtyards, especially in northern Europe where it is still widely used today.
So since the Middle Ages it was used to calm pain, as a diuretic and disinfectant.
Furthermore, given the numerous properties and benefits of lovage, although it is not a very common plant, it is widely used in herbal medicine and also in the kitchen.
Its use obviously changes from country to country. So, for example, the Czech Republic and Spain consider it only as a component of the products in which it is combined with other aromatic herbs such as Peppermint, the licorice root and used mainly to reduce gastric disorders. While in Germany and Poland the whole plant is traditionally used both as a decoction and in the kitchen.

Description –
Lovage is a perennial herbaceous plant whose erect stem can grow up to a height of 2 meters. The leaves, in appearance and flavor reminiscent of celery.

Active principles –
The main characteristic of Levistic is certainly to be attributed to the presence of phytochemical compounds. These are molecules naturally present in plants with both organoleptic activities, such as color, smell, flavor and biological. Among the substances present in mountain celery we find eugenol with disinfectant, local anesthetic and anti-inflammatory properties and carvacrol responsible for the characteristic odor of the plant. Note also the presence of coumarins, in particular umbelliferone with demonstrated hypotensive activities, also used in the therapy of dysmenorrhea.
Lovage is particularly rich in essential oils, more concentrated in the seeds. A total of 190 different molecules have been identified so far. Its nutritional composition has been little studied so far. However, some bromatological studies on aromatic herbs have highlighted the following composition.
The nutritional values ​​per 100g of lovage are:
– Essential oils 2%;
– Protein 18.54 gr;
– Fibers 4.45 gr;
– Magnesium 6.76 gr;
– Calcium 104.1 mg;
– Potassium 142 mg;
– Sodium 3.9 mg;
– Iron 0.25 mg;
– Copper 0.14 mg;
– Magnanese 0.65 mg;
– Zinc 4.12 mg.
The levisitic also has antioxidant activity, thanks to its high content in phenolic compounds.

Properties and Uses –
The Levistico is a plant highly valued in the kitchen for the flavor it gives to the dishes, similar to the broth nut, we can often find it among the ingredients of the various flavorings on the market.
In addition to its uses in the kitchen, lovage has a number of interesting benefits for those who consume it.
Let’s see in detail all the benefits of Levistic:
– Hepatoprotector; it is rich in phenolic compounds with strong antioxidant activities that promote liver protection, as shown by a rather recent study in which the levisitic extract, administered to rats intoxicated by a herbicide, has protected the liver from oxidative stress and the consequent destruction of liver cells.
– Antimicrobial and antifungal, disinfectant and antiseptic. Some studies have confirmed the antibacterial and antifungal properties of lovage. In particular, it has been shown that the extract of the root and seeds of the plant is capable of destroying the cells of pathogenic microorganisms such as E. faecalis, S. aureus, Escherichia coli, Candida albicans, S. cerevisiae.
– Levistic in slimming; the root extract of the lovage would seem useful in the inhibition of over 50% of the pancreatic lipases (LP), the enzymes responsible for the digestion of fats, inducing a lower absorption of the latter. This activity would help in the loss of body weight, however it is necessary to be careful not to fall into the error of considering lovage as a slimming substance but, at most, only as a possible support in the dietary path, accompanied by physical activity and balanced nutrition.
– Anticancerogen; lovage is the source of important doses of Quercitina, belonging to the flavonoid family. This substance is known for its ability to block certain enzymes, responsible for the growth of cancer cells (ornithine decarboxylase, phosphoinositide kinase). The antitumor property of Quercitina has been widely studied in different types of cancer, however, to date there are still no studies that would confirm this activity directly in the Levistic.
– Antiasthmatic; the Quercitin contained in the lovage blocks the production of leukotrienes, molecules responsible for inflammation in asthma with consequent improvement in breathing.
– Antioxidant; the antioxidant property of lovage is given by the high content of flavonoids, such as the already named Quercitina or Kampferol and the modest content of vitamin C, which acts as a reducing agent capable of neutralizing reactive oxygen species.
– Antihypertensive, mild anticoagulant, diuretic; several authors report the presence of aromatic compounds called Cumarine, in the root of the lovage. However, these are mainly non-hydrolyzed coumarins (such as Umbelliferone or Furinocumarone) with a mild anticoagulant power since, these molecules are in fact inactivated, from this point of view, by digestion. The same molecules, however, help to reduce blood pressure as diuretics and the Italian pharmacopoeia recommends the use of lovage as a support in the treatment of renella (kidney stones).
Ultimately, the main properties of Levistic are: diuretic, anti-edemic, antirheumatic, deodorant, antiseptic, carminative, tonic and digestive.
Among the numerous properties and benefits there is also that of cleansing and perfuming the skin, which is why it is used for cleansing baths and as a deodorant. Just add a handful of leaves, seeds and flowers to the tub water.
Like all plants used in natural medicine, even lovage is not without contraindications and requires attention in the presence of certain pathologies. Being diuretic, it promotes hypotension which could increase the action of hypotensive drugs. Even if there are no particular drug interactions, we advise you to consult your doctor or pharmacist before using it concomitantly with drugs. Not recommended even in case of renal failure and inflammation of the renal parenchyma with edema (swelling). For pregnant women it is recommended to limit the use of Levisitco only as an aromatic herb in the kitchen as its properties of stimulating menstruation are known. Finally, prolonged exposure to the sun while using levisitic extracts is not recommended. This is because, being rich in furanocumarine (photosensitizing molecules), it increases the risk of sunburn and skin reactions in the sun.

Preparations –
The Levistico collect the leaves to be used fresh in risotto, broths, meats, stews, chicken, cod; the mature seed of this plant is used in liqueurs, salads, mashed; it has a flavor close to celery, but with a much more intense, more pungent aroma which makes it very pleasant. Lovage is used as a substitute for an Indian spice, Ajowan, being the first most common in Europe.
Conferring the characteristic flavor reminiscent of celery and, as previously mentioned, also the broth nut, it adapts perfectly to all dishes.
In addition to the leaves, the chopped stem also adapts to salad dressing. The grated or dried and sprinkled root is also an excellent seasoning while the ground seeds give a unique flavor to bread and baked goods. The flavored oil is interesting, leaving the lovage seeds (slightly crushed) for 24 hours in a container with extra virgin olive oil. Subsequently it can be filtered or consumed as such, also eating the seeds.
For therapeutic purposes, the infusion is indicated for rheumatism and can be applied to wounds as an antiseptic, or drunk to stimulate digestion.