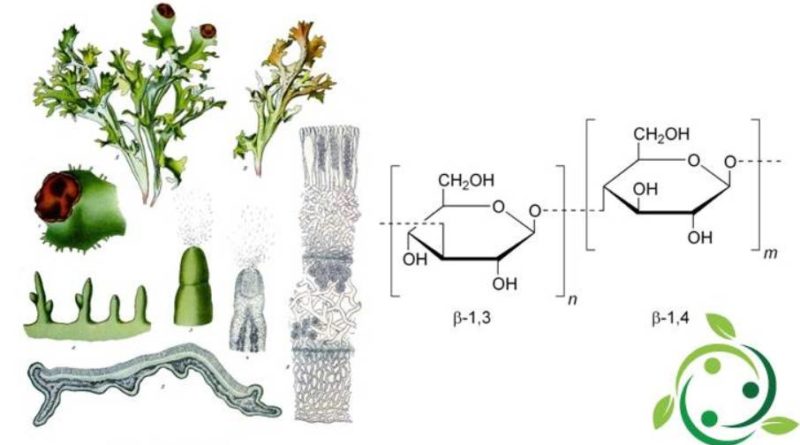 Lichenin, also called lichen starch, is a polysaccharide contained in various types of lichen, including Icelandic lichen (Cetraria islandica (L.) Ach.), In which it is found either as a reserve substance or as a constituent of the walls cell; by total hydrolysis it turns into glycose and, by partial hydrolysis, into cellobiose.
Lichenine which has a brute or molecular formula: (C6H10O5) x is therefore similar to cellulose; it dissolves in boiling water and diluted acids forming colloidal solutions.
Chemically, lichenin, which was studied since 1957, is a mixed-bond glucan, consisting of repeated glucose units linked by β-1,3 and β-1,4 glycosidic bonds.

It is also an important carbohydrate for reindeer and squirrels that feed on a lichen in their habitat (Bryoria fremontii (Tuck.) Broth & D. Hawksw.).
Lichenin can be obtained by extraction from Icelandic lichen, in a cold diluted solution of sodium carbonate for some time, and subsequent boiling.
Through this process the lichenin is dissolved and, on cooling, separates in the form of a colorless gelatin.