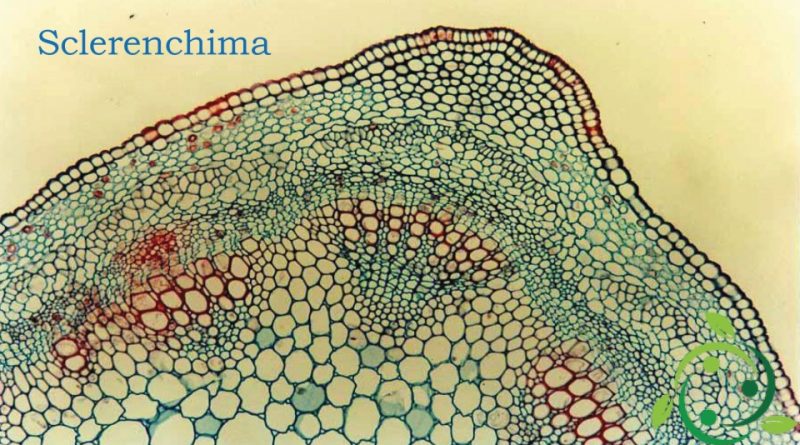 By the term sclerenchyma, in botany, we mean a plant tissue formed by cells that normally died at maturity and have a thickened and usually lignified cell wall and therefore no longer plastic.
Sclerenchyma, together with collenchyma, is therefore a mechanical adult tissue, present exclusively in spermatophytes and no longer subject to growth by distension.
In sclerenchyma the strong thickening of the secondary wall causes the wall to grow until it almost completely occupies the cellular lumen.
Subsequently, due to the reduction of the lumen and the interruption of intercellular exchanges, the sclerenchymatic cell, having reached maturity, dies. The highly lignified cell walls occupy almost the entire cell volume. Branched layers and channels that pass through them are visible. The protoplast is completely reabsorbed.
The sclerenchymatic cells are present in the integument of some seeds and in portions of different fruits (such as, for example, in the petrous cells of pear and quince pulp, in the shell of coconuts and endocarp of many drupes such as those of cherry, apricot, fishing, etc.).

The function of the sclerenchymatic tissue is to strengthen and stiffen the organs that have finished their growth.
In the sclerenchyma, based on their shape it is possible to distinguish:
– sclereids; these are cells not elongated in a main direction, of different shape (isodiametric, ramified) placed isolated or in small groups inside parenchymatous tissues.
– the fibers; which are elongated and pointed cells at the ends. During their ontogenesis, while the deposition of the secondary wall takes place, the fiber cells continue to grow at the apexes (apical growth), entering between underlying and overlying adult tissues. This mode of growth, which explains the considerable lengths of these cells, is called “intrusive”. Inside the fibers we can distinguish:
– Xylar fibers; these are the fibrous elements typical of wood, derived from tracheids after thickening of the walls and reduction of areolate punctuation;
– Extraxylar fibers: often grouped in bundles to also form sheaths around organs in every part of the plant outside the wood (bast fibers, cortical, pericyclic).