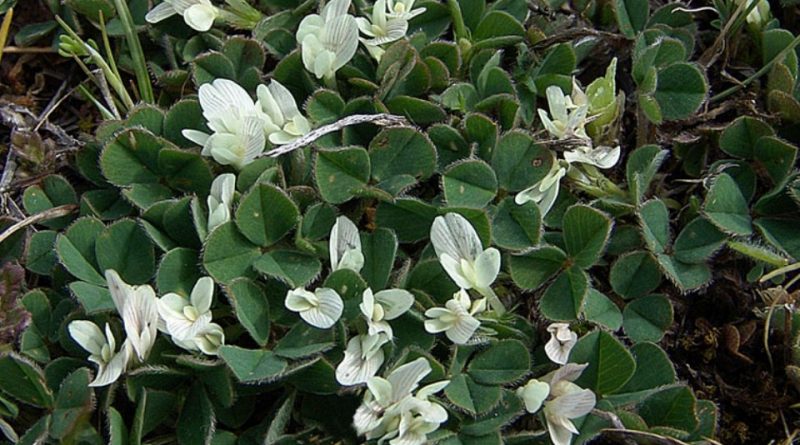 The Subterranean clover (Trifolium subterraneum L.) is a herbaceous species belonging to the Fabaceae family.

Etymology –
The term Trifolium comes from the Latin “tri” = three and “folium” = leaf, refers to the ternate leaves. The specific epithet subterraneum derives from the Latin terms “sub” = under and “terraneus” = earth = below ground; in reference to the particularity of the fruits that penetrate the surface of the ground.

Geographical Distribution and Habitat –
The Subterranean clover is a plant native to the Mediterranean basin and the coastal areas of western Europe, where it goes as far as England, it is widespread, as a component of natural pastures, over more than 17.5 million hectares. It is also present in southern Australia, where it was accidentally introduced in the nineteenth century, and here the underground clover has taken the maximum spread, affecting about 20 million hectares.
Its habitat is in natural pastures, on acid and loose soils in temperate climate regions with rainy winters and hot and dry summers; from the plain up to 1200 m. 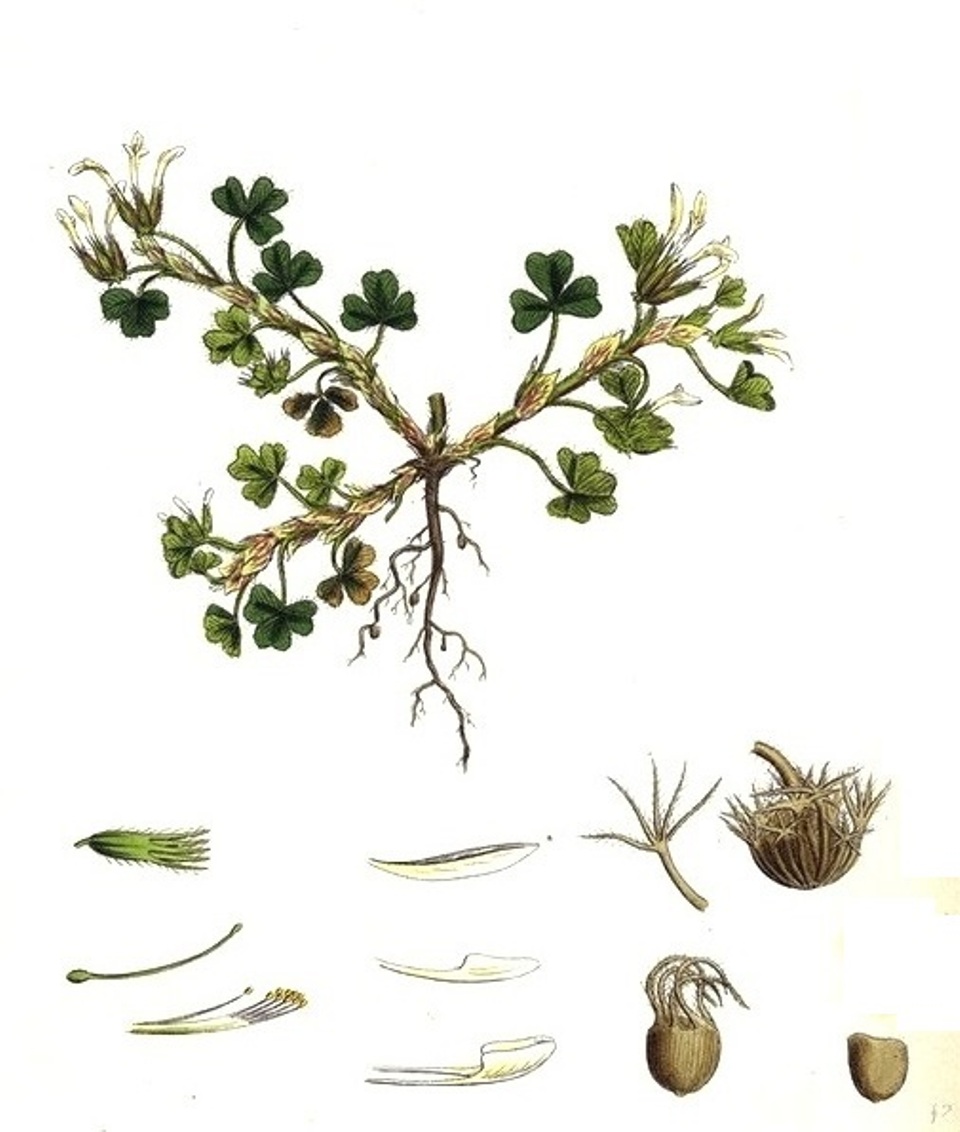 Description –
Trifolium subterraneum is a plant of low size as it can reach a maximum height of 30 centimeters.
It has trifoliate leaves with characteristic spots. The stems are equipped with down and creeping. The flower heads bear 2 or 3 white flowers that have the salient feature of curving towards the ground after pollination, until they are immersed in the ground, where they leave the seeds. the anthesis is between April and June
The fruits are lenticular legumes, glabrous, monosperms with seeds are brown-lilac.

Cultivation –
The Subterranean clover is a species which, to be grown, must find minimum temperatures in the coldest month above 1 ° C. it is a species that prefers acid soils. For its cultivation the plant must be done in autumn after a shallow processing of the soil.
Like all other clovers, this plant is able to get nitrogen from the atmosphere, so nitrogen fertility in the soil counts for little, but it is very important that the typical bacteria of symbiosis are present in the soil. It even seems that the Subterranean clover is able to fix about 150 kg of nitrogen per hectare per year. If the bacteria suitable for nitrogen fixing are not present, they must be inoculated.
The sowing density is between 25 and 35 kg of seed per hectare, with a broad spread.

Uses and Traditions –
The Subterranean clover is an autogamic, leguminous, autumn-spring cycle.
The main use of this plant is grazing, continuous and very intense, especially with sheep. Very severe grazing improves all plant responses: leaf area index, flower production, seed production increases. Grazing must begin 4 weeks after settlement and lasts until summer. Eventually this species can be associated with annual herbs for the hot station, or shrubs, which when grown when the clover is not present allow the use of the pasture all year round. In this regard it should be noted that, due to the abundant production of the typical seed of the underground clover, the seed often goes to enter the diet of the animals that graze on it, with a non-negligible supply of nutrients to the diet of the animals. Other interesting uses of Subterranean clover are:
– Coverage of the ground in arboretums and vineyards: the clover, developing when the tree species are at rest, does not enter into competition for nutrients or water with other crops, and allows grazing in these areas in periods when they do not they would be exploited, improving land use.
– Coverage of the ground among specialized herbaceous crops: for example inserted in the maize-sunflower cycle: the clover, with very little care, will provide to maintain high fertility of the soil through nitrogen fixing.
– Grassing of firebreak lines in the woods: these sloping lands are subject to erosion, especially in the winter months that have the greatest rainfall: the clover covers the ground and reduces these risks. In addition, the animals grazing on these lands destroy the shrubs and twigs that can cause fires.
This plant thanks to its congenial cycle to Mediterranean climates, to its persistence in culture due to the phenomenon of autisemina, to its adaptability to poor soils (which among other things enriches with nitrogen) and to continuous and severe grazing plays an important role in many South-European regions, not only as a fundamental resource for pasture-grazing systems, but also for unconventional uses, for example in multi-purpose systems in wine-growing or forest areas.
In Italy Subterranean clover, like other self-seeding legumes, is still undeservedly underestimated. Its cultivation area (excluding the densities) is estimated at just 15,000 ha, 80% of which are located in Sardinia and the remainder in central and southern Italy, from Tuscany to Sicily.

Preparation Mode –
Trifolium subterraneum is a species of great interest for the feeding of livestock and for the agroecology techniques of pastures; it has no particular use in human nutrition or in the pharmaceutical field.