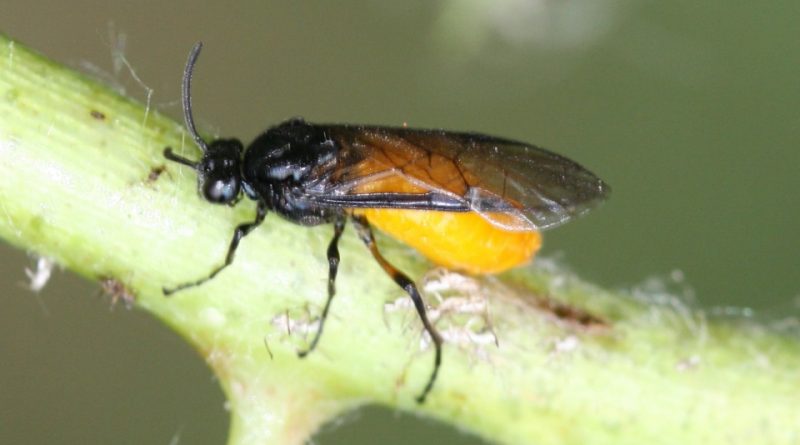 The Arge pagana (Arge pagana (Panzer, 1798)) is a hymenopteran belonging to the Argidae family.

Geographical Distribution and Habitat –
Arge Pagana is a symphite whose larvae feed mainly on leaves of the rose plant, both cultivated and wild (Rosa canina) and present in many regions of the world and in Europe.

Morphology –
Arge pagana is a hymenopter which can reach a length of about 10 mm. It is recognized by its transparent wings and black veins, often with a blue metallic sheen.
Its most evident characteristic is a large, rounded yellow abdomen, the head, the chest and the legs of black color.
The larvae, which reach about 25 mm, are glabrous, green in color, with an ocher head and with typical and numerous black tubercles, placed in longitudinal rows along the back and sides of the body; the lateral tubercles are larger in diameter.

Attitude and biological cycle –
Arge Pagana is an insect that hibernates at the pupal stage, in the ground or in the plant residues at the base of the plants; also it can winter as a mature larva. In spring, generally in the period between April and May, the flicker of the adults occurs (1st flight); these ovide-lay on the buds of roses originating the first larval generation, active at the end of spring-early summer. After this generation two more follow, especially in the warmer years, thus making three generations a year. The pupal period is very short. The adults feed on nectar and pollen from Tanacetum vulgare and Heracleum sphondylium.

Ecological Role –
The damage is determined by both larvae and adults.
The larvae are very active defoliators which cause typical total erosion of the leaf flap, starting from the margins; they are insects with gregarious behavior, therefore in case of strong infestations the damage can also be serious for the defoliation they cause. The damage caused by adults (females) is due to their typical oviposition; in fact the females, with the terebra, practice longitudinal incisions on the young branches still not lignified, in which they lay their eggs. These incisions cause a necrosis of the tissues that originate longitudinal scalariformi windows, with eggs laid in overlapping rows; each egg is placed inside a chamber, separated from the others by septa partitions of necrosed vegetable tissue.
The lesions thus determine a deformed and irregular growth of the jet or of the twig that becomes twisted; furthermore there may be an evolution of fungal cancer, within the lesions themselves.
In case of heavy infestation the necrosis extends until the attached twigs are dried.
The containment of these insects can be practiced with agronomic interventions, with the prompt elimination of the jets that show the first signs of oviposition, and possibly those with larval colonies in activity in the case of limited and localized infestations.
The chemical fight against these pests must be done and justified only in the presence of strong attacks and only in intensive cultivation; in any case the treatments must be carried out against the larvae, in the first stages, evaluating the age and the presence of the useful entomofauna.