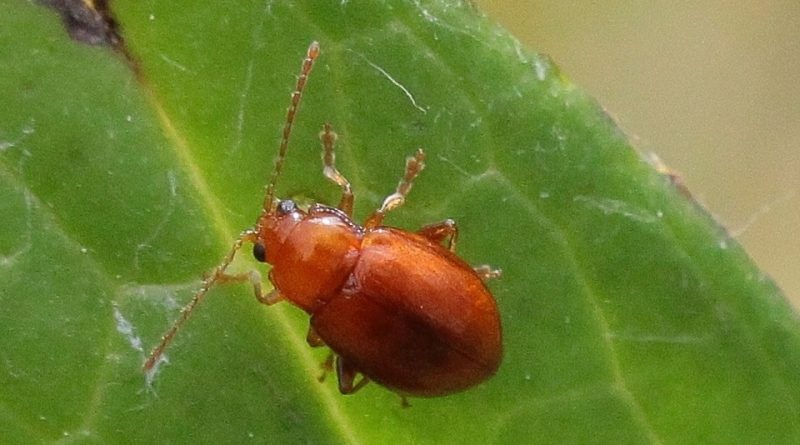 The artichoke coleoptera (Sphaeroderma testaceum (Fabricius, 1775)) is an insect belonging to the Chrysomelidae family.

Geographical Distribution and Habitat –
Sphaeroderma testaceum is a beetle found in most of Europe, North Africa and Israel, as well as in North America, in the area of ​​Atlantic Canada. This beetle populates mainly uncultivated land, woods, roadsides and other areas where it finds plants to feed on such as: Carduus, Carlina, Cirsium, Onopordum, Cynara, Common Centaurea (Centaurea nigra), Serratula and Cirsium arvense (in Canada).
In Italy, this phytophagous is widespread all over the world, especially in the central and southern regions, although it is in Sardinia that significant damage has been reported, especially on the Artichoke.

Morphology –
The artichoke coleoptera, unlike all the other Alticas, has an almost hemispherical body, with a very pronounced convexity of the back and dimensions of 2.5-3.7 mm.
The head is broad, with large eyes and threadlike antennae close between the eyes. The elytra are convex and slightly elongated and the posterior femurs are rather enlarged. The pronotum shows a rough basal formation, prominent anterior angles, a well-defined basal groove and two lateral notches. Both the elytra and the pronotum are of a light brown-bright orange color.
The larvae are yellowish in color.
Sphaeroderma testaceum can be confused with a species very similar to Sphaeroderma rubidum (Graëlls, 1853); it can however be distinguished from the previous one on the basis of a smaller size and a square elitra, but above all with a close study of the genitals.

Attitude and biological cycle –
The damage of this insect is determined by the adult generations and, the most important one, is expressed with intense erosions, more or less circular, of the leaves with erosion of the mesophyll but respecting the opposite epidermis. The larvae instead undermine the veins and the leaf parenchyma, where they dig typical serpentine galleries.
The adults of the artichoke coleoptera appear in the period of March – April, eroding the leaves in the way described, and then sheltering in the ground where they spend the summer. At the end of summer (generally in the first or second decade of September) they are reported on cultivated plants where they produce leaf erosions generally not as intense as those of spring. Subsequently they mate and ovidepite at the level of the vegetation (often on the large ribs); the larvae are born in autumn, they nourish by undermining the leaves and, when mature, which occurs in the middle of winter, they carry themselves under the ground where, at the end of winter (February – March), they learn to give birth to new adults in March – April.
This insect therefore makes a generation a year.

Ecological Role –
Both the larvae and the Sphaeroderma testaceum adults feed on the leaves of some species, in particular, as mentioned, of Carduus, Carlina, Cirsium, Onopordum, Cynara, Common Centaurea (Centaurea nigra), Serratula and Cirsium arvense. For this reason, the control of this insect, on the two cultivated species: Artichoke and Cardo, must be carried out after monitoring the population through controls and samplings, above all against the adults who, at the beginning of spring, begin to infest the cultivated fields.
The specialization factor of agricultural crops (cardoon and artichoke) becomes a complex factor of control, since the alteration and reduction of biodiversity, the lack of periodic rotations and the almost total disappearance of agricultural consociations causes phenomena and biocenoses that are difficult to control even with the use of pesticides which, we repeat, are always a worse measure than the real solutions that are of an agroecological nature (organization of productions and agronomics (use of inappropriate fertilizers, specializations, etc.).