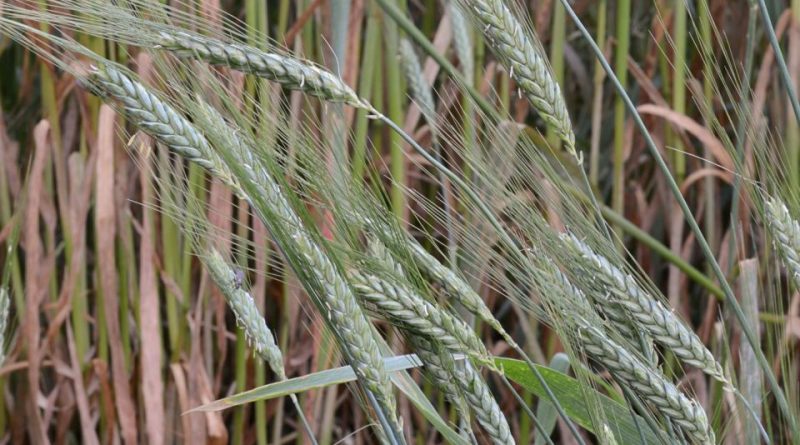 Farro dicocco, also known as emmer, medium spelled or even spelled (Triticum dicoccum L.) is a cereal belonging to the Poaceae family.

Systematic –
From the systematic point of view it belongs to the Eukaryota Domain, Kingdom Plantae, Magnoliophyta Division, Commelinidae Subdivision, Liliopsida Class, Poales Order, Poaceae Family, Triticeae Tribe and then to the Triticum Genus and to the T. dicoccum Species. Synonymous with the term Triticum dirocco.

Etymology –
The term Triticum according to Varrone derives from beaten tritum, for the use of beating wheat to separate the grains from the ears. The epithet specific dicoccum because of the spikelets that often carry two kernels.

Geographic Distribution and Habitat –
Farro dicocco is a cerale with ancient origins whose first mention can be found in the Mesopotamia of the third millennium. It descends through the process of domestication by the wild species T. dicoccoides, whose diffusion area can be placed from the east of the Mediterranean up to the Caucasus. On the basis of the fossil records of the two species it appears that the domestication of T. dicoccum was much faster than that of small spelled, most likely for the superior productivity of the first species, capable of forming two kernels for spikelet instead of the only characteristic seed of T. monococcum. Today it is grown in various parts of the world, especially in organic farming and in Italy it is the most cultivated spelled. 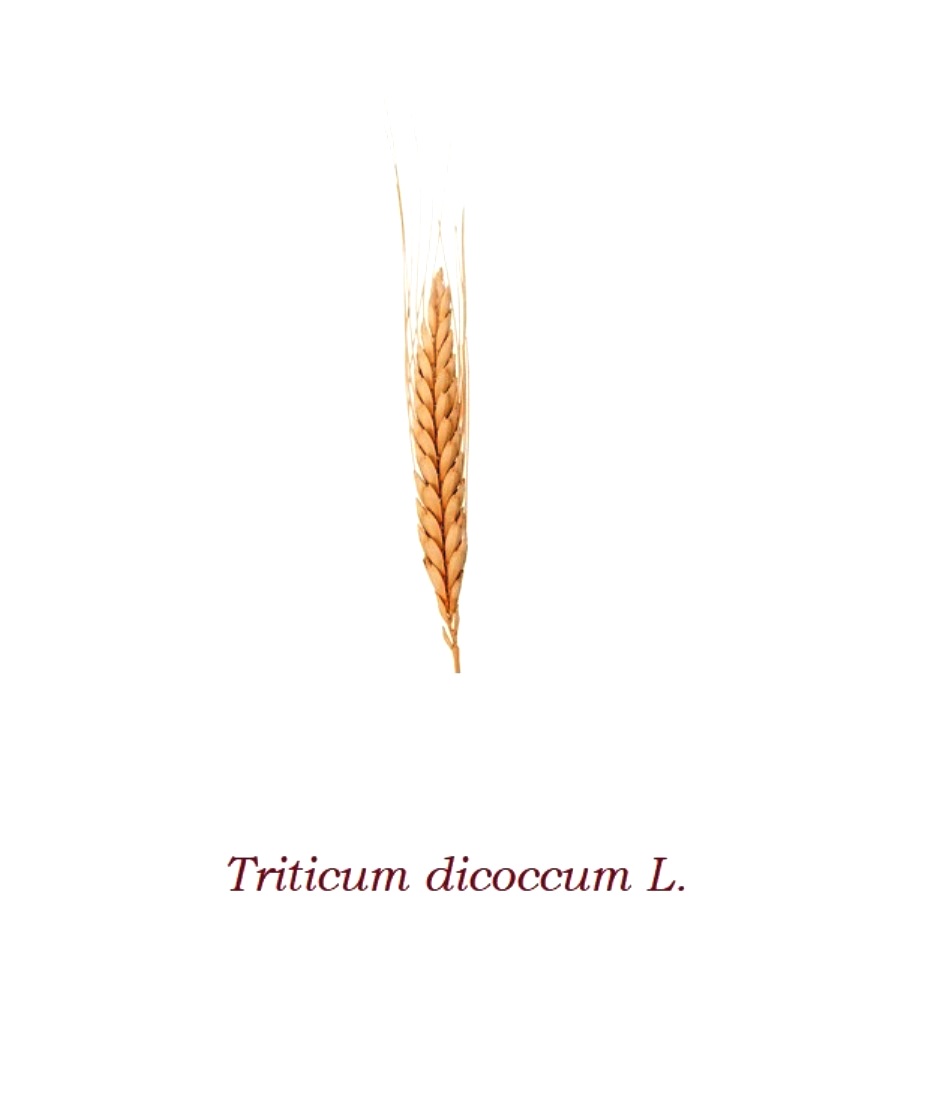 Cultivation –
Medium spelled is a species that grows even on soil poor in nutrients, in hilly areas between 300 and 1,000 m s.l.m. The sowing of this cereal occurs in autumn, on previously prepared soil, using dressed seed. Soil preparation does not use herbicides. The plant is robust and does not need chemical fertilizers or pesticides, being resistant to cold, diseases and pests. Harvesting takes place later than that of wheat and is carried out in summer with the normal machines used for grain harvesting. The peculiarity of spelled is that the seed, at the end of threshing, still retains the protective shell (glumette), so it needs a further processing phase (called “husk” or “shine”). This drawback, together with the low yield, has made it less “popular” in the time of the wheat and has actually pushed the grower to turn to more profitable crops. The yield in brightness is equal to about 60-70% of the initial product. An advantage of this cereal is that after harvest, it does not get moldy and can be stored for many years. For details of the cultivation technique see the following sheet.

Uses and Traditions –
The Triticum dicoccum is a close relative of the wheat and is one of the three species of the genus Triticum commonly called spelled and one of the first eight crops cultivated. The first mention of this cereal can be found in the ancient Mesopotamia of the third millennium (in Sumerian, ziz2), and later also in the Bible. It was known and cultivated in ancient Egypt. Ezekiel used it as one of the ingredients for his bread (Old Testament Ezekiel 4: 9). In addition, spelled flour was the basis of the diet of the Latin populations. Spelled bread was consumed jointly by the spouses in the ritual of the cumfarreatio, the most solemn form of marriage of ancient Rome. Subsequently, after the cultivation of other varieties of cereals, especially wheat, corn and rice, the cultivation of spelled has been decreasing over time it almost disappears. In recent times, however, it has been rediscovered thanks to its excellent dietetic properties. It has become almost a “niche” cultivation, today it finds a natural position in organic farms. The medium spelled is grown in Italy especially in Tuscany, in the Garfagnana (IGP quality certification), at the foot of the Apuane Alps, in the province of Lucca.Tra the other medium spelled is the most important and the most common spelled cultivated in Italy, so much so that it is often considered spelled par excellence. More adaptable than spelled, in difficult environmental conditions, medium spelled is the typical species of the traditional areas of spelled cultivation in central and southern Italy. Within these areas, the long-term cultivation and reproduction of the same genotypes on the site have differentiated the characteristic and characterizing native populations (ecotypes) of the same areas. For this reason the spelled population typical of the various environments differs from the native populations of other areas. Each ecotype, therefore, constitutes an element of typification of the production of its cultivation area, with reference to which it is generally referred to. This cereal is commercially available in two forms: the decorticated spelled (or simply spelled) and the pearl spelled. The farrotto is a “dressed” cereal, as the glumetta, the outer film of the grain, rich in fibers, is very adherent and therefore is not eliminated by normal refining with cylindrical rollers to which the wheat is subject. The hulled spelled preserves the intact pericarp, which is instead eliminated in the pearled spelled, which is much lighter in color and cooks in a decidedly inferior time. The shredded spelled grain can be further ground for the preparation of pastas, bread or biscuits. Spelled flour is also used in the confectionery industry. With spelled flour, a bread is produced, some preferred to that of wholemeal wheat.

Preparation Mode –
Triticum dicoccum is the most widely used spelled for pearl and pasta production. The pearled spelled is a grain of decorticated diced spelled, ie to which its external coating has been mechanically removed. In this way the grain quickly absorbs the water and cooks more quickly, so it is not necessary a soaking and its preparation is really easy. Pearled spelled can be cooked using the same methods as a risotto, keeping in mind only that it takes a few minutes longer. Therefore, it can be served either as a cold dish (eg spelled salad with vegetables, ideal for summer) or as a hot dish, like the typical risotto. The most striking feature of this wheat is to have a lighter gluten and therefore more digestible than durum wheat. This however results in a more delicate paste in terms of cooking resistance. It follows the need for more attention in cooking this pasta, both in relation to the times and the choice of condiments to match. Here are some basic and quick suggestions to cook a good spelled pasta dish: cook the desired pasta shape in plenty of salted water (1 liter of water for every 100g of product); pour a few drops of oil into the water so as not to stick the pasta and turn it from time to time. This particular attention is paid to formats such as tagliatelle, maltagliati and fettuccine, very porous formats that can easily be cured; taste a couple of minutes before the cooking time indicated on the package expires, so that you can drain according to your taste. It is also advisable to use light and delicate condiments to fully appreciate the taste of spelled: white condiments are recommended, with raw oil and seasonal vegetables. In the kitchen it is used above all as an ingredient in soups and soups, in particular spelled soup is known. It combines very well with vegetables and vegetables, enhancing tastes and aromas. Great for cold salads, risotto with porcini mushrooms. It combines excellent with red wines.