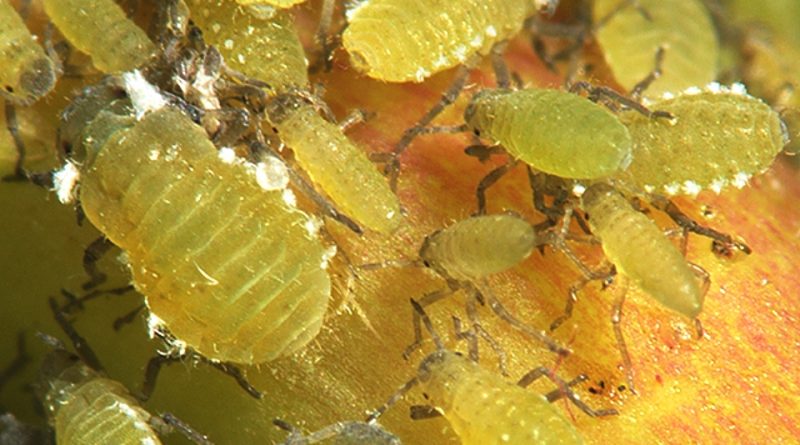 The phage frigate aphid (Patchiella reaumuri Kaltenbach) is a small aphid belonging to the Pemphigidae family.

Geographic Distribution and Habitat –
The phage frigate aphid is an aphid with a cosmopolitan pictorial distribution; in Europe it has a rather fragmented distribution, including Great Britain, but it is probably undersized in some countries. The populations of this aphid, in some countries (Hawaii, Solomon Islands) have lost their primary host and reproduce parthenogenetically throughout the year on the roots of the Aracee.

Morphology –
La Patchiella reaumuri is an aphid that lives in colonies and whose individuals are very clear in the early stages; adults, on the other hand, take on dark purple hues. As they mature, they develop tufts of wax along the sides of the abdomen and all develop into shapeless wings. The length of the body of the winged shapes is 2.1-2.7 mm.

Attitude and biological cycle –
La Patchiella reaumuri is a dioic aphid; the insect winters on the Linden, which is the primary host, at the egg stage. In spring, in the month of April, the first founders appear, from which are originated, also on the Tiglio, some spring-like Partenogenetic generations; these generations determine a marked curling and rolling of the young apical shoots and leaves; the apical shoots necrotize, they stop in the development, with consequent loss of the animal. At the beginning of the summer appear the winged forms (migrants) that are carried on the secondary guests, that are above all reeds of marsh or other spontaneous Graminaceous; subsequently, in the period between late summer and autumn, they return to the Tiglio to lay the eggs that they will have to overwinter.

Ecological role –
The founders of the Patchiella reaumuri are very vigorous, larger, and are visited by the ants (Lasius niger Linnaeus, 1758) who establish a relationship of symbiosis and protection. The ants defend these aphids from predators and consume the copious honeydew that would otherwise be confused with the colony. The founders can produce a very large number of descendants, which grow and develop protected within the nests formed in the leaf crumplings. Patchiella reaumuri and the active ingredient to be used are based on the severity of the infestation and its progression stage that can be found through a sampling of the curled leaves. Also for any intervention to be undertaken one must evaluate the environment in which the guest (avenues, parks or gardens, urban green, production nursery, etc.) and therefore the technical possibility of carrying out the intervention. If the conditions for treatment do not pose risks to public health and the ecosystem (they must be evaluated the presence of natural predators, such as ladybugs, sirfids, some hymenopterans, and of the pronubi) pe r treatments must be used of systemic products to reach those aphids that lives protected inside the leaves crumpled.I treatments, if conditions exist, and the infestation is massive, should be done especially at the beginning of spring to the appearance of the first generation.