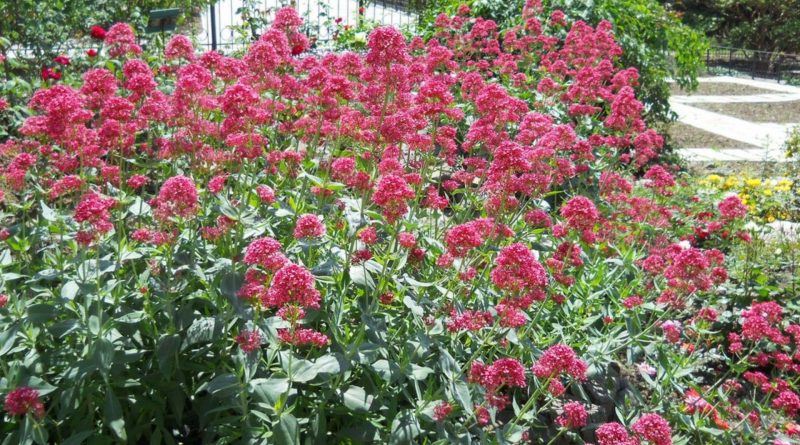 The red valerian (Centranthus ruber (L.) DC.) Is a plant of the family valerianaceae. Typical spontaneous plant of warm climates, the cliffs and rocks, continues to conquer space and now you can meet her in different regions of our country as a natural plant or spontaneizzata.

Etymology –
The genus name comes from the greek = spur Kentron and Anthos = flower, for its Corolla rammed, the name of the species ruber = red is clearly inspired by its color. The term Valerian has instead formed in the Middle Ages from the Latin verb “assert” (heal).

Geographic Distribution and Habitat –
The species is native to the countries of the Mediterranean basin (southern Europe, North Africa and Asia Minor.) Introduced as an ornamental plant in Northern Europe, North America, Australia, it has also naturalized in many areas outside its home area.
In Italy it is located mainly in the central and southern regions and on the islands, but also in the hottest foothills of the Alps.
It grows in the range between 0 and 1,200 meters elevation s.l.m. On the cliffs, in the drywall, ruderal environments.
Species protected in some Italian regions (Piedmont and Abruzzo) and numerous parks and nature reserves. 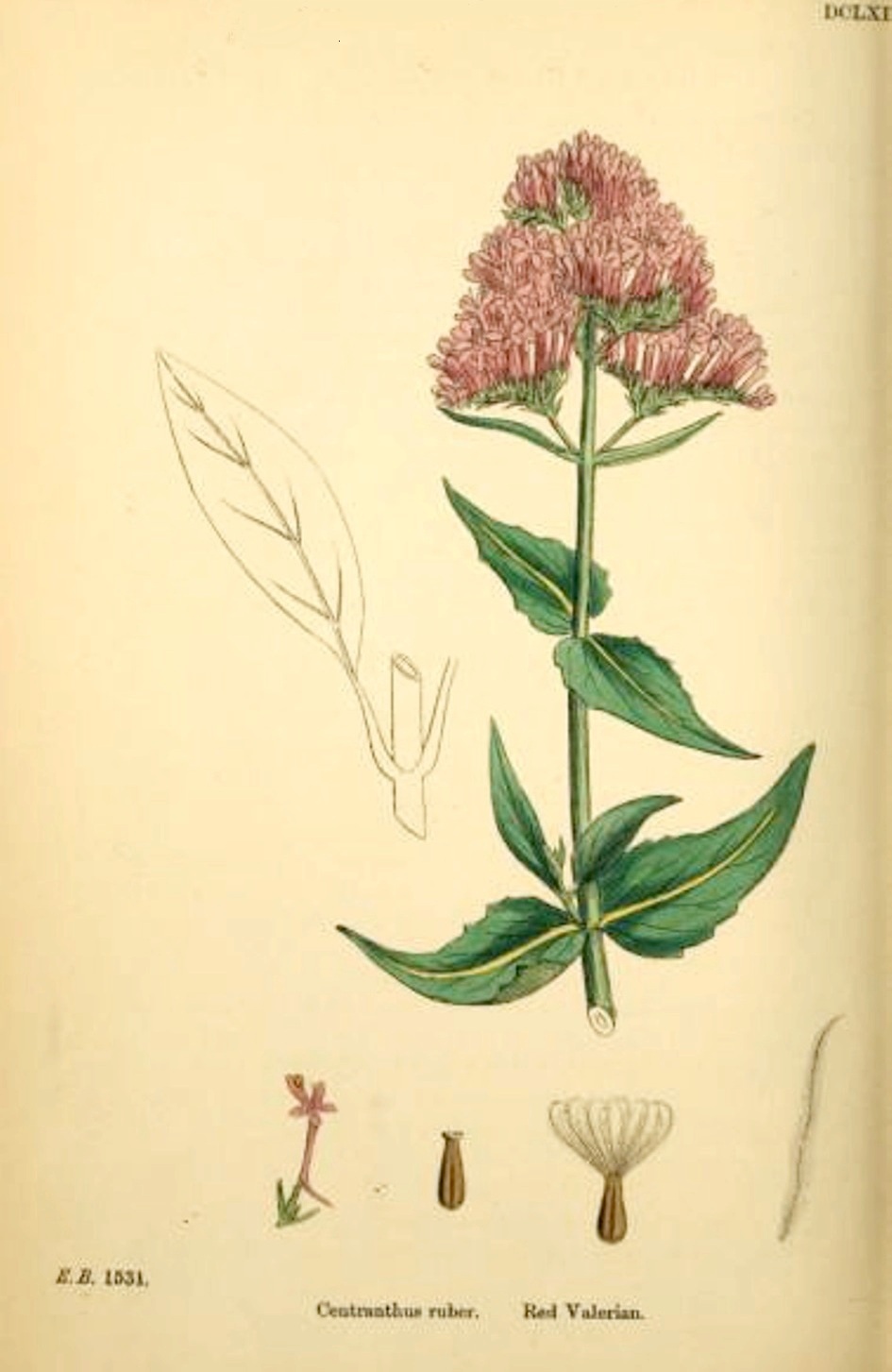 Description –
The red valerian is a perennial plant, camefita suffruticosa, with woody stems only at the base, erect, up to 150 cm high. Stem branched, ascending, woody at the bottom, green with red accents. green-green leaves, lower petiolate with oval lamina lanceolata, the upper sessile, triangular, opposite, with base embracing the stem. Flowers in dense corymbs, small, pinkish-purple color, rarely white, corolla tube about 1 cm, 5 unequal lobes and spur twice as long as the ovary.

Customs and Traditions –
It contains the same way as Valeriana officinalis: sugar, mucilage, rubber, resin and enzymes. Essential oil of blue-greenish color, which has several components such as borneol, camphene, pinene, formic acid and acetic acid.
It can be used for alimentary use; the shoots and young leaves in salads, cooked and sauteed. The boiled roots can become a part of the ingredients of soups. Not everyone appreciates the taste, somewhat bitter, but there is historical evidence of the use of this power plant in southern Italy and in France.
For cosmetological use stresses such as the smell of Centranthus ruber it is much less aggressive than that of Valeriana officinalis and the plant can be used in the bath water for its soothing and calming effects or, as a decoction, for facial bathrooms. The alcoholic extract has an anti-dandruff effect and is useful against skin irritations and pimples.
In pharmacology, being poor relative of Valeriana officinalis, it has all the properties. It is used as a sedative spasm, cure neurasthenic syndromes, insomnia, nevrosicardiache (associated with hawthorn) dysmenorrhea, digestive spasms (combined with passion flower). It ‘a great substitute for the anxiety, because it is non-toxic and non-addictive. It must be pointed out that numerous phytotherapists indicate how the best-known non-replaceable Valeriana officinalis with Centranthus ruber (known as red valerian), because at the moment there are few and poorly documented scientific evidence for the latter essence.
All pharmacological and medical treatments should always be done under strict medical supervision and direct.
In the herbal bitter roots are considered tonic, stimulant, sudorific, antispasmodic, vermifuge. Of the red valerian you can also use the mother tincture of the aerial part, in association with the lavender that potentiates the action. In popular tradition in some European countries it was considered a plant that inspire amorous feelings and aphrodisiac properties: it was used in the composition of love potions. In homeopathy you find present in many preparations.
The earliest records of its use will have to be an Egyptian physician who described the property of V. officinalis. Since then, until the end of 1700, these plants, were attributed, in addition to medicinal properties, even miraculous, like the one to heal the plague, the bites of poisonous animals, asthma, cough, and epilepsy. To claim it, they were renowned doctors and botanists, one of them stated that these herbs cured him from epilepsy.
It was used in herbal medicine for its sedative, antispasmodic and anti-neuralgic, sometimes as a substitute for lettuce, while in gastronomy, as mentioned, the leaves are consumed in addition to the salad.
Thanks to its active ingredients such as tannins, resins, essential oils, alkaloids and its roots have sedative, antispasmodic and anti-neuralgic and in the past have been used as succedanee Valerian. Its seeds were apparently used in the past to obtain potions suitable for embalming.
Popular belief attributed magical powers to this plant, its roots dried and pulverized, stored in bags were used to protect the house from lightning and its leaves were used to calm everyone in love quarrels and reconciled lovers.

Preparation Mode –
The Red Valerian has medicinal properties: anti-neuralgic, Antispasmodics, Sedative and Hypnotic.
The active principles are the essential oil (mainly consisting of valeric acid, bornyl valerate, aldehyde valerianica, pinene, borneol), the alkaloid catenin, resins and tannins.
The red Valerian is a typical plant of the areas close to the sea and is therefore used by the coastal population in replacement of the common valerian with respect to which has, among other things, an odor less unpleasant. Although certain active ingredients are present in a slightly different proportions, the properties of the two plants are practically identical; Red Valerian seems certain authors even more harmless and better tolerated the most important medicinal species. Speaking of the active ingredients of valeriane, it must be said that very recent studies have shown that the sedative properties are largely due to foreign-denominated special valepotriates. Their characteristics are such that it is easy to remove them during the preparation of decoctions or infusions, for which the obtained preparations may be ineffective; from this derives the suggestion to employ powder or juice of the rhizome, as integral parts of the drug, or medicinal preparations (extracts or tinctures) which are obtained through rigorous procedures that will safeguard the properties. Also for the Red Valerian caution is advised in the application, dosage and duration of treatment, always ask your doctor for advice.
internal usage you can use the rhizome. To sleep. Juice (fresh rhizome): 2-5 g per day. Powder: 1-4 g per day in a wafer.
The tisane valerian is a recipe to make a good and relaxing drink. To create this herbal tea we’ll want to get you directly valerian herbal medicine or, if you have the opportunity to use that cultivated and dried just like you and do not use the bags already prepared.
In people who suffer from depression it is recommended to take valerian macerated for about a week.
In case of insomnia, bad rest or sleep disorders in general, it is recommended that a cup of tea with valerian before bedtime.
You can use valerian in case of nervousness and stress.
Valerian exerts its properties outside. Of the tablets soaked in a decoction made of flowers and valerian roots, they will help soothe muscle and joint pain.
Just be careful: if taken in excess, and for more than 8 consecutive days can cause palpitations and headaches as well as addictive. If necessary, it can be reinstated after two weeks. Valerian is recommended for children and pregnant and lactating women.
Below is a method of preparation:
For one liter: 4 teaspoons of dried leaves and flowers valerian, 1 liter of natural mineral water and natural sweetener for sweetening.
To prepare:
1. In a small saucepan bring to boil 1 liter of water.
2. Add dried valerian and boil for a few minutes then turn off the heat.
3. Leave the infusion for about 10-15 minutes.
4. Filter the pouring infused in a glass bottle.
5. Consume the tea to the occasion, preferably after meals.