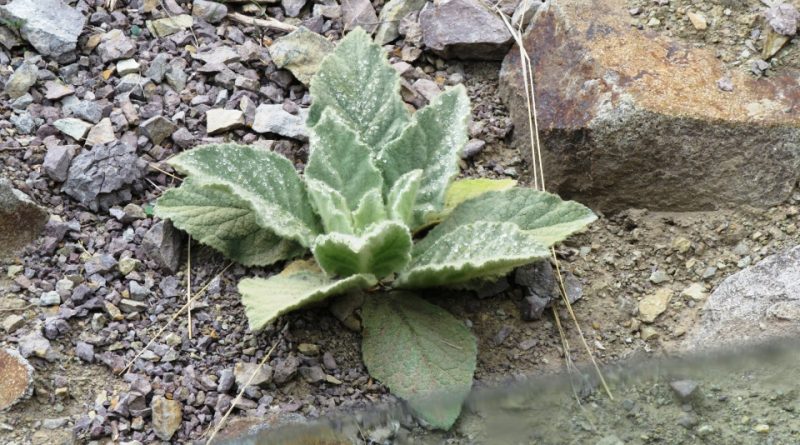 Etymology –
The term Verbascum comes from verbascum, a plant cited by Pliny who places it near the Gr. phlomis and enumerates three species, variously identified (Verbascum album, perhaps Verbascum thapsus; Verbascum nigrum or foemina, perhaps Verbascum nigrum; Verbascum silvestre, perhaps Phlomis fruticosa or Verbascum blattaria). It is a much discussed etymology: it has been linked to beard, for hairy leaves, verber rod, virile member verpa, verbum word, magic formula; none of these explanations are satisfactory. The majority of authors, on the basis of the suffix -asco, think of a Ligurian loan, therefore of a pre-Indo-European origin; Wiczak instead approaches it to the name of the mullein in various Iranian languages ​​of Pamir žirmesk, yermesk, ramesk, which he traces back to an ancient Iranian * gari-masca-, equivalent to the ancient Latin * ver-mascum, with the passage to verbascum due of the connection by popular etymology to verbum. While the second part remains unexplained, the first part should be linked to the proto-Indo-European gwrHi- / gwerHi- mountain.
The specific epithet thapsus comes from the Greek θαψός thapsós tapso, scotano, plants mentioned by Nicander and Theocritus.

Geographic Distribution and Habitat –
The great mullein is a species with a wide Eurasian distribution present, with two subspecies, in all regions of Italy.
It is present in Europe, northern Africa and Asia, from the Azores and Canary Islands in the east to western China, in the north to the British Isles, Scandinavia and Siberia and south to the Himalayas.
In northern Europe it grows from sea level up to 1,850 m of altitude, while in China it grows to 1,400–3,200 m of altitude.
This plant was introduced throughout the temperate world and is widespread in Australia, New Zealand, tropical Asia, La Réunion, North America, Hawaii, Chile and Argentina; it has also been reported in Japan.
Its habitat is that of ruderal vegetation, in wooded clearings, at the edge of roads, in rural settlements, on clayey soils poor in calcium and rich in nitrogen compounds, generally with a subacid reaction, from sea level to the mountain belt. 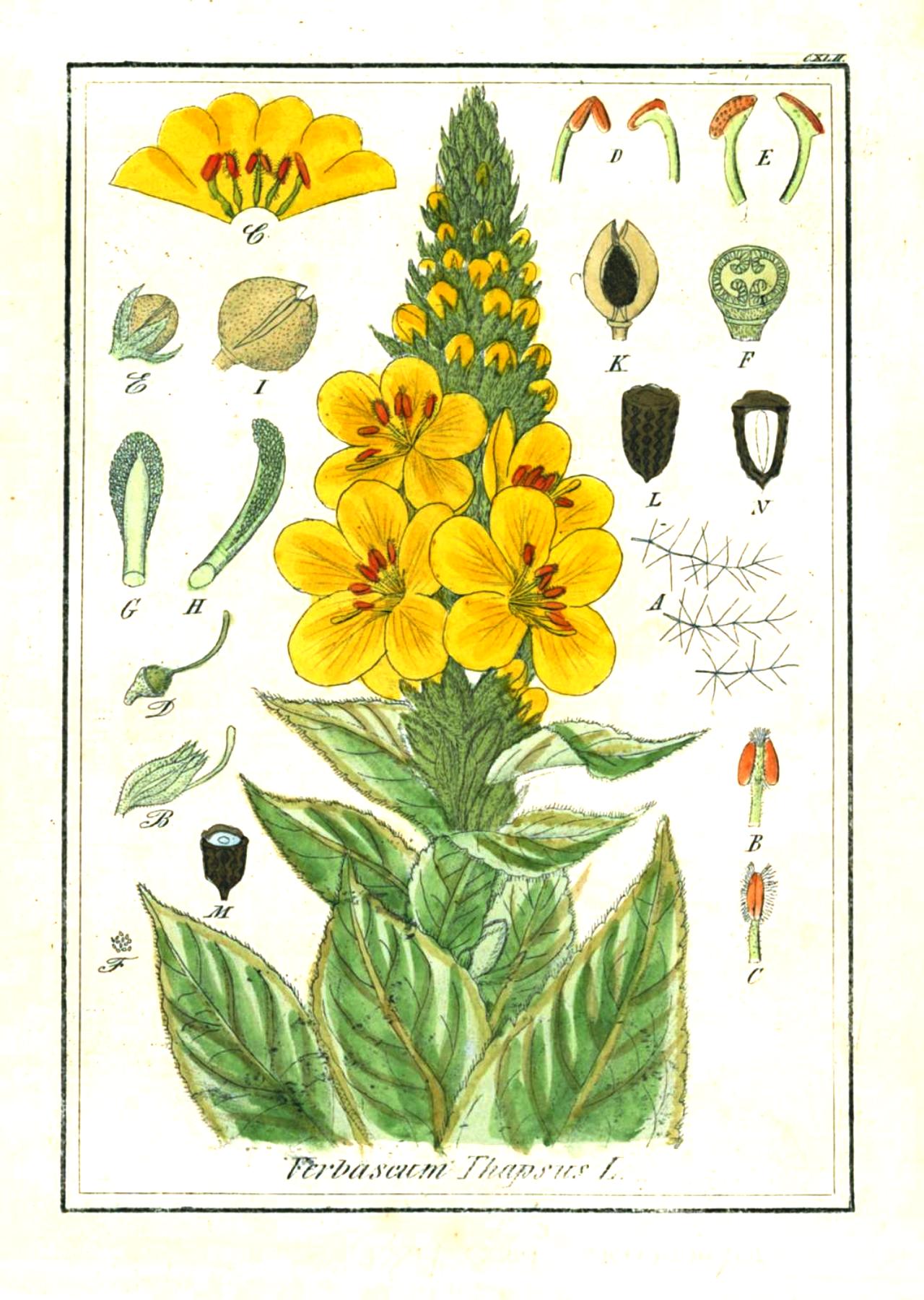 Description –
Verbascum thapsus is a biennial plant that produces a basal rosette consisting of large leaves, up to 45 – 50 cm, obovate, soft, very tomentose, finely serrated, sessile or almost. The plant produces a shallow taproot.
Second year plants normally produce a single unbranched stem, usually 1–2 m tall.
The tall, erect stems end in a dense spike of flowers that can take up to half the length of the stem. All parts of the plants are covered with star-shaped trichomes. This cover is particularly thick on the leaves, giving them a silvery appearance.
The flowering stem is solid and 2–2.5 cm wide and occasionally branched just below the inflorescence.
The flowers are pentamers with (usually) five stamens, a five-lobed calyx tube and a five-petalled corolla, the latter of a bright yellow color and 1,5-3 cm broad; they are almost sessile, with very short pedicels. The five stamens are of two types, with the three upper stamens being shorter, their filaments covered with yellow or whitish hairs and with smaller anthers, while the two lower stamens have hairless filaments and larger anthers.
The flowering period is May-August.
The fruit is a sepicidal capsule, bivalve, 7-11 x 5-8.5 mm, slightly shorter than the calyx, ovoid, tomentose, with a short rostrum and 0.5 mm erect apicle. Very numerous seeds, 0.6-0.8 x 0.5-0.6 mm, oboconical-prismatic with various rows of longitudinal, brownish alveoli.

Cultivation –
Verbascum thapsus is a biennial herbaceous plant that grows in a vast Eurasian range but has been exported to other parts of the world and has been used for some time also in its natural state for various uses.
To be cultivated, it prefers sunny positions and loose and not very humid soils.
It grows most frequently in bare, upset soils, generally on sandy or chalky soils. It grows best in dry, sandy or gravelly soils, although it can grow in a variety of habitats, including slopes, meadows, roadsides, forest clearings, and pastures.
It can be grown as an ornamental plant and, in ancient times, was also widely used to ward off curses and evil spirits.
It grows in a wide variety of habitats, but prefers well exposed soils that spread producing prolifically seeds becoming invasive in the temperate regions of the world.
Propagation occurs by seed.
Sowing is carried out in spring or early summer in broadcasts or in rows with light seed coverage.
Germination usually occurs within 2 – 3 weeks and the seeds germinate almost exclusively in bare soil, at temperatures between 10 and 40 ° C.
If the plants are propagated in the nursery they should then be placed in individual pots and in late spring – summer. The seed has a long viability, up to 100 years, according to some studies.

Customs and Traditions –
Verbascum thapsus is a biennial herbaceous plant that has been harvested for a long time and also used in its natural state for various uses.
This plant is also represented in Caravaggio’s paintings, for example at the foot of St. John the Baptist with the meaning of “root of Jesse”, Isaiah XI, 1.
Although this plant has long been used in herbal medicine, no drugs are produced from its components. Dioscorides first recommended the plant 2,000 years ago, deeming it useful as a folk medicine for lung diseases. The leaves were smoked to try to cure lung ailments, a tradition that was quickly passed on to Native American peoples in America. The Zuni people, however, use the plant in powdered root packs applied to sores, rashes, and skin infections. An infusion of the root is also used for the treatment of athlete’s foot. All drinking preparations must be finely filtered to remove irritating hairs.
Flower oil has been used against catarrh, colic, earache, frostbite, eczema and other external conditions. Topical application of various V. thapsus preparations has been recommended for the treatment of warts, boils, carbuncles, hemorrhoids and chilblains, etc.
Compounds derived from glycyrrhizin, with bactericidal effects in vitro, have been isolated from the flowers.
The plant has been used in an effort to treat colds, croup, sunburn, and other skin irritations.
Among others, it is said that Roman soldiers dipped the stems of plants in grease to use them as torches. Other cultures use the leaves as wicks. Native Americans and American settlers lined their shoes with the leaves of the plant to protect themselves from the cold.
The plant, as mentioned, has been widely used for medicinal purposes, but contains toxic principles, especially in the seeds (saponins); the flowers also provide a yellow or green dye that was used as a hair dye.
In addition to its edible use, for the preparation of a tea this plant is used as a commonly used home herbal remedy, appreciated for its effectiveness in the treatment of pectoral disorders.
Mullein works by reducing mucus formation and stimulating cough with phlegm and is a specific treatment for tracheitis and bronchitis.
The leaves and flowers are anodyne, anti-inflammatory, antiseptic, antispasmodic, astringent, emollient, diuretic, emollient, expectorant and vulnerary.
An infusion is taken internally to treat a wide range of chest ailments and also to treat diarrhea.
The plant combines well with other expectorants such as coltsfoot (Tussilago farfara) and thyme (Thymus vulgaris).
A poultice of the leaves is prepared externally which is a good wound healing agent and is also applied to ulcers, tumors and hemorrhoids.
Any leaf preparation must be carefully filtered to remove small hairs that can be irritating.
An infusion of flowers in olive oil is used as drops for earache or as a local application in the treatment of hemorrhoids and other inflammations of the mucous membranes; this infusion is also strongly bactericidal.
A decoction of the roots was used to relieve toothache and also cramps and convulsions.
The juice of the plant and the powder made from the dried roots was used to quickly remove the rough warts when rubbed on them.
The seeds are slightly narcotic and also contain saponins.
A poultice made from the seeds and leaves is used to extract the splinters.
A decoction of the seeds is used to soothe chilblains and cracked skin.
A homeopathic remedy is made from fresh leaves. It is used in the treatment of permanent headaches.
A yellow dye is obtained from the flowers by boiling them in water; used with diluted sulfuric acid produce a rather permanent green dye, which turns brown with the addition of alkali.
Sometimes an infusion of flowers is used to dye the hair a golden color.
Flowering stems can be dipped in wax and used as torches.
Leaf and stem fluff is a great bait when it’s dry enough.
It is also used as an insulator in shoes to keep feet warm and to make candle wicks.
One report says the leaves contain rotenone, although it does not say in what quantity. Rotenone is used as an insecticide.
Among the substances contained in the plant there are saponins, polysaccharides, mucilages, flavonoids, tannins, iridoid glycosides, lignin and essential oils. The leaves of the plant, in addition to the seeds, have been reported to contain rotenone, although the quantities are unknown.
From an ecological point of view this plant is used by various organisms.
The megachylid bees of the genus Anthidium use the hair (among that of various woolly plants) to make their nests. The seeds are generally too small for birds to feed on, although the American goldfinch has been reported to consume them.
Other bird species have been reported to consume the leaves (Hawaiian Goose) while flowers and leaves are consumed by various animals.

Preparation Method –
Verbascum thapsus is a plant used since ancient times for various uses.
The plant is harvested when in bloom and dried for later use.
The dried flowers are used to prepare herbal teas.
Among the edible uses it should be remembered that an aromatic and slightly bitter tea is obtained that can be prepared by leaving the dried leaves to infuse in boiling water for 5 – 10 minutes.
A sweeter tea can be made by infusing fresh or dried flowers.
The plant is used to make dyes and torches.