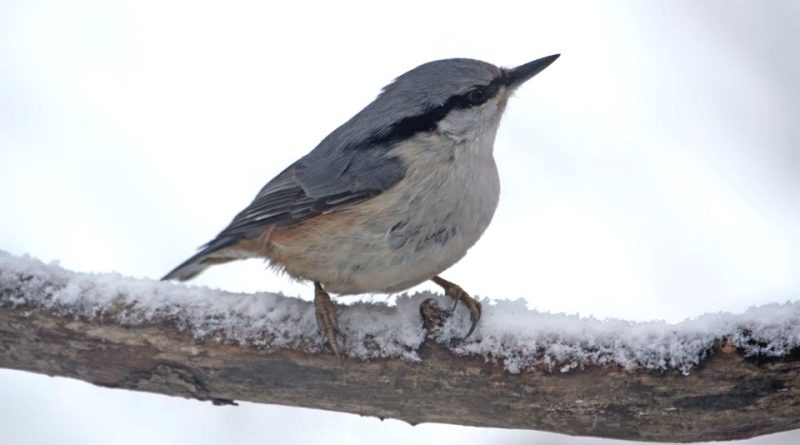 The Eurasian nuthatch or wood nuthatch (Sitta europaea Linnaeus, 1758) is a passerine bird belonging to the Sittidae family.

Geographic Distribution and Habitat –
The Eurasian nuthatch is a bird which, with its different subspecies, is widespread in almost all of central-western and southern Europe, and in some areas of North Africa and the Middle East.
Its reproductive range extends across temperate Eurasia from Great Britain (but not Ireland) to Japan.It is located between the July isotherms 16-20 ° C north to about 64 ° N latitude in western Russia and 69 ° N in Siberia.
It breeds south of the Mediterranean in Europe, although absent from the islands, apart from Sicily, and in most of Russia the southern border is about 54–55 ° N. To the east, the range includes most of China and Taiwan and much of Korea. It is present as a transit in Lebanon and the Channel Islands and in the north a few times in Finland.
In Italy it is widespread everywhere, except in Sardinia.
Its habitat is that of broad-leaved woods (more difficult in coniferous woods), but it is possible to meet it in parks, gardens and orchards near the inhabited centers. 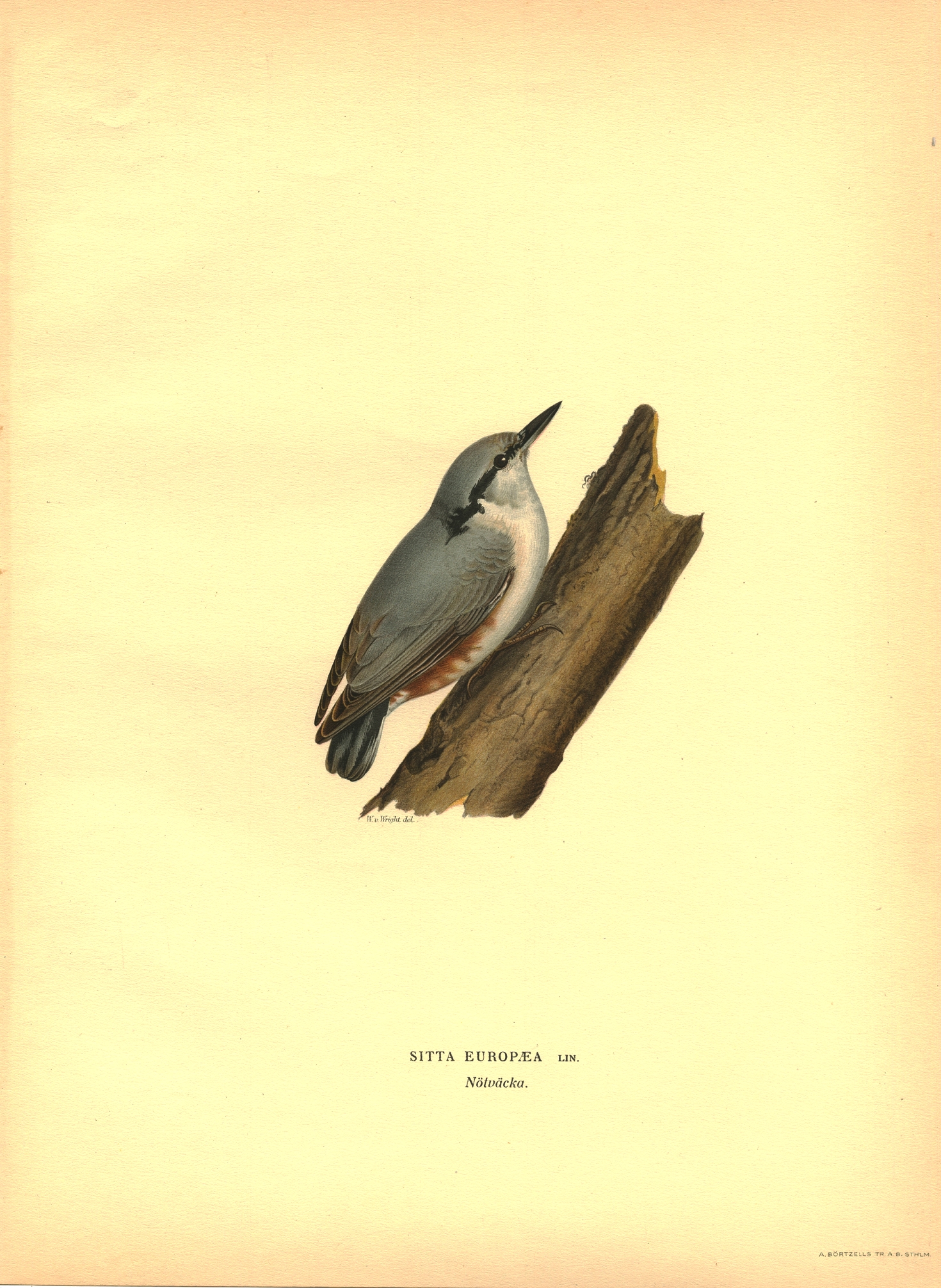 Description –
The Sitta europaea is a bird with a length of about 14 cm and a weight of 22-25 g and a wingspan of 25-27 cm.
It has a lively, gray-blue plumage on the head, back, wings and tail, while the abdomen is orange. The cheeks and throat are white; a black stripe crosses the eyes up to the beak which is also black, long, pointed and very robust. The tail and legs are relatively short.
The flight is not fast but rather light. The peculiarity of this bird consists in climbing (even with head down) on the trunks of the trees with rapid spiral runs, with the help of its tail.
It is also a very frequent and lively singing bird similar to a tui-tui-tui.

Biology –
The Eurasian nuthatch begins its breeding phase in April.
It is a monogamous species and a couple occupies a reproductive territory in which it also spends the winter. The size of the land varies from 2 to 10 hectares in Europe to an average of 30.2 hectares in the sub-optimal coniferous forests of Siberia.
The male sings to defend his territory and attract his mate. Both sexes have a display of courtship with a fluttering and shaking flight, and the male also makes circular flights with his tail spread out and his head raised. He also feeds the female while she courts her.
Despite permanent mating, genetic research in Germany showed that at least 10% of the juveniles in the study area were sired by another male, usually from an adjacent territory.
The nest is built in the resistant cavities of trees or walls, where there are welcoming cavities. If the entrance hole turns out to be too large, this species reduces it in size, applying a slurry of mud and saliva which once dry turns out to be very resistant.
Here the female lays a variable number of eggs from 5 to 10 (white with red spots) even if at times up to 13 eggs are laid, and the hatching lasts about two weeks. Both the male and the female take care of raising the young, which after about 24 days from birth are able to get by on their own.

Ecological Role –
Most of the populations of the Sitta europaea are sedentary, apart from some post-reproductive dispersion of young birds, and there is a reluctance to cross even short stretches of open sea.
Their preferred habitat is mature woodlands with large, old trees, which provide extensive growth for foraging and burrows for nesting. In Europe, deciduous or mixed forests are preferred, especially when they contain oaks. Parks, old orchards and other woodland habitats can be occupied as long as they have at least a 1 Ha block of suitable trees. Particularly in the mountains, old spruce and pine forests are used and pine is also favored in Taiwan. In most of Russia, conifers are used for nesting, but the population density is relatively low. Moroccan birds nest in oak, Atlas cedar and fir. Unusual habitats include the dwarf juniper in Mongolia and the rocky soil in a limited part of southern Siberia.
In the north of its range it is mainly a lowland bird, but reaches the treeline in Switzerland, at 1,200 m or more, and occasionally breeds at 1,800–2,100 m in Austria. It breeds at similar levels in the mountains of Turkey, the Middle East and Central Asia. It is mainly a mountain bird in southern Japan, 760–2,100 m and Taiwan, 800–3,300 m, but in southern China it lives in the highlands.
The sedentary nature of this species means that juveniles can only acquire territory by finding a free area or by replacing a dead adult. In Europe, young birds almost always move to unoccupied habitats, but in the larger territories of Siberia most live within the breeding area of ​​an adult pair.
The annual survival rate of adults in most of its range is around 51%, and a small Belgian study found a local survival rate of 25% for juveniles. The typical lifespan is two years and the maximum known age for a wild bird is 12 years and 11 months in the UK.
As for nutrition, during the summer it feeds on insects while in the rest of the year it searches for seeds, fruits, acorns and nuts, which it opens with small but decisive strokes of the beak once positioned between the holes in the bark. (hence the name of woodpecker).
In detail, the insects it feeds on are made up of caterpillars and beetles. In autumn and winter, the diet is supplemented with nuts and seeds, preferring hazelnuts and the beech tree. The chicks feed mainly on the insects preferred by the parents, with some seeds. Foods are found mainly on tree trunks and large branches, but smaller branches can also be studied and food can be taken from the ground, especially outside the breeding season. Nuthatches can forage for food when descending trees headlong, as well as when climbing. Some prey is caught in flight, and a nuthatch will remove rotten bark or wood to reach the insects, though it cannot chisel into healthy wood like a woodpecker. A pair may temporarily join a mixed species foraging flock as it passes close to their territory. The Eurasian nuthatch readily visits bird tables and bird feeders in the winter, eating man-made foods such as fat, cheese, butter, and bread. The intake of offal for slaughter was even recorded. Large hard foods such as nuts or large insects are stuck in the crevices of the tree bark and crushed with the strong beak.
Plant food is stored all year round, but mainly in the fall. Individual seeds are hidden in cracks in the bark, occasionally in walls or in the ground. The food is usually hidden with lichen, moss or small pieces of bark. The food is then retrieved when it is cold. Siberian birds store Siberian stone pine seeds, sometimes accumulating enough to last a full year. Preserved food can sometimes consist of non-plant material such as pieces of bread, caterpillars, and grubs, as the grubs are incapacitated due to beating. Hoarding is a long-term strategy, stored foods are only consumed when fresh food is hard to find, sometimes for up to three months.
As for its enemies and predators, the Sitta europaea is mainly subject to the sparrow hawk.
A Swedish study showed that 6.2% of S. europaea nests in their study area were plundered by predators.
Also present are some parasites such as mites of the genus Ptilonyssus, such as P. sittae, which have been found in their nasal cavities.
Intestinal worms include the nematodes Tridentocapillaria parusi and Pterothominx longifilla. Small studies in Slovakia and Spain found no parasites in the blood, but a larger Spanish investigation found some evidence of Plasmodium infection.
With reference to its state of health over the entire range, the Sitta europaea, according to the IUCN Red List, is, at the moment, of minimal concern.
The European population has been estimated at 22.5–57 million birds, suggesting a global total of 45.9–228 million individuals. China, Taiwan, Korea, Japan and Russia each have between 10,000 and 100,000 breeding pairs. The known reproductive area is approximately 23.3 million km2 which is a large percentage of the potential habitat on which it can live.