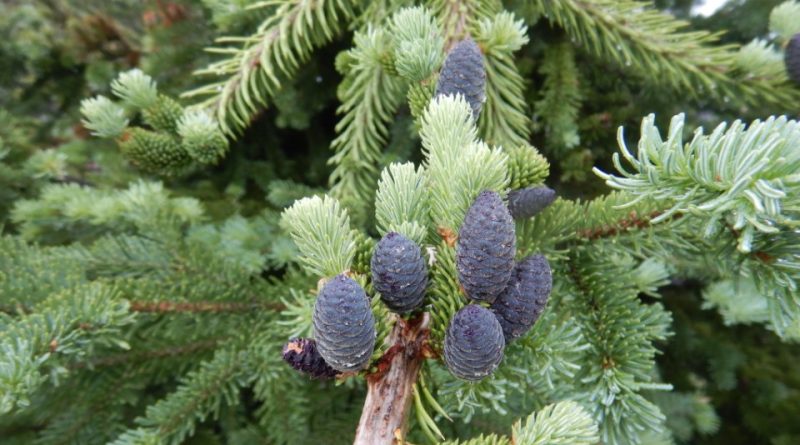 The subalpine fir or rocky mountain fir (Abies lasiocarpa (Hook.) Nutt., 1849) is an arboreal species belonging to the Pinaceae family.

Etymology –
The term Abies comes from Abies which is the classical Latin name (Virgil, Egloghe, from the Sanskrit root abh gush of resin); according to another interpretation it would derive from the Greek word ἄβιος = long-lived.
The specific epithet lasiocarpa derives from the Greek roots λαιοϛ = woolly, pubescent and καρποϛ = fruit, referring to the typical pubescence of strobili.

Geographic Distribution and Habitat –
The subalpine fir is a conifer native to North America and distributed in particular in the mountains of the Yukon, British Columbia and western Alberta, in Canada; while in the United States it is present in south-eastern Alaska, in the states of Washington, Oregon, Idaho, western Montana, Wyoming, Utah, Colorado, New Mexico, Arizona, north-eastern Nevada, and the Trinity Alps in northwestern California.
Its habitat is that of the territories from sea level to 1,500 m of altitude in the northernmost part of its vast range, from 600 to 3,500 m of altitude in the Rocky Mountains and in the Chain of Cascades; it has no particular climatic and soil requirements, frequenting areas with annual rainfall ranging from 600 to 3,000 mm. It forms both exclusive and mixed woods, in combination with Tsuga mertensiana in the northwest and with Picea engelmannii in the Rocky Mountains; the Arizonica variety is also common in association with Pinus aristata and Pinus flexilis. 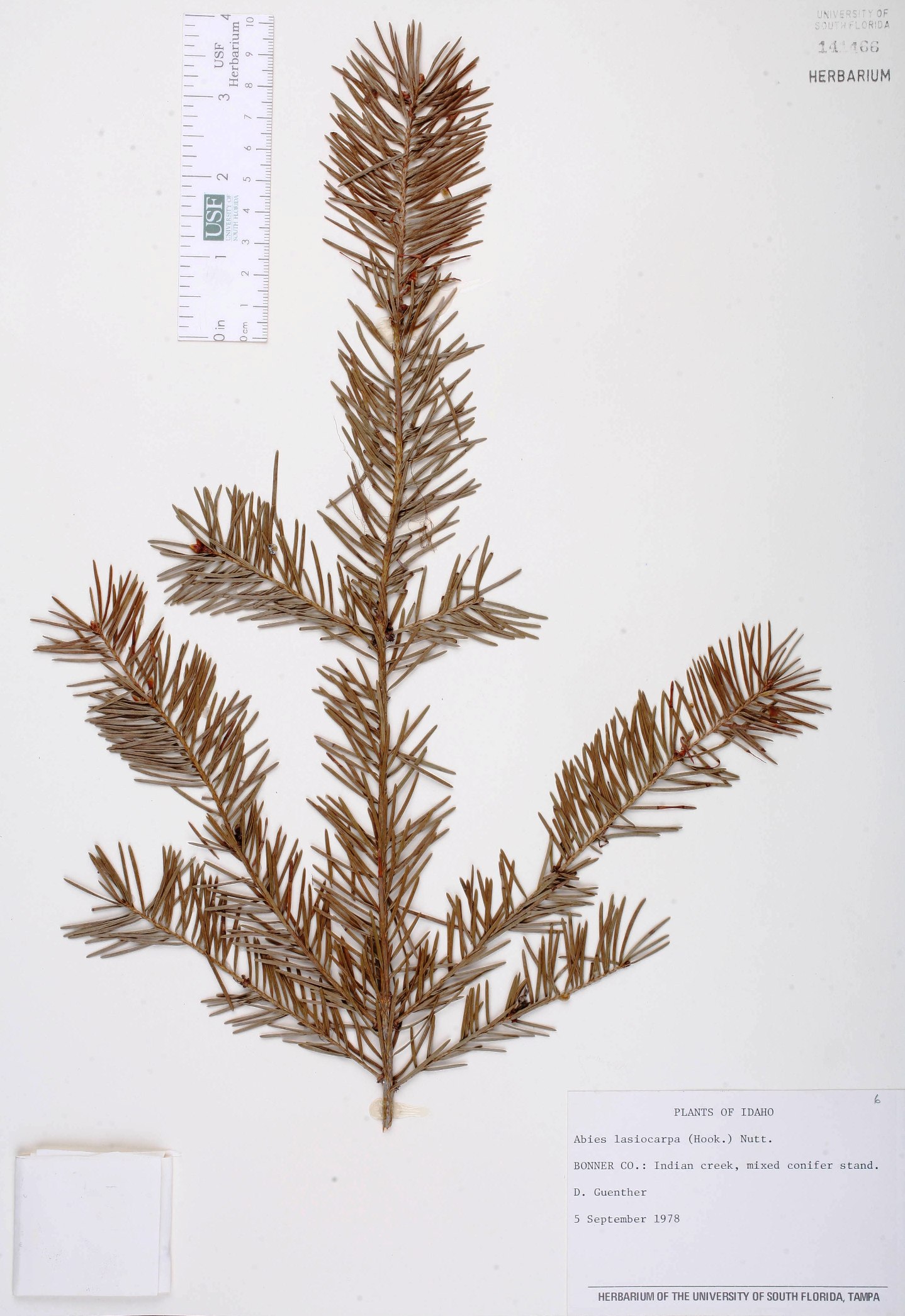 Description –
The Abies lasiocarpa is a tree up to 30 m high but which in some specimens can reach up to 45 m.
The trunk has a diameter of 0.8 m, straight and conical.
The bark is gray and smooth when young but becomes fissured with age.
The main branches are straight, rigid, the secondary ones in pairs, opposite and spirally arranged, of a greenish gray or light brown color; at the age of two the bark splits, revealing the red-brown underneath. The buds vary from light to dark brown and are round in shape, with a rounded apex too; The pearls that cover them are short, glabrous, triangular, with a crenate or toothed margin.
It has needle-like, bluish green leaves, up to 3 cm long, facing upwards, with a pungent odor caused by ß-fellandrene, a terpene that is part of the family of essential oils.
The strobili are dark purple in color, they are cylindrical, up to 12 cm long and up to 4 cm broad, with scales of 1.5 cm, pubescent; the pollen emitted is purple. The seeds, brown in color, are about 6 mm long, with 1 cm light brown wings. At germination, the cotyledons are 4-5.

Cultivation –
Abies lasiocarpa is an evergreen tree that grows in an area that varies from coastal mountain sites to those in the hinterland. The snow that accumulates on the branches helps protect them from the wind and heat. Fir trees in general act as a fence for snow, leading to the creation of lawns through an accumulation of extra moisture.
It is a very shade tolerant plant, but very vulnerable to fire, short lived and slow growing. Although it has a weaker wood than some of its associated with the wood, it can survive thanks to its ability to adapt and reproduce by layering in clusters at high altitudes. The species has benefited from the suppression of fires in recent years.
For its cultivation it should be taken into account that it is a plant that grows in the temperate zone, at altitudes up to the subalpine region. The climate is cold everywhere, but humid in the north-west of its range and dry in the south. Precipitation varies between 500 and 3,000 mm per year.
In a dormant state it tolerates the cold very well, but the spring vegetation is susceptible to frost damage. Although it is very cold hardy, in areas with milder winters it becomes susceptible to damage from aphids and late frosts.
From a pedological point of view it prefers a good moist but not waterlogged soil and grows well in heavy clay soils. It also prefers slightly acidic conditions up to a pH of about 5.
The plant is very shade tolerant, especially when young, but growth is slower in dense shade and is intolerant to air pollution and prefers to grow on a north-facing slope.
In reproduction, the seedlings should be planted in the open field when they are quite small, between 30 and 90 cm in height. Larger trees take root with difficulty and have a stunted development for some years, which also negatively affects root development and wind resistance.
It is a species that easily hybridizes with other members of the genus.
Propagation occurs by seed and sowing should be done in late winter in a greenhouse or outdoors in early spring. Germination is often poor, usually taking about 6 – 8 weeks. The stratification technique is recommended to have a more uniform germination, so it is better to sow the seed in an unheated seedbed as soon as it is ripe in autumn.
The seed remains viable for up to 5 years if well preserved and the young seedlings that are formed should be placed, as soon as possible, in individual pots, where they will be grown for the first winter and then transplanted in the open field.

Customs and Traditions –
Abies lasiocampa is a conifer whose leaves, when crushed, give off a balsamic aroma.
This plant also has edible and medicinal uses.
The tips of the buds are used as a tea substitute while the cones can be ground into a fine powder, then mixed with fat and used as confectionery. It is said to be a delicacy and a digestive aid.
The resin from the trunk is used as chewing gum and is reported to cure bad breath.
Furthermore, the inner bark is often dried, ground into powder and then used with cereal flours to make bread, etc.
The seeds, although too small, are generally oily with a resinous flavor and can be eaten raw or cooked.
In the medicinal field, the rubbery exudate that appears on the bark is antiseptic; this can be dipped in water until soft and then applied to wounds.
An infusion of resin was used as an emetic to cleanse the interiors.
The resin was also chewed to treat bad breath.
A decoction of the bark is used as a tonic and in the treatment of colds and flu.
A poultice made from the leaves was used to treat chest colds and fevers.
Also, in traditional local medicine, an infusion was used to treat cough with blood, which may be the first sign of tuberculosis, and as a laxative.
Among other uses it should be remembered that the young leaves and fragrant twigs are used to repel moths or are burned as incense; they were also ground into powder and used to make talcum powder and perfumes.
From the bark a gum is obtained which is antiseptic and was chewed by the Indians of North America to clean their teeth; it was also used as a mastic to plug holes in canoes.
An infusion of leaves is used as a hair tonic.
The leaves can also be placed in shoes as a foot deodorant.
Wood is used as a fuel and is said to burn for a long time but is not used commercially, except locally for small carpentry jobs, mainly due to the inaccessibility of its growing areas. Apart from perhaps some cultivars such as the arizonica variety, it is a species of little importance also as an ornamental, even if used in parks and gardens, despite its youthful appearance as a perfect Christmas tree, due to its very slow growth speed.
Light wood is considered to be of poor quality, but is sometimes used for pulp, general structural purposes, and papermaking. It can also be used as a bonsai and was occasionally planted as a wood tree in Northern Europe.
From an ecological point of view it is a refuge plant for many animals, including mountain goats. The bark is peeled from the game and its leaves eaten by the grouse. Songbirds, Richardson’s grouse, Cascade pine squirrels, and other mammals consume the seeds. It hosts pathogenic fungi such as the Delphinella balsameae species.
Abies lasiocampa is the most widespread fir, after Abies balsamea, in North America. The plant is classified as “Least Concern” in the IUCN Red List of threatened species (2013), this also because, in addition to having a very large range, it has a low importance in the exploitation of forest resources, due to the relative inaccessibility of the areas. frequented, and the abundance of other species of conifers with equivalent wood quality.

Preparation Method –
The Abies lasiocampa is a conifer used above all in the past by local populations, as mentioned, both for food and medicinal use or other uses, while the wood was used mainly locally.
In addition to some food uses described, Native Americans used the leaves as deodorants and burned them as incense or medicinal steam. The powdered bark and other components were used in the cold treatment solutions. The resin was used to dress wounds or chewed as gum. Tree branches were used for litter. Some highland Indian tribes drank or bathed in a subalpine fir boil to purify themselves or to grow their hair.