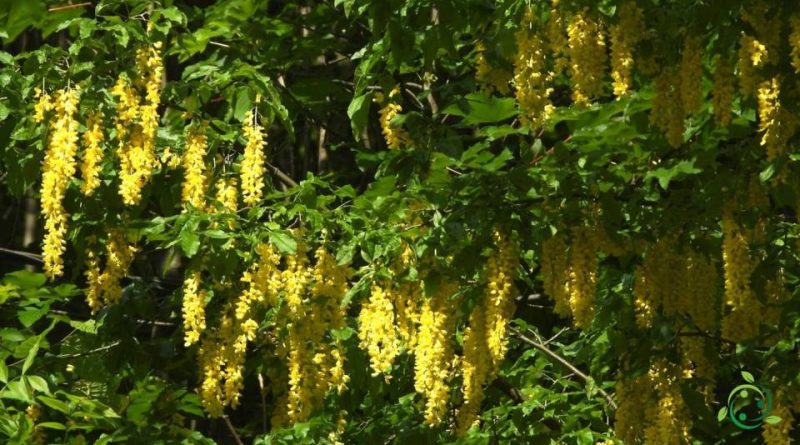 Scotch laburnum (Laburnum alpinum Prels., 1835) is a small tree of the Fabaceae family, native to central and southern Europe.

Suitable breeding habitat –
Laburnum alpinum is a plant native to central and southern Europe and has naturalized even further north to Scotland.
Its distribution range is that of central-southern Europe where it grows and blooms generally between 1000 and 1500 meters above sea level, but it can be pushed in favorable conditions up to 2000 meters.
Its habitat is that of well-drained surface soils, with basic or sub-acid pH.
In Italy it is more frequent in the Alps than in the Apennines where it is present in the Fagetum area (in the Alps up to 1,500 meters above sea level), unlike the Laburnum (Laburnum anagyroides Medik.) Present at lower altitudes in all regions except for islands.

Propagation –
Scotch laburnum is a plant that is often grown as an ornamental tree.
It is a plant that prefers well-drained, light (sandy), medium (loamy) soils, but tolerates heavy and nutritionally poor clay soils.
It can withstand strong winds but not marine exposure and tolerates air pollution.
It is a plant that establishes a symbiotic relationship with some soil bacteria, these bacteria form nodules on the roots and fix atmospheric nitrogen. Some of this nitrogen is used by the growing plant, but some can also be used by other plants growing nearby.
Propagation can occur by seed. Sowing should be done in an unheated seedbed, in autumn or spring, when the seed is ripe and germination is generally very fast and good.
The young seedlings are then placed in single pots when they are large enough to manage them, and then transplanted in the summer.
To facilitate germination, it is possible to pre-soak the seed stored for a period of 12 hours in lukewarm water; after which it is sown in seedbeds in early spring.
Propagation can also be agamic through mature wood cuttings to be carried out at the end of winter and planted in the ground.
Seedlings or cuttings can grow for two years before planting them in the winter.
In fact, plants can be successfully transplanted even when they are large enough.

Ecology –
The Scotch laburnum is a precious plant for its frugality, managing to vegetate tenaciously even along gullies crossed by avalanches, thanks also to its good ability to drive back suckers; it is often used for reinforcing escarpments and landslide slopes, also for the ability to enrich the soil with nitrogen. The wood, characteristic for its evident brown heartwood, is used, due to its high hardness and resistance, in palisades in the mountains and also in handcrafted works on the lathe, for inlay and cabinet making (it is called “false ebony”).
Furthermore, in the silvicultural field, Laburnum alpinum can be used in environmental recovery interventions when the soil is not too acidic for optimal plant growth. In the succession of habitats it generally prepares the beech forest. Thanks to the beautiful flowering it is also a popular ornamental plant that is used in mountain environments; however, it should be avoided in environments that are too frequented, in particular by children, due to the toxicity of various parts of the plant.
The toxicity is linked to the presence of the cytisine alkaloid (with paralyzing action), present in all parts of the plant, but particularly in the seeds, which therefore gives it high poisonousness.