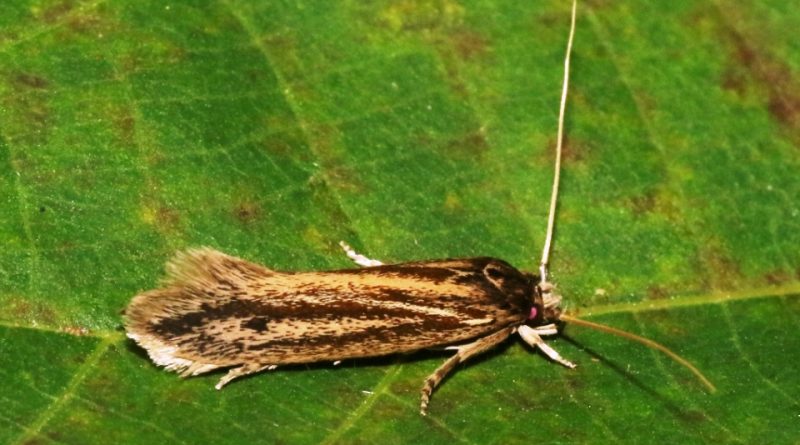 The banana moth (Opogona sacchari Bojer, 1856) is a moth belonging to the Tineidae family.

Geographic Distribution and Habitat –
The Opogona sacchari is a species first described by Wenceslas Bojer in 1856. This moth is native to the tropical and subtropical humid regions of sub-Saharan Africa, where it is also found in Madagascar, Mauritius, Reunion, Rodrigues Island, Seychelles and Sant ‘Elena. It was first reported from the Canary Islands in the 1920s. In the 70s it was then introduced in Brazil and Central America and, subsequently, it also appeared in Europe and reported in Florida since 1986.
This insect today is particularly widespread throughout Africa (where it is a dangerous phytophagous of bananas), and in South America.
However, there are increasingly frequent reports also in Europe, particularly on ornamental plants grown in greenhouses, thanks to the importation of plant material from the aforementioned countries.
In Italy, especially in greenhouses where it can also be established permanently, there have been reports of attacks especially on Dracaena sp., Sansevieria, Kentia, Chamaedorea, Ficus, etc.
The habitat of this butterfly is linked to a large number of plants, including bananas, pineapples, bamboo, corn and sugar cane. In greenhouses of European countries it has been found as a weed on various tropical or subtropical ornamental plants, including Cactaceae, Dracaena, Strelitzia and Yucca, but occasionally also Alpinia, Begonia, Bougainvillea, Bromeliaceae, Chamaedorea and other palms, Cordyline, Dieffenbachia, Euphorbia pulcherrima , Ficus, Gloxinia, Heliconia, Hippeastrum, Maranta, Philodendron, Sansevieria, Streptocarpus sect. Saintpaulia, peppers and aubergines. The larvae burrow into the plant tissue.

Morphology –
The Opogona sacchari is a butterfly with a wingspan of 18-25 mm and a length of about 21-26 mm.
The front wings may show a darker brown longitudinal band and in the male a dark brown spot towards the apex. The hind wings are lighter and brighter. The adults are bright yellowish brown and the head is bright reddish brown with pronounced antennae.
The pupae are shorter than 10 mm, brown and form in a cocoon of about 15 mm.
The larvae are greyish white in color and measure about 30 mm when ripe.

Attitude and Life Cycle –
The Opogona sacchari is a moth that has a life cycle of about three months at a temperature of 15 ° C.
The eggs, after laying, hatch in 12 days while the larval development lasts about 50 days; the pupal stage occurs in 20 days and adult life is 6 days.
In the case of high populations there is damage to the aforementioned plants which consists in the tunnels that the phytophagous larva digs in the stems, intensely gnawing them until they are emptied (very serious in Tronchetti), or at the level of the collars of the host plants, with consequent collapse of the part aerial.
In some cases it can affect the leaves (as in the Ficus) or the shoots.

Ecological Role –
In case of serious infestations of this insect it is necessary to carefully evaluate all the ecological variables and the intervention period in order not to create greater imbalances than the intervention itself.
The chemical fight against this pest, among other things, is not very easy given the behavior of the larvae which, in many cases, live in the endophytic state inside the host’s organs, which are sometimes woody.
On the other hand, good prospects for controlling the phytophagus are obtained with biological control using the entomoparasitic nematodes: Steinernema carpocapsae and Steinernema feltiae; these are distributed on the infested plants or at the collar, with dripping to the substrate; in conditions of high ambient humidity, they actively search for the larvae of the phytophagous inside the infested organs.
In case of attacks on leaves or in any case on external plant tissues, Bacillus thuringiensis ssp can be used instead. kurstaki.