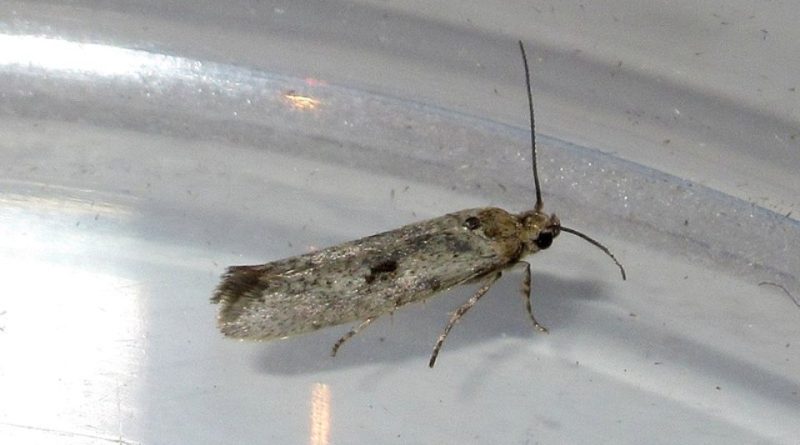 The olive moth (Prays oleae Bernard, 1788) is a small moth belonging to the Praydidae family.

Geographic Distribution and Habitat –
Prays oleae is a phytophagous insect of the olive tree where it represents one of the most important adversities of this cultivation and widespread in all Italian olive growing areas. This moth is widespread above all in southern Europe, and especially in the Mediterranean area and in North Africa.
The species is widespread throughout the original olive cultivation area, from the Black Sea to the Atlantic coasts of the Iberian Peninsula and North Africa. Despite the wide diffusion that the olive tree has had in other areas with a Mediterranean climate, currently the Prays oleae area is limited to the Palearctic region only. However, export to other regions is feared.
Populations have also been found further north up to Great Britain and also outside the continental range.

Morphology –
The Prays oleae, at the adult stage, is a small butterfly with a wingspan of 11-15 mm and a substantially uniform morphology of the two sexes, with slightly smaller dimensions in the males than in the females.
It has a globular head, with relatively long, thread-like antennae, made up of 35 items.
The thorax has a brownish speck on the scutellum.
The wings are fringed with a silver gray livery; has blackish speckles in the first pair. The posterior ones have a lighter and more uniform gray color and have a long fringed posterior margin. At rest, the wings are folded over the abdomen.
The mature larvae, which have an eruciform appearance, measure about 8 mm in length; they are light brown in color, with greenish longitudinal bands, dorsally, and yellowish, ventrally. Brown or blackish-brown pigmentations are present in correspondence with the head, the prothorax and the anal region.
These range from the size of about half a millimeter in length (newborns) up to 7-8 mm (mature 5th age larva).
The chrysalis is about 5 mm long, is brown in color and is enclosed in a small whitish cocoon of thin silk.
The eggs have a lenticular shape, slightly convex and with a slightly elliptical profile, about half a millimeter in diameter. Immediately after the deposition they are white in color but with the development of the embryo they turn yellow, then reddish and, finally, brown. In the event of a miscarriage, the color returns to yellow.

Attitude and Life Cycle –
The olive moth spends the winter with the phyllophagous generation at the stage of larva, in the leaves. the flickering begins in spring, in the period of April-May.
After mating, the females lay their eggs on the flowers, usually one egg per flower.
The larvae will come out after about 1-2 weeks and these feed until maturity, nibbling the flowers and covering them with silky threads; each larva can attack and destroy even a few dozen flowers.
The mature larva then incrisalida in a small cocoon, on the inflorescence.
The adults therefore appear in the period of May-June; the females of this generation are more prolific than the previous ones and lay their eggs mainly on small fruits.
It will be from these eggs that, after a few days, the carpophagous generation formed by the larvae that attack the fruits, penetrating to the innermost part, also destroying the seed.
Around the month of September they reach maturity, abandon the fruit, near the peduncle, and pupate among the leaves.
Thus we arrive in the period of September and October when we have the flicker of adults who thus begin the 3rd generation. These eggs lay, generally in October, on the leaves; the newborn larvae penetrate the leaf parenchyma by digging thin tunnels, usually in the shape of an “S”, in which they remain until the end of winter.
At the first change in late winter-early spring temperatures, the larvae resume their activity, attacking various leaves until, when they reach the fifth age, they gnaw the leaves from the outside. Towards the month of March-April they crystallize.
With this biological cycle the Prays oleae therefore completes 3 generations a year.

Ecological Role –
Prays oleae is one of the most important olive pests, second in importance and relevance to Bactrocera oleae.
However, the incidence of this insect on the damage caused to the olive tree does not agree with all the authors.
The literature indicates, in general and in ordinary conditions, a scarce economic importance of the damage caused to the leaves and flowers, in relation to the morphological and physiological peculiarities of the olive tree, while the extent of the damage caused to the fruits is rather variable and uncertain. : attacks on the drupes cause them to fall early or late, but always before ripening, leading to a reduction in production. Estimating the damage caused by the “parasitic drop” is however difficult due to the overlap with the same phenomenon caused by physiological or environmental factors of another nature and the ability of the olive tree to compensate for fruit losses by increasing the unit yield of residual fruit.
Furthermore, it must be pointed out that Prays oleae is subject to high mortality due to natural causes, so there is no well-defined and constant correlation between the size of the population and the extent of the damage. It is also contained by various predators, including:
– Rincoti Antocoridi;
– Chrysopid neuropterans;
– Diptera Hoverflies; parasitoids:
– geniaspis fuscicollis praysincola, Chalcidid hymenoptera;
– Chelonus elaeaphilus and Apanteles xanthostigma, Braconidae Hymenoptera.
Furthermore, it is generally agreed that this phytophagus proves to be really harmful only in certain vintages and, probably, in certain regions or in particular agronomic contexts.
Among other things, in some European and North African regions the species is considered of secondary importance and is not affected by specific systematic control interventions. However, the impossibility of intervening with curative methods to ascertain an infestation of particular entity and the difficulty of preparing forecasting models that can be carried over time and space, mean that this species is associated with a particular uncertainty which makes it a variable difficult to predict.
The damages caused by Prays oleae concern both flowers, fruits and leaves even if the infestation of the leaves and a good percentage of the flowers does not cause appreciable damage.
On the other hand, the attack on fruits is more relevant, which can actually cause economic damage.
The damages are caused by the trophic activity of the larvae and are related to differences related to the three generations:
– 1 generation; these larvae (anthophagous generation) penetrate inside the flower buds, destroying the various reproductive organs;
– 2nd generation; these larvae (carpophagous generation) attack small fruits when their dimensions are about 5 mm in diameter; the larvae dig tunnels in them up to the endocarp, causing the early drop of the fruit itself; this is the most dangerous generation;
– 3rd generation; these larvae (phyllophagous generation) dig tortuous tunnels in the leaf parenchyma; when ripe the leaves are eroded from the outside. These larvae can also get inside the shoots causing them to dry out.
To contain the infestations of Prays oleae it is important the monitoring technique that can be carried out thanks to the pheromone traps. These traps intercept the males of the species and give us indications on the flight curves of the different generations.
However, it must be emphasized that the sex pheromone trap method does not give an exact indication of the total number of the population present. Not having good precision, therefore, this technique cannot be used for mass trapping. In fact, where it has been tested, it has given poor results.
In any case, pheromone traps allow us to understand the real presence of the moth, and therefore it is appropriate to use them for this purpose.
Monitoring of the moth on olives can also be done visually, especially in the case of the carpophagous generation.
Fruits can be sampled in two ways:
– evaluating the early drop;
– by transversely cutting a small sample of olives on the tree suspected of being attacked by the moth. In this way you can understand if there are eggs or larvae in the olive.
prevention against this pest is not easy to manage.
One way followed, where the presence of the moth is frequent, is to choose varieties with small drupe where the phytophagous finds more difficult conditions. Furthermore, the attack has less impact on the total number of olives present on the tree.
For the management of the soil, the grassing technique is preferable to processing, so as to favor the presence of beneficial insects.
Furthermore, olive tree pruning must not be too intense in areas at risk of attack. This is because, otherwise, the few olives on the tree, in the season following pruning, are exposed to a greater possibility of infestation.
Pruning, therefore, must always be balanced, to meet both the production needs and those of pest defense.
Totally omitting the use of chemical control, whose effects are pejorative on the entire ecosystem treated, it is appropriate to focus on biological control.
The fight against the olive moth is carried out with the use of bacillus thuringiensis, which is allowed in organic farming.
The most effective strains against this insect are Kurstaki and Aizawai.
It is usually not recommended to intervene on the antofoga generation of moth, unless the percentage of infested flowers is not higher than 45%.
It is the carpofoga generation that is the most harmful and against which action must be taken.
The intervention threshold, in this case, is set at 15% of the infested fruit. The best time to operate is that of the hatching of the eggs, when the small larvae have not yet entered the fruit.
Once inside, in fact, everything is ineffective, as Bacillus thuringiensis acts only by ingestion.