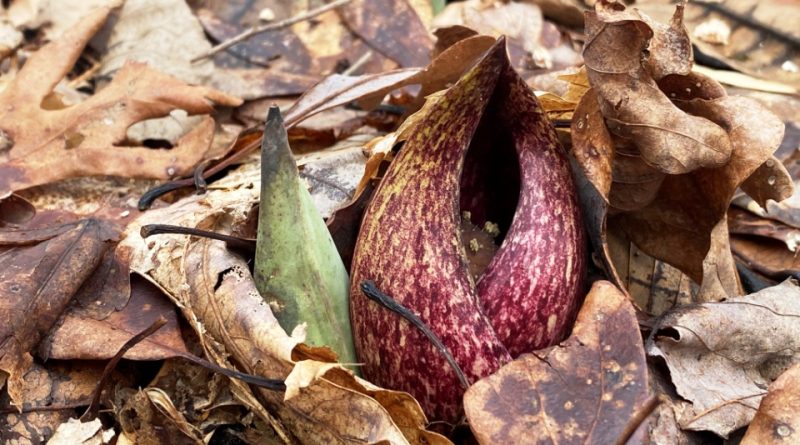 Etymology –
The term Symplocarpus comes from the Greek words symploke, which means connection, and karpos, which means fruit, referring to the ovaries that grow together to form a single fruit.
The specific epithet fetidus comes from foéteo, exhale stench: fetid, with an unpleasant, stinking, foul-smelling odor.

Geographic Distribution and Habitat –
Symplocarpus foetidus is a plant native to eastern North America, in an area ranging from Nova Scotia and southern Quebec in the west to Minnesota and south to North Carolina and Tennessee. It is also a protected species endangered in Tennessee.
Its habitat is that of the banks of streams, wet forests, peat bogs and wetlands such as swamps. 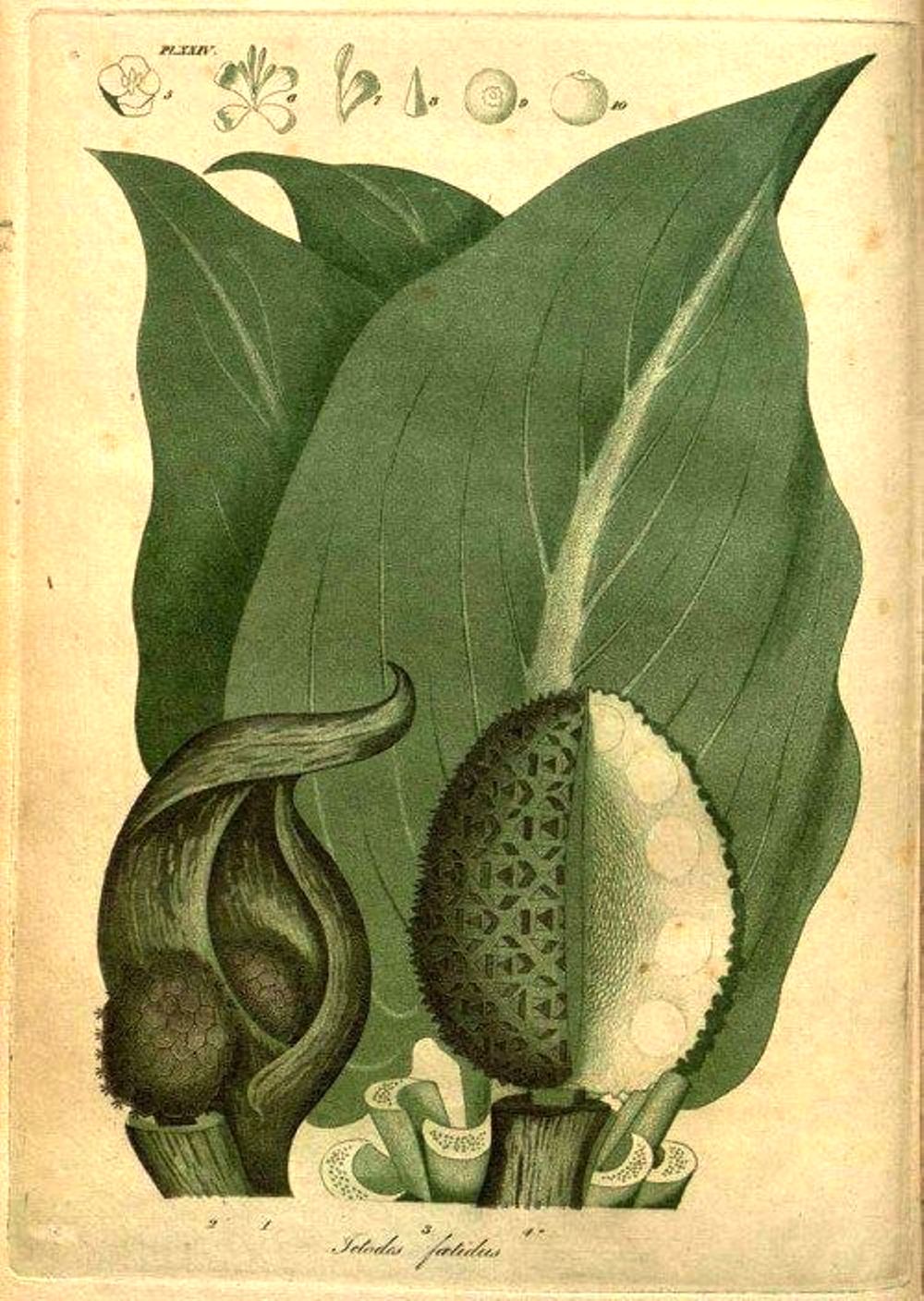 Description –
Symplocarpus foetidus is a herbaceous plant up to 50 cm tall, with a 30 cm thick rhizome.
It has large leaves, each 40–55 cm long and 30–40 cm wide.
The stems remain buried beneath the surface of the soil with the leaves emerging later.
In winter it is able to heat up to pierce the snow, since the spadix keeps its temperature around 20 ° C in the winter period when the air temperature is below zero, so it is a thermoregulatory plant, and for its heat production draws the fuel from the roots.
The flowers are produced on a 5–10 cm long spadix contained within a spathe, 10–15 cm high and mottled purple. The flowers, with a particularly intense smell, are hermaphrodites.
The flowering period is in early spring when only the flowers are visible above the mud.

Cultivation –
Symplocarpus foetidus is a plant that is harvested in nature for local use as a food, medicine and source of materials.
It is a plant that grows in the sun or in the shade in humid or peaty soils, free of limestone but rich in organic substance.
It is a very rustic plant that tolerates temperatures down to at least -35 ° C.
The plant can increase the temperature of its inflorescence by 15 – 35 ° C above the surrounding air temperature, thus protecting itself from frost and helping to attract pollinating insects.
Although it blooms while there is still snow and ice on the ground, it is successfully pollinated by the first insects that emerge even at this time. Some studies suggest that in addition to allowing the plant to grow in frozen ground, the heat it produces can help spread its smell into the air. Insects that feed on carrion, which are attracted to the smell, can be doubly encouraged to enter the spathe because it is warmer than the surrounding air, promoting pollination.
This plant has roots that contract after growing in the earth. This trick draws the stem of the plant deeper into the mud, so that the plant actually grows downwards, not upwards. Each year, the plant grows deeper into the earth, so older plants are virtually impossible to dig.
Propagation occurs by seed. The seed must be sown immediately, as soon as it is ripe, or stored in water if it is not sown immediately.
The stored seeds can be sown in late winter or early spring.
Sowing should be done in containers immersed in 2 cm of water to keep the compost moist. Germination should take place in the spring.
The transplant should be done in late spring when the plants are large enough.
It can also propagate by division, taking the parts while the plant is dormant.

Customs and Traditions –
Skunk cabbage is a plant whose leaves, when stepped on, emit a skunk-like odor and are foul-smelling even when in bloom. The plant is not poisonous to the touch. The bad smell attracts its pollinators, and the smell of the leaves can also serve to discourage large animals from disturbing or damaging this plant, which grows in the soils of wetlands. In addition to bees, some flies, such as Calliphora vomitoria, are known pollinators of this plant.
In the nineteenth century the US pharmacopoeia listed Symplocarpus foetidus as the drug “dracontium” which was used in the treatment of respiratory diseases, nervous disorders, rheumatism and dropsy.
In North America and Europe, Symplocarpus foetidus is occasionally grown in water gardens.
In the past this plant was used extensively as a medicinal plant, condiment, and magical talisman by various Native American tribes.
All parts of this plant, but especially the flowers, have a strong unpleasant odor.
Among the edible uses the cooked root is used.
The young leaves are eaten cooked and have a peppery flavor.
The leaves must be well cooked as this plant often contains calcium oxalate crystals and therefore is believed to have medium toxicity to humans. It seems that the toxicity is removed through careful preparation.
In the medicinal field, the plant was already widely used by native North American Indians, mainly for its expectorant and antispasmodic properties to treat bronchitis and asthmatic conditions, a use, however, still frequent in modern herbal medicine.
However, the plant should be used with some caution and preferably under the supervision of professionals. Handling fresh leaves can cause blistering of the skin while excessive doses of the root can cause nausea and vomiting, headaches and dizziness.
The root is antispasmodic, diaphoretic, diuretic, emetic, expectorant and slightly narcotic.
The epigeal part is harvested in late autumn or early spring and dried for later use but should not be stored for long as it loses its medicinal properties. It has been used internally in the treatment of respiratory and nervous disorders, including asthma, whooping cough, phlegm, bronchitis, and hay fever.
It is occasionally used to treat epilepsy, headaches, dizziness and rheumatic problems.
Externally it was used as a poultice for splinters and thorns, to heal wounds and to treat headaches.
Root hairs or rootlets were applied to the dental cavities to treat toothache.
From the hairs of the root a tea is obtained which has been used externally to stop bleeding.
An inhalation of the crushed leaves has been used in the treatment of headaches.
The bases of the leaves were applied as a moist dressing for bruises.
The powdered root was used as a detergent against sweat and bad smells.

Preparation Method –
Symplocarpus foetidus is a plant that, despite its unpleasant smell, has long been used especially by Native Americans where the plant grew.
Its use has been, especially in the past, both in the food and medicine fields.
Well-dried young leaves are good enough for making soups or stews. The well dried stems can be transformed into a pleasant cocoa-like flour.
To use the root, it must be carefully dried or cooked before being eaten, due to its possible toxicity.
Traditionally the root was dried for at least 5 weeks or boiled for 3 days before being eaten.
The cooking water of the leaves must also be changed at least once.
The epigeal part of the plant should be harvested in late autumn or early spring and dried for later use. However, it should not be kept for long because it loses its medicinal properties.