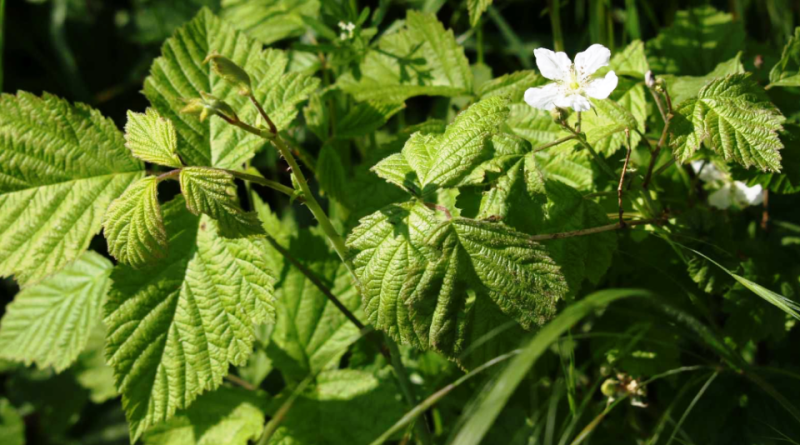 The bluish bramble (Rubus caesius L.) is a bushy species belonging to the Rosaceae family.

Geographic Distribution and Habitat –
Rubus caesius is a species of Eurasian origin widely distributed in most of Europe and Asia, from Ireland and Portugal, east through Russia to western Siberia and, through Turkey to Lebanon and Afghanistan. , to reach the far east of Xinjiang province in western China. This species has also naturalized to some extent in locations scattered throughout Argentina, Canada and the United States.
Its habitat is that of riparian woods, ravines, humidified wooded soils in humid and shady environments from sea level up to 1200 meters, rarely up to 2000 meters. It is also common in hedges and ruderal areas.
When it grows on abandoned crop fields, less hairiness is noted: the suckers can be hairless and the leaves without incisions. 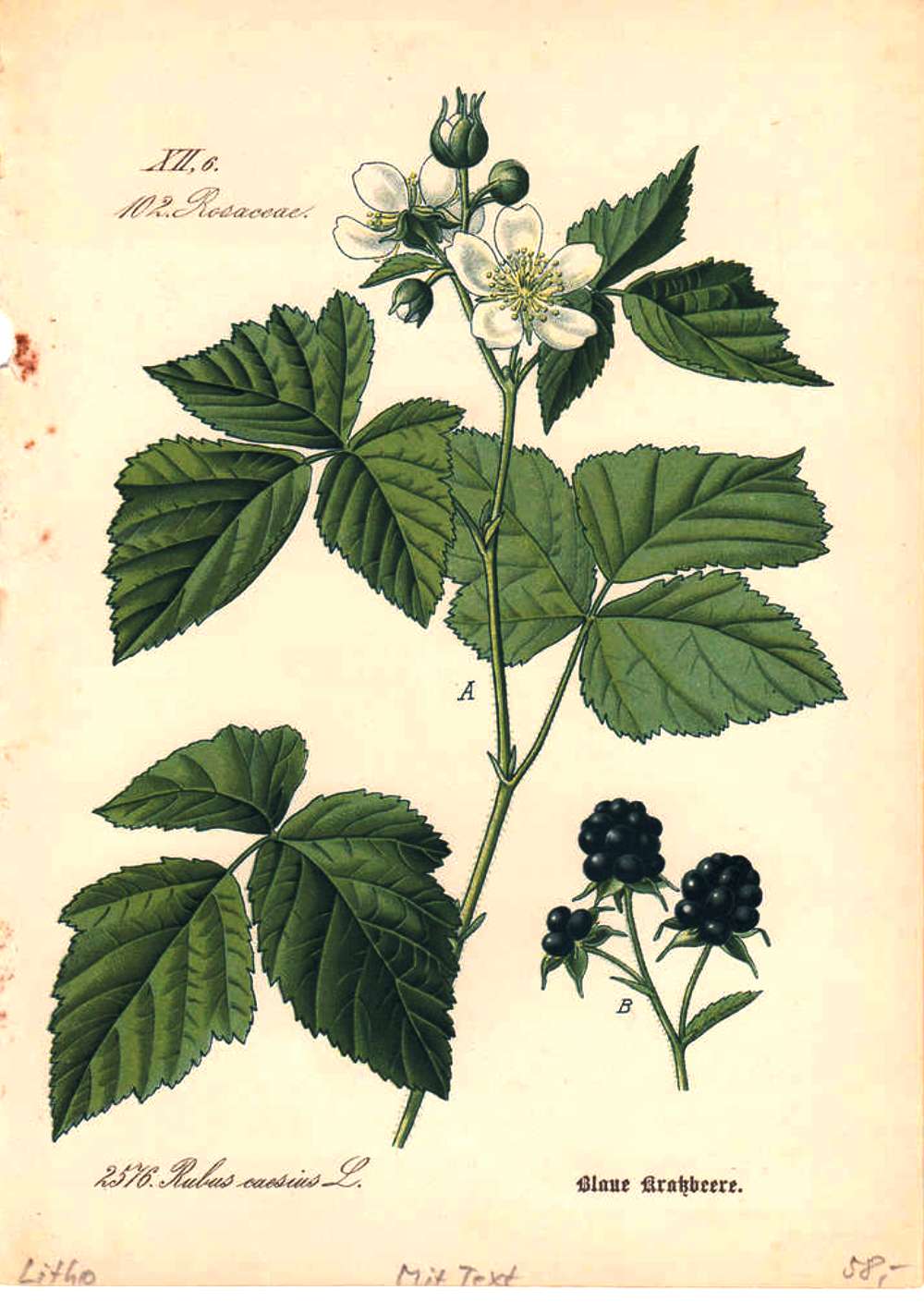 Description –
Rubus caesius is a deciduous and bushy perennial shrub, with a height of 50 – 150 cm, with woody, polloniferous, fasciculated root and with sarmentose glaucous-pruinose cylindrical suckers, 1-2 meters long, rooting at the apex, with thin 2 mm long, very acute bristle-shaped thorns.
The leaves are compound, palmate, with 3 segments from lanceolate to ovate 4-7 cm wide and 7-9 cm long, roughly toothed along the edge, acute, sometimes incised at the base; the leaves of the suckers have broadly lanceolate stipules, those of the flowering stems have narrower stipules, all narrowed towards the base.
The flowers are gathered in corymbs of 2-5 elements with a densely glandular floral axis; hermaphroditic flower, actinomorphic, with 5 triangular-lesiniform sepals, 2-3 mm wide and 13 mm long, erect when fruiting; dialipetala corolla with 5 ovate white petals (7×10 mm); conical receptacle, semi-inferior ovary, apocarpic, many carpels and many stamens.
The multiple fruit is a stone fruit (polidrupa) an aggregate of 8-10 (20) small drupes dehiscing with the receptacle. Drupeole 3-5 mm in diameter, edible, with red exocarp, then bluish-black and pruinose, juicy mesocarp and woody endocarp (stone), kidney-shaped, 2.5-5.5 mm long, reticulated.

Cultivation –
The bluish bramble is a plant that can hybridize with raspberry (Rubus idaeus) and bramble (Rubus saxatilis) and generally grows in nature on basic and chalky soils.
The plant is harvested in nature for local use as a food. It is sometimes grown for its fruit, especially in the Caucasus, and has been used in plant breeding programs to instill greater frost tolerance.
It is an easily grown plant in good, well-drained clay soil in the sun or partial shade.
Propagation occurs by seed and requires stratification; it is best to sow in early autumn in an unheated seedbed.
Stored seed requires a month’s stratification at around 3 ° C and is best sown as early as possible during the year. The transplant in open field must be performed in the late spring of the following year.
It can be propagated by cuttings of semi-mature wood, in the period of mid-summer in a protected area.
Finally, it can also propagate by division in early spring or just before the leaves fall in autumn.

Customs and Traditions –
Rubus caesius has the same medicinal and culinary properties as the other Rubus, although the fruits are less sweet than those of the Rubus fruticosus group.
The fruits are succulent but not very tasty; they have a pleasantly sour taste; for some they are considered superior to common blackberries although the fruits are rather small and composed of few drupes.
The fruits can be used to make jellies, preserves, etc.
The young leaves are used as a substitute for tea.
The active ingredients are hydrolysable tannins and organic acids such as isocitric, malic and quinic acid.
It has aromatizing, astringent, diuretic and anti-inflammatory properties.
The leaves can be used internally as a decongestant and astringent action useful for soothing intestinal inflammation and normalizing its functions and externally decongestant and anti-inflammatory, useful for oral rinses in stomatitis, for gargling in pharyngitis, for compresses in haemorrhoidal disorders. In the past, to take advantage of the astringent action, especially for external use, it was also used the roots that were uprooted from the ground in autumn. The use of fruits to normalize the intestine and soothe hemorrhoids and fresh juice for rinsing and gargling in inflammations of the oral cavity has also fallen into disuse. However, the fruits enjoy a good thirst-quenching, refreshing and diuretic action.
The Romans chewed the leaves as an astringent for gum bleeding.
Other uses include agroforestry ones.
Most, if not all, grove-forming Rubus species have good erosion control value. They usually grow satisfactorily on dry, barren soils and invade and occupy eroded areas. They also quickly settle on burns, old fields and registered areas. Forming extensive and nearly impenetrable thickets, they can provide excellent coverage for wildlife and nesting sites for small birds. They are often natural pioneer species, paving the way for woodland development, but should only really be used within their native range to avoid any risk of invading other habitats.
Outside the Eurasian continent, this species has been of interest to plant growers in the United States since 1919, being prized for its tolerance to frost.
In addition, a dye ranging from purple to opaque blue is obtained from the fruit.

Preparation Method –
Rubus caesius is a plant that once found more use and use in both the medical and food fields.
Mainly fruits and leaves are used.
In the kitchen, the sprouts are suitable for soups, risottos, omelettes, or simply to be boiled and seasoned to taste. Blackberries are eaten plain or used for syrups, juices, jelly, jam, sauces, liqueurs, under grappa. Furthermore, crushed and left to ferment, they give an acidic drink of modest alcohol content which, by distillation, allows to obtain an excellent brandy.