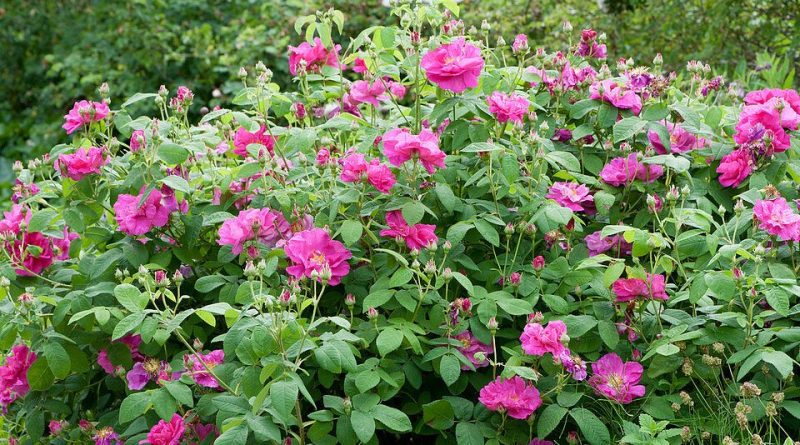 The Gallic rose, French rose, or Rose of Provins (Rosa gallica L.) is a shrub species belonging to the Rosaceae family.

Etymology –
The term rose is of uncertain nature, according to some it derives from the Latin “rosa” and this from the Greek “rhódon” = rose, according to A.A. it would derive from the Sanskrit “vrad o vrod“ = flexible with allusion to the flexibility of the branches or from the Celtic “rhood o rhuud” = red.
The specific Gallic epithet refers to Gaul, so called by Linnaeus who had examined a sample from France (Gaul).

Geographic Distribution and Habitat –
The Gallic rose is a plant present in temperate Europe, from France to Ukraine and is therefore a species with an area centered around the Black Sea (steppe continental climate with cold winters, hot summers and always very scarce rainfall).
Its typical habitat is that of the edges of thermophilic woods, dry escarpments, mesophilic pastures, from 0 to 800 m a.s.l., generally on calcareous soils, where it forms small colonies thanks to the underground rhizomes. 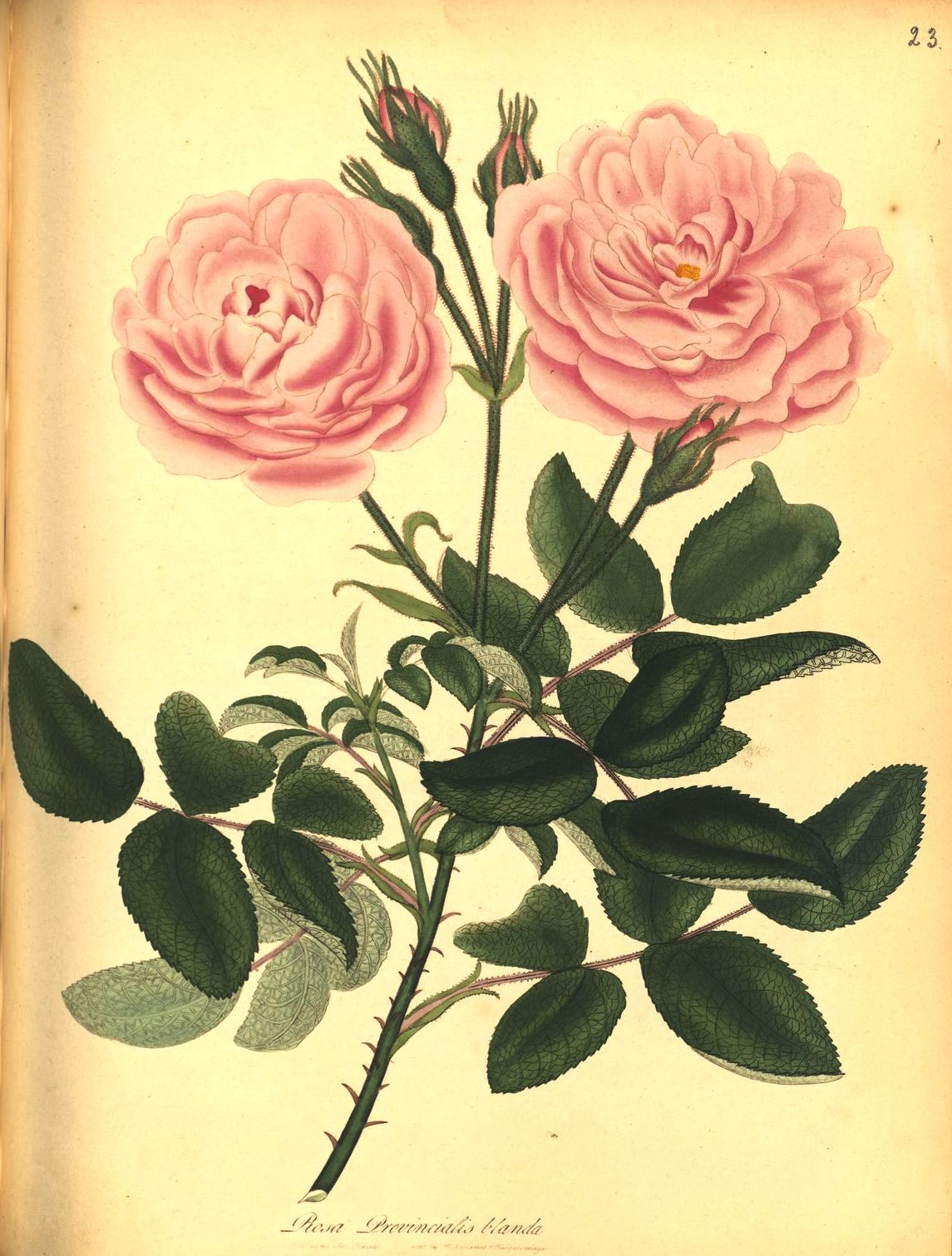 Description –
The Gallic rose is a bushy, woody, rhizomatous shrub, which has erect and robust stems, green or reddish in color, which grows between 30 and 80 cm in height.
It has 4 different types of quills (heterologous thorniness) on the stem and lateral branches: spines bent in the shape of a sickle, acicular, bristly and glandular-stipitate.
The leaves are alternate and imparipinnate; they have 5 (7) leaflets which partly persist even in winter. At the base of the petiole dentate and glandular stipules develop. The leaflets are oval or rounded, short and pointed, leathery, rigid with frequently glandular and ciliated teeth. They are opaque, with dark green and glabrous lamina in the upper part, whitish with simple and glandular hairs in the lower part; the leaf vein is raised.
The mostly single flowers, rarely 2 ÷ 4, are carried by about 3 cm peduncles, rich in glandular bristles, have a diameter of 6 ÷ 9 cm, are strongly odorous, from light red to dark purple; Slightly convex or conical disc receptacle with thin orifice (stylus channel). The sepals are pinnate-laciniated with glandular hairs, after anthesis, folded over the peduncle and caduchi.
The fruits are spherical, leathery, red when ripe rose hips, sprinkled with glandular-stipitate bristles.

Cultivation –
The Gallic rose is a plant grown to create shrub and decorative paths. The plant needs fertile and well-drained soil. It can grow in full sun or partial shade. The cultivation needs of this rose are similar to the others. In fact, the plant shares common characteristics, including the formation of basal suckers. However, the Gallic rose is a very resistant and easy to grow species. Its care poses no particular problems for gardening enthusiasts.
As for the precautions that the plant needs, it can be said that it has no particular needs. Regarding irrigation, it is not such a frequent operation to do.
The propagation also occurs, usually by cuttings, in a very similar way to that for other species of roses.

Customs and Traditions –
Rosa gallica is one of the oldest and most popular roses over time. Its origins are truly ancestral.
It was already known even by Greeks and Romans, who appreciated its high ornamental value and of which some varieties are known.
At first, it was thought that the Gallic rose did not even belong to roses. Today it is known instead that it belongs to the vast family of rosaceae. The distrust of recognizing it as a rose depended on the shape of the flowers. Later, however, the Gallic rose was classified as a rose also identified with other names.
The history of roses is lost in the mists of time so it is often impossible to understand which species it referred to.
Roses were already important in antiquity, Confucius reports that rose gardens existed in China and Japan and a Chinese manuscript on these flowers dates back to 500 BC. C.
They were used in rituals, in the manufacture of cosmetics in perfumery and in the medical field. But the land of roses in antiquity was undoubtedly Persia where even the emperors were skilled gardeners.
The Assyrian-Babylonians cultivated roses in the magnificent hanging gardens of Babylon and became a symbol of state power, but they also appreciated the suppository with rose petals and turpentine used in the treatment of hemorrhoids.
Greeks, Romans and Persians used different species for therapeutic purposes, so much so that Pliny in 77 AD. he cited as many as 32 ailments that could be cured with Rose-based preparations.
But virtually endless legends and historical facts are linked to roses.
As for the Gallic Rose, its main constituents are: gallic and quercitannic acid, resin, tannin, cyanine, essential oil, vitamin C.
It is an aromatic, astringent, tonic herb with an antibacterial action.
It is used in medicine for internal use in case of colds, bronchial infections, gastritis, diarrhea,
The flower decoction can be useful in case of diarrhea. The infusion of whole fruits or dried pulp is drunk as tea, it facilitates digestion, it is astringent and deeply diuretic. The infusion based on achenes is indicated against kidney stones.
For external use in case of sore throat, eye irritation, small lesions and skin problems.
The infusion with the petals is used in the preparation of “pink honey”, used to relieve pain during early childhood teething.
But this rose is also used in the food sector.
In the kitchen, petals are used to add to salads and rose water is used as a flavoring in pastry, for desserts, sorbets, mousses and jellies. The petals can be candied and used in the preparation of syrups and preserves. The dried petals and buds are important ingredients of “ras-el-hanout”, a mixture of spices typical of North Africa.
Among other uses, it should be remembered that dried petals and buds are added to potpourri; the essence and rose water are used in bath preparations and body creams.

Preparation Method –
As mentioned, Rosa gallica is used both in the medicinal and food fields.
You can prepare decoctions of the flowers while the whole fruits or the dried pulp are drunk as tea.
Infusions based on achenes can be prepared.
Petal-based infusions can be prepared which are used in the preparation of “pink honey”.
In the kitchen, petals are used and added to salads while rose water is used as a flavoring in pastry, for desserts, sorbets, mousses and jellies.
The petals can be used to prepare candied fruit to be used in the preparation of syrups and preserves; moreover, dried petals and buds are important ingredients of “ras-el-hanout”.
Finally, the dried petals and buds are added to the potpourri while the essence and rose water are the basis of baths and creams.