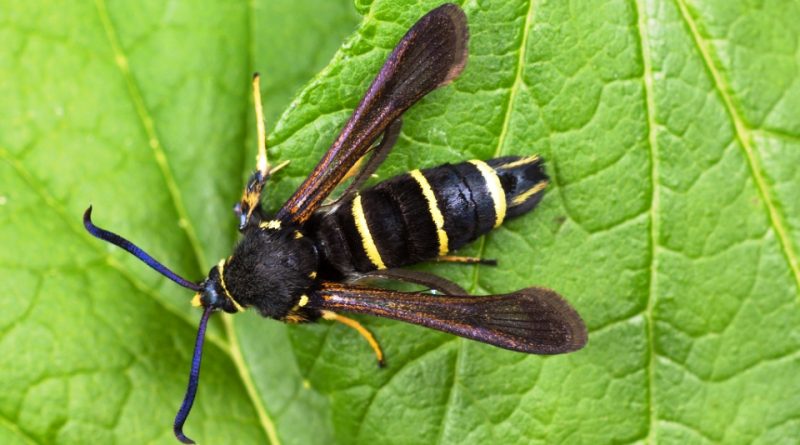 Geographic Distribution and Habitat –
Paranthrene tabaniformis is an insect that frequents a large range and is present and widespread in Europe, North Africa, Asia and North America.
It is present in Italy where it is widely spread.
This moth lives at the expense of some host plants including Poplar, Willow and Birch, being one of the most dangerous pests due to the damage caused by the larvae that dig tunnels in the wood.

Morphology –
The dusky clearwing, in the adult stage, resembles the Hymenoptera Vespoidei, hence the name of wasp.
Adults have a wingspan of about 20-35 mm with a blackish body. the abdomen has typical yellowish annular bands, with a tuft of dark hair in its distal part.
The front wings (which on the whole differ from the typical wings of the Lepidoptera to resemble the Vespoids) are covered with weak brownish scales, have an almost transparent appearance, while the rear wings are completely transparent.
The larvae are whitish in color, 25-35 mm long when ripe and with a reddish-brown head. From the abdomen, at the last tergite, two small spines protrude.

Attitude and Life Cycle –
The biological cycle of Paranthrene tabaniformis is completed in one or two years, depending on the climatic conditions; the insect overwinters in the larva stage, more or less mature, inside the tunnels dug into the wood.
It has a rather large period of flickering which goes from the beginning of May to the end of July and, in some cases, even beyond. The peak of the flickers is however around the middle of June.
After mating of the adults, oviposition occurs at the base of the leaves, on the shoots or in the cracks in the rind; the deposition takes place more frequently on the less vital or damaged shoots.
After about a week, the larvae are born which immediately begin to dig small subcortical tunnels, reaching, later on, the medulla. With the arrival of the adverse season, the larvae close the tunnels with rosure and overwinter. The activity is resumed in the following spring to flicker from May to the end of summer.
Due to the long period of flicker, full generations can be had in one or two years.

Ecological Role –
The dusky clearwing can cause, in conditions of high number of populations, damage to plants, especially poplar or willow, determined by the larval stages that dig tunnels in the medullary area, especially of the young asters in the nursery; however the damage also occurs in the poplar groves on the branches and on the young branches which break easily due to the action of the phytophagous.
Among other things, the flickering occurred and the intensity of the presences can be noted for the residues left by the chrysalises half inside and half outside the exit holes of the tunnels.
Furthermore, the plant, at the point of entry of the larva, reacts with a typical swelling; in fact the larva before reaching the medulla digs the subcortical galleries that determine these reactions.
The lesions and tunnels produced by this phytophagus cause, in addition to the direct damage described, also indirect damage including the weakening of the plant, greater receptivity to wound pathogens such as caries and bark cancer, particularly favored by open wounds.
Before addressing the topic relating to the phytosanitary defense against this insect, it is useful to know that this moth is in a biocoenosis relationship with some antagonists; among these we remember:
– Leskia aurea: Diptera Larvevoride, parasitoid of larvae;
– Hymenoptera such as: Bracon fulvus, Ephialtes abbreviatus, Apanteles parasitella;
– birds, especially Woodpeckers; these are excellent predators of larvae.
It is also interesting the possibility of using nematodes which under certain conditions can become applicative.
However, the biological control against Paranthrene tabaniformis needs to be further developed. biological formulations are currently being tested with the Beauveria bassiana mushroom or with Nematodes of the genus Neoaplectana, injected into the tunnel or distributed on the woody organs.
In the case of intervention with synthetic chemicals, it is necessary to carefully evaluate the long period of flickering which becomes very important to know the moment of maximum presence (maximum oviposition).
To this end it is essential to carry out a population census; in this sense you can use:
– monitoring traps with sex pheromone; the traps should be installed in mid-May; they are mainly used to establish flickering “peaks”. However, in the nursery, an environment in which the damage is more serious, an intervention threshold has been established which corresponds to 10-15 adults captured per trap per week; in this case it is about 15-20 days after the threshold is exceeded, trying to avoid too early treatments.
– sampling of the larvettes: in this case the treatment is carried out at the first appearance of the larvettes, when they are still in the underbelly.
In the case of minimum suitable conditions (not coinciding with the presence of pollinators and other entomofauna and useful fauna), 2-3 treatments can be carried out every 10-15 days, one from the other. In these cases it is advisable to use microencapsulated insecticides which allow, depending on the slow release of the active ingredient and the consequent longer persistence time, to reduce the number of treatments while always keeping the plants protected.
For ornamental poplars or in the case of not widespread attacks, it is possible to fight the insect by blowing insecticidal substances (in solution or as gas) into the tunnels.