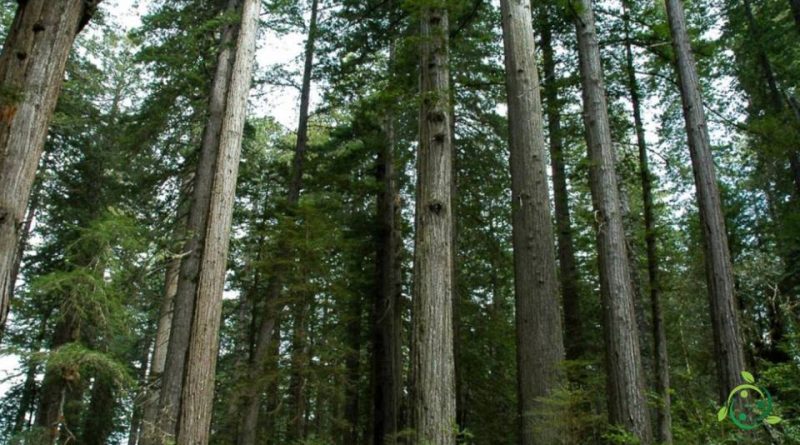 The coast redwood or coastal redwood or California redwood (Sequoia sempervirens, Don, Endlicher, 1847) is a tree of the Cupressaceae family native to the western area of ​​North America.

Suitable breeding habitat –
Sequoia sempervirens is a large tree native to North America where it grows spontaneously along a narrow coastal strip between California and Oregon. Most of the sequoias are located within Redwood National Park and Yosemite National Park.
Before the glaciations, sequoias, or very similar trees, existed in Europe as well. It was reintroduced in Europe in the first half of the 19th century for ornamental purposes, but in this short period of time the redwoods introduced in Europe, with no more than 100-150 years of life, reached a maximum height of 40-50 m.
In nature it grows spontaneously along the coastal strip that goes from California to Oregon, within a radius of 60 km from the Pacific Ocean where the plant in fact prefers a type of temperate oceanic climate rich in humidity; moreover it does not tolerate continental climates and too rigid temperatures. It is widespread up to altitudes of 1,000 m above sea level, but generally grows at altitudes below 300 m. Redwoods prefer alluvial soils where they form pure or mixed forests with other local conifer species such as Pseudotsuga menziesii and Picea sitchensis.

Propagation –
The coast redwood is a plant that requires an oceanic, rainy climate with mild and snowy winters; does not like too cold continental climates.
It was introduced in Europe in the mid-nineteenth century where the plants do not exceed 40-50 m. In the areas of origin it can instead reach considerable heights (up to 110 m).
It is in fact the tallest plant species in the world (it can exceed 100 m in height), and it is also one of the longest-lived, being able to live over 2,000 years.
Redwoods grow well in deep, moist, well-drained soils in sheltered locations. Sequoia sempervirens tolerates completely shaded locations more than the other species, but grows faster in the sun. They are planted in autumn or spring. The soil is kept moist; in the first years after the “planting”, in March-April a layer of soil of leaves is distributed, to favor the humidity of the soil.
As far as propagation is concerned, this can take place by seed.
Sowing should be done in early spring in a cold seedbed or in light shade. The seed can also be sown as soon as it is ripe in a greenhouse. Germination rates are generally very low.
The transplant is then carried out in late spring or early summer. Plants will require some protection from the cold and spring frosts for their first two winters.
If sufficient seeds are available, they can be sown in a slightly shaded outdoor bed in early spring.
Propagation can also take place by cuttings.
It starts with semi-mature wood cuttings, taken from mid-summer to early autumn and placed in a cold greenhouse. These form roots in winter or early spring. Once the root system has been formed, they should be placed in individual pots and then transplanted in the summer if they are growing well. Otherwise they must be kept in the greenhouse for the first winter and transplanted at the beginning of the following summer.

Ecology –
Sequoia sempervirens, in its natural habitat, grows in a maritime Mediterranean climate, where winters are cool and rainy and summers are dry. Average precipitation is 180 cm, with 90 percent falling between October and May.
Dry summers are mitigated by a dense belt of fog. The fog is reduced, decreasing the drought stress of this hydrophilic plant due to evapotranspiration.
There is currently a lot of debate about the link between the fog belt area and the redwood distribution.
Favorite sites for redwood settlements are alluvial deposits, coastal plains, and areas along large streams.
The size of a sequoia seems to be linked to the soil and climatic characteristics of the site.
From an altimetric point of view, the sequoia is found at altitudes ranging from sea level up to 915 m, but most of the populations are located between 100 and 703 m. s.l.m ..
Redwoods are sensitive to saltiness and usually grow detached from the coast and protected by intermediate meadows.
The coast redwood has a strong affinity for deep and humid soils and prefers sandstone matrices.
It grows in formation with other plants including: Picea sitchensis, Taxus brevifolia, Torreya californica, Cupressus goveniana, Pinus muricata, Pinus radiata, Acer macrophyllum, Quercus garryana and Fraxinus latifolia.
Undergrowth plants are normally: Acer circenatum, Rhamnus purshiana, Vaccinium ovatum, Rhododendron macrophyllum, Rubus spectabilis and Ceanothus velutinus.