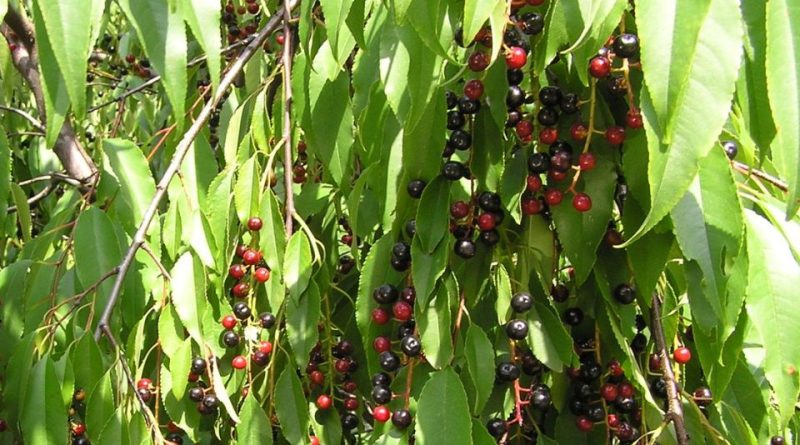 Etymology –
The term Prunus comes from prunus, in Pliny, Latinization of the Greek προῦμνη proúmne plum, plum in Theophrastus and Dioscorides, probably derived from a pre-Greek language of Asia Minor, see also prunum plum, plum from the Greek προῦνον proúnon in Galen.
The specific epithet serotina means late, evening, which produces fruit late (from the adverb sērō late): which sprouts or blooms or bears fruit late in the season.

Geographic Distribution and Habitat –
The black cherry is a plant native to eastern North America, in an area that extends from Canada through the eastern United States to Texas and central Florida, with separate populations in Arizona, New Mexico and the mountains of Mexico. and Guatemala, in an altitude range that reaches 2,600 m asl in Mexico.
The species was imported to Europe as early as the mid-17th century, where it was widely used as an ornamental tree starting from the mid-20th century, and in some areas it has naturalized becoming invasive.
In Italy it was already mentioned at the beginning of the nineteenth century in the catalogs of the Garden of S. Sebastiano da Po (TO) and in the catalog of the Botanical Garden of Turin.
Its habitat is that of the edges or the interior of lowland woods and colonizes meadows, uncultivated areas and heaths, in a variety of soils, preferring fertile and humid conditions on north or east-facing slopes or protected inlets. below the lower mountain belt. 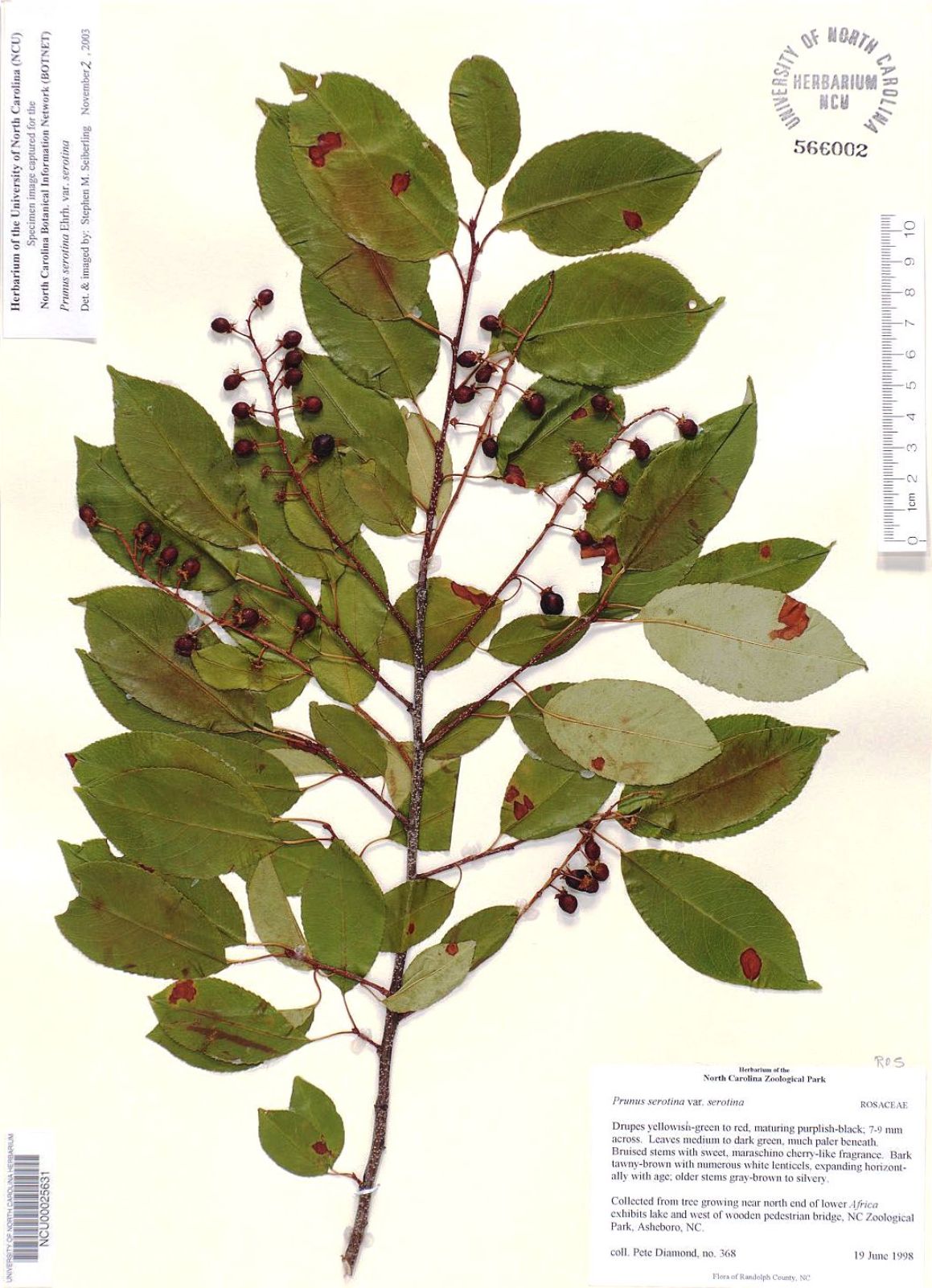 Description –
Prunus serotina is a fast growing medium sized tree reaching a height of 15–24 m. for the first ten years or so of life this plant has a thin, smooth and banded bark, similar to a birch; in mature trees this becomes engraved with a dark gray to black color.
The leaves are 5-13 cm long, ovate-lanceolate in shape, with finely toothed margins. The color of the autumn leaves ranges from yellow to red.
The flowers are small, white and with 5 petals, in 10–15 cm long racemes containing several dozen flowers.
The flowering period is between April and June.
The fruits are 6-8 mm drupes, subspherical, glabrous, red then blackish when ripe, without bloom, with narrow and fleshy mesocarp, dark purple, sweet, woody endocarp, ovoid, smooth, with a large rib.

Cultivation –
Prunus serotina is a plant, in the form of a shrub or tree, which is used spontaneously or cultivated for local use as a food, medicine and source of materials. The tree is believed to produce one of North America’s most prized furniture and cabinet woods, and is highly prized and widely used for items such as furniture and cabinetry. The plant is sometimes grown as an ornamental.
It is a fast growing plant, with persistence in shady sites, a hermaphroditic reproductive system, high seed production and the ability to disperse its seeds through avian and mammalian vectors.
In several northern and central European countries it has become invasive, reducing the biodiversity of indigenous forest stands and hindering forest production.
For its cultivation it requires a soil that retains moisture and well drained in a warm and sunny position.
From the pedological point of view it adapts to chalky and calcareous or chalky soils but with not too high contents.
It is a plant that produces abundant flowering, especially when grown in full sun.
In nature the tree begins to bear fruit at the age of about 10 and then continues for about 100 years, bearing fruit well for most years.
This species develops a long taproot root when young, which makes transplanting difficult, so it is advisable to plant them directly in the open field or to transplant them at a young age.
Propagation can occur by seed. It requires 2 – 3 months of cold stratification and it is best to sow in an unheated seedbed as soon as it is ripe.
The seed can be quite slow, sometimes taking 18 months to germinate.
It can also be propagated by cuttings from spring to early summer.

Customs and Traditions –
Prunus serotina is a plant that has been used for quite some time by the natives of its areas of origin for food, medicine or other uses. It was known as testacuahuitl in Nahuatl (Ancient language of the Aztec civilization, documented by numerous ideographic or hieroglyphic inscriptions, still spoken in some areas of Mexico and Central America) and was an important food in pre-Columbian Mexico. Native Americans ate the fruit.
The raw edible fruit is also made into jelly and the juice can be used as a drink mixer, hence the common name of “rum cherry”.
The seeds of this plant contain cyanogenic glycosides, compounds that can be converted into cyanide, such as amygdalin.
These compounds release hydrogen cyanide when the seed is ground or chopped, releasing enzymes.
These enzymes are: amygdalin beta-glucosidase, prunasin beta-glucosidase and mandelonitrile lyase.
Conversely, although the pulp of cherries also contains these compounds, it does not contain the enzymes needed to produce cyanide, so the pulp is safe to eat.
The leaves, when they dry out in particular, also contain cyanogenic glycosides, which convert into hydrocyanic acid if eaten by animals. For this reason it is recommended that farmers remove trees from fields where livestock graze, as dry leaves could poison the animals.
The presence of these substances can be noted for the almond smell they release when a young twig is cut or scratched, revealing small amounts of cyanide compounds that are produced and stored by the plant as a defense mechanism against herbivores and other predators.
In the food sector, fruits are eaten, both raw and cooked to prepare pies, jellies, stews, etc.
The fruits must be fully ripe otherwise they have a bitter taste. The best fruits have a thin skin and a juicy pulp with a pleasant vinous flavor.
The fruits can also be used as a flavoring in liqueurs and the flavor is better when the plant is grown in a sunny position.
The seed is sometimes eaten raw or cooked but should not be consumed if it is too bitter.
Drinks can be prepared with the infusion of twigs.
Extracts used commercially as flavorings in soft drinks, sweets, syrups and baked goods are obtained from the bark.
For medicinal use, “rum cherries” were used extensively in the traditional medicine of various native tribes of North American Indians who used it to treat a variety of ailments.
Currently it is little, if at all, used in modern herbal medicine.
The bark of the root, trunk and branches is antitussive, astringent, pectoral, sedative, stomachic, tonic.
The medicinal properties of this plant are destroyed by boiling, so the plant should only be left to infuse in warm water.
The root bark and the inner aromatic bark have expectorant and mild sedative properties, and a tea made from one of them was used to relieve pain in the early stages of labor.
This tea is also used in the treatment of fevers, colds, sore throats, diarrhea, etc.
From the inner bark a decoction is obtained which has been used in the treatment of laryngitis; in addition, the root bark has been used to wash old sores and ulcers.
The bark also contains the glycoside prunasin, which is converted in the digestive tract into highly toxic hydrogen cyanide.
This glycoside reaches its maximum concentration in the fall so the bark is harvested at this time and can be dried for later use.
In small quantities this extremely poisonous compound stimulates breathing, improves digestion and gives a sense of well-being.
The fruit, on the other hand, is astringent and has been used in the treatment of dysentery.
Other uses include forestry and the use of timber.
The tree is used for clearing debris areas of surface mines. The best results are obtained by planting 1 year old seedlings.
It is also planted for continental dune setting and as a competitor against grasses and heather in moorland afforestations.
Furthermore, Prunus serotina trees are sometimes planted as ornamental plants.
In Poland, it is sometimes planted in pine undergrowth and mixed coniferous forests to enrich biodiversity and improve soil conditions. However, as it later becomes an aggressive colonizer, it tends to decrease biodiversity in the long run.
Also in Italy, at the beginning of the 20th century, it was used in experimental silvicultural plants near Gallarate and from there it quickly spread to Lombardy and Piedmont; today it is reported as an adventitious in many regions of northern Italy and in Tuscany.
Among others, it should be remembered that a green dye can be obtained from the leaves, while a dark gray to green dye can be obtained from the fruit.
The wood is reddish-brown in color, it is dense and straight-grained, light, robust, rather hard, very resistant to impact. It folds and works well, finishes well, glues well, cures well, shrinks moderately and is moderately free from marks and warping.
It is highly valued for its fine grain and deep, warm reddish brown color, it is widely used for furniture, cabinet making, musical instruments, building interior finishes, etc.
Prunus serotina wood is perhaps the premier cabinet-making lumber in the United States and traded as “cherry”.

Preparation Method –
The black cherryis a plant of which almost everything is used, both for food, medicinal and industrial use and also as a valuable construction material.
In the medicinal field, the bark is mainly used, which is harvested in autumn and must not be stored for more than a year as it quickly loses its medicinal properties. Young and thin bark is preferred.
The fruit is suitable, in addition to fresh consumption, for the preparation of jams and in America it is used to flavor liqueurs, soft drinks and ice cream.
Wood is used as a fuel for smoking food and for the construction of fine furniture.