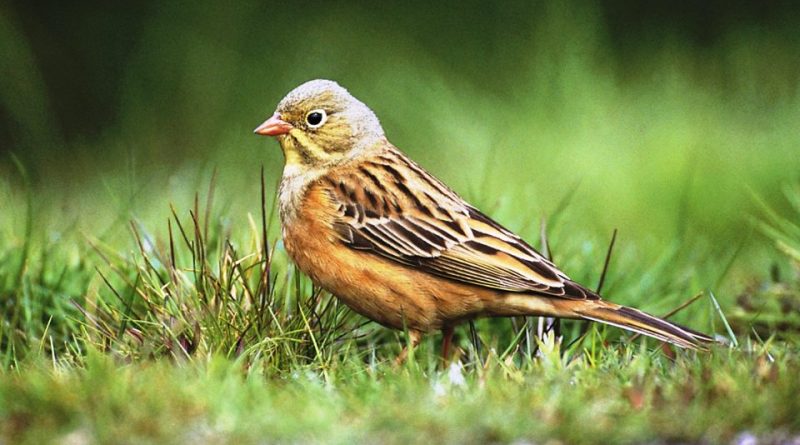 The ortolan bunting (Emberiza hortulana Linnaeus, 1758) is a bird belonging to the Emberizidae family.

Geographic Distribution and Habitat –
The Emberiza hortulana is a bird whose distribution range covers the Palearctic eco-zone; then Europe, Asia and Northern Africa. A large part of the population is found in Turkey and Russia (together they host 90% of the continental one), Poland, Romania, Spain.
In Europe its range goes from latitude 66 ° north to the Mediterranean basin, approximately it is included in the area affected by the July isotherm of 15/30 °; it is not present as a breeder in the British Isles, Iceland and other Mediterranean islands, with rare exceptions.
It is a trans-Saharan migratory species, as in the winter season starting from the period between the end of August and mid-September it migrates to sub-Saharan Africa and India where it moves for wintering. In the warmer season, on the other hand, it can be found in Europe, and in the isothermal regions of the northern hemisphere, such as North Africa and Asia Minor, where it generally arrives in the month of May.
In Italy, the Emberiza hortulana behaves as a summer and also an irregular winter visitor, where specimens that also spend the winter are rarely found, as occurred in Sicily. The species reproduces irregularly between the regions of northern and central Italy where it appears up to Molise and northern Campania. On the other hand, there are sporadic and limited presences in the most suitable mountain locations in western Basilicata and Calabria.
As far as its habitat is concerned, it is vast but it is a species that prefers plains, even moderately rocky, and open areas with possible presence of thickets and bushy stretches. We also find it in alluvial deposits, gorges, ravines and steep slopes. It also frequents areas cultivated by man, except those characterized by intensive agriculture.
In general, it prefers warm and dry environments and on the mountainous reliefs it settles preferentially on the southern side. It occupies a very wide altitude range ranging from sea level up to 2000 m a.s.l. 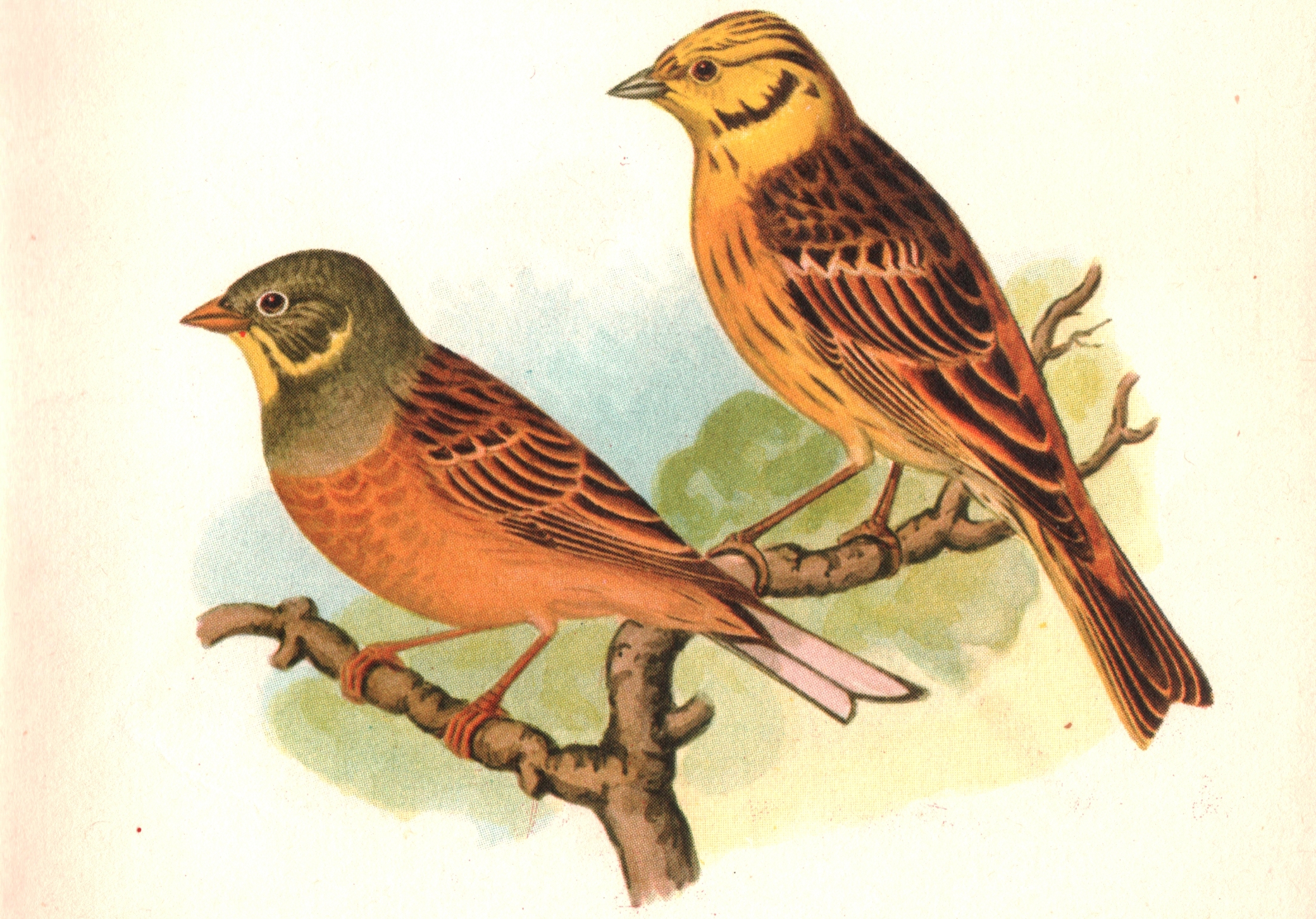 Description –
The ortolan bunting is a small passerine bird as it has a length of 15 – 17 cm, weighing about 25 grams.
It has a wingspan of 24 – 27 cm.
It has nine primary flight feathers, with the tenth not very developed and difficult to distinguish from the primary coverts.
The beak is short and conical (9-13 mm), the tail (6.5 cm) slightly “V” notched in the terminal part.
The head and the upper part of the chest are olive green with a throat, periophthalmic ring (eyelid ring) and yellowish mustaches while the beak is pink.
The upper part is brown in color, variously shaded, with blackish streaks, the rump and the upper part of the tail are yellowish brown streaked with brown. The coxswain, on the other hand, appears brown-black with central feathers edged with chestnut and the outer pair partially edged in white. The lower part is distinguished by a reddish brown color and pale yellow axillary areas.
Compared to other Zigoli it has the lower parts of a tawny-pink color and a yellow throat.
The young specimens lack greenish tones; they have reddish brown upper parts with widespread blackish brown streaks.
Underneath they have throat and chest of a yellowish color and streaked with blackish; remaining dirty-white undersides suffused with reddish; striated hips. Pinkish brown beak, conical and pointed with little accentuated “palatal tooth”. Paws pinkish brown, thin and equipped with somewhat curved claws.
It has a sexual dimorphism with the adult female having more brownish upper parts and little or no green on the head. In addition, the green is also missing on the neck and upper chest, which are streaked with blackish brown. Underparts warm brown to faded reddish brown with blackish brown streaks.
The Emberiza hortulana is recognized for having an agile and elaborate flight when traveling over short distances; sustained and slightly wavy on longer routes.

Biology –
The Emberiza hortulana builds nests and feeds on the ground (sometimes preferring the shelter of the vegetation), but it is also found humming on rocks, shrubs and sometimes on the tops of trees.
The nest is built by the female, and the male merely observes and follows her. The location varies, depending on the habitat chosen for breeding. In the bare ground, the nest is built in small depressions, which will then be covered with dry herbs, while inside there are age padding and vegetable hair. On the other hand, in cultivated land, it is built at the foot of plants that offer shelter.
Most of the individuals leave to nest in the month of May but others arrive in the milder regions even at the end of April. These regions are mainly represented by Europe, southern Siberia and northern Africa; it is noteworthy that this species sometimes goes as far as the Arctic Circle. The emigration exodus occurs in small groups generally composed of a few units up to about ten or in isolation, both in the twilight and in the diurnal hours with a clear preference for the first hours of the day; with the scorching sun the movement stops. The journey to the wintering places is sometimes made in conjunction with the Prispoloni, however, maintaining a clear specific distinction through homogeneous groups.

Ecological Role –
The ortolan bunting is a purely quiet and shy bird. The presence of this bird is perceived only with the song of the male during the reproductive period and subsequently it is difficult to identify as it takes refuge in the vegetation.
It is a bird that adapts quite well to captivity although, in the early days, its behavior becomes restless, which does not prevent it from eating very much, as most of these birds tend to put on a lot of weight, regardless of the size of the avian. that hosts them.
It is a basically granivorous bird, during nesting alongside a diet consisting largely of seeds and berries, insects and other invertebrates, whose larvae appear essential for the breeding of chicks. However, unlike the other passerines mentioned, this species is much more selective regarding the seeds they feed on, preferring those of monocotyledonous plants. The bird shells the seeds with the help of the tongue and jaw muscles.
Unfortunately this species is in strong decline as a breeder, currently not due to the hunting pressure (protected bird, which in any case emigrates before the start of hunting), but to the intensification of agriculture which eliminates uncultivated areas such as groves and hedges; however, the decrease in reproductive success has not been ascertained.