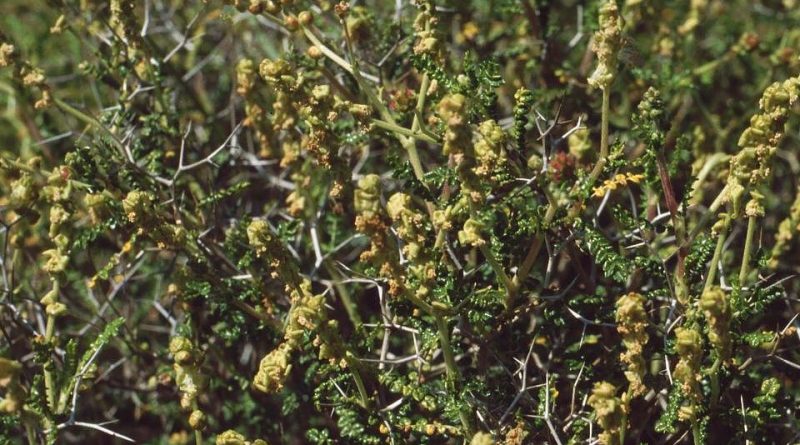 Etymology –
The term Sarcopoterium comes from the Greek σάρξ, σαρκός sárx, sarcόs carne and from Poterium (from the Greek ποτηρ, -ηρος to be able, -eros cup, cup, chalice: for the shape of the chalice).
The specific epithet spinosum comes from spina spina: as a thorny species, covered with thorns.

Geographic Distribution and Habitat –
Sarcopoterium spinosum is a common plant in the southeastern Mediterranean region and the Middle East.
It is present from Italy to Greece, Tunisia, Libya, Turkey extending eastwards to Iran.
Its typical habitat is that of a characteristic form of low garrigue widespread in the south-eastern sector of the Mediterranean, dominated by thorny creeping shrubs, belonging to different genera such as Genista, Euphorbia, Centaurea, Anthyllis, Thymus, etc. its altimetric distribution ranges from 0 to 900 m. s.l.m .. 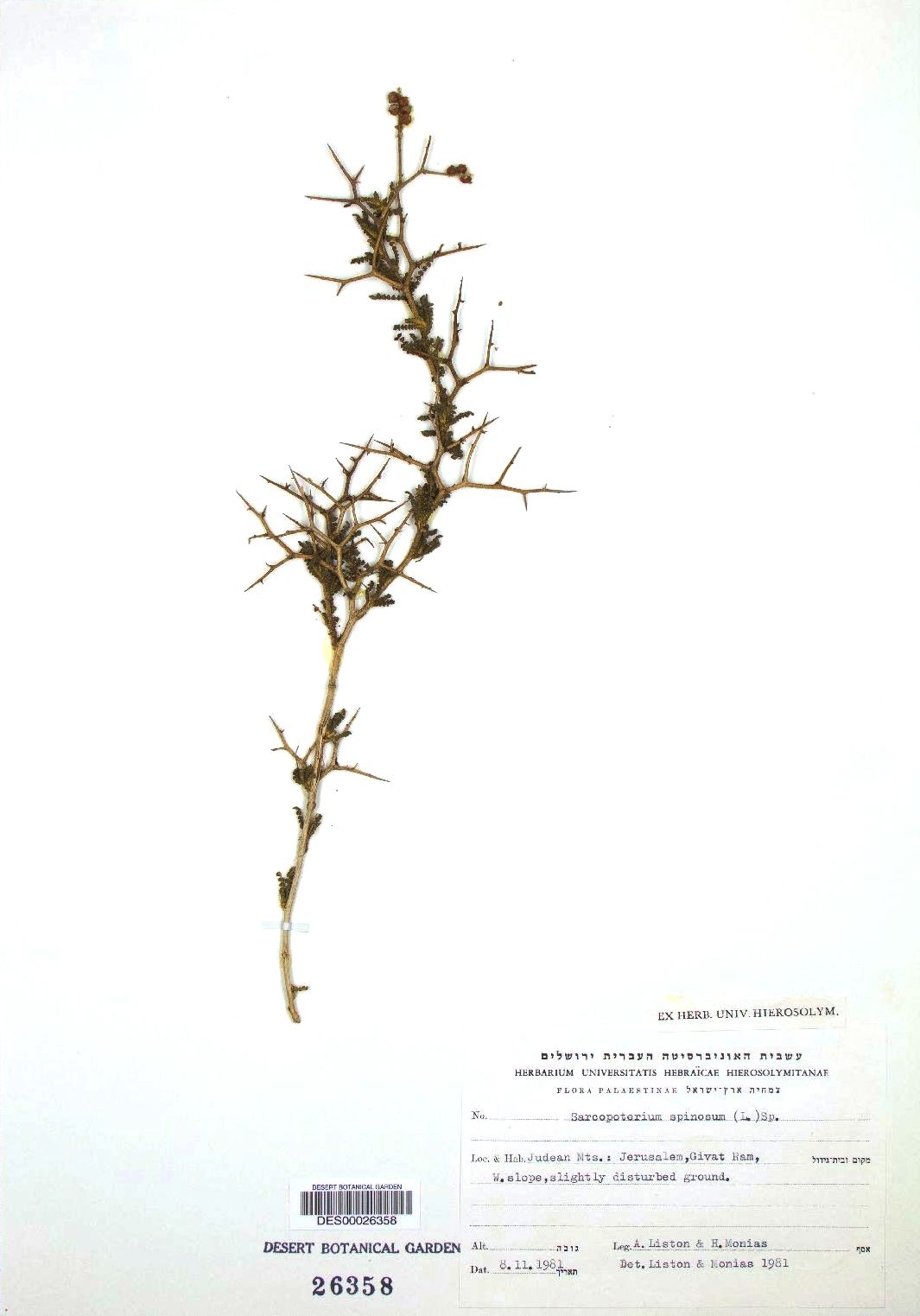 Description –
Sarcopoterium spinosum is a prostrate perennial bush, 3-6 dm tall, very branchy with young tomentose shoots.
The lateral branches are aphilous, with clear spines of 5-10 mm.
The leaves are imparipinnate to 9-15 oval segments (4-6 mm), hairy.
The flowers are small arranged in flower heads or short spikes (1-3 cm), the upper female, the lower male. The glass is greenish with 4 teeth. The stamens are 10-30.
The antesis is between February and May.
The fruits ripen in the fall.

Cultivation –
Sarcopoterium spinosum is a thorny bush whose fruits ripen in autumn, then fall to the ground to sprout with rainwater.
In summer, especially with high temperatures, it is dry.
This plant grows in a wide range of climatic conditions from the semi-arid ecotone between the Mediterranean and Iranian-Turanian vegetation zones to the sub-humid Mediterranean regions. The combination of the plant’s clonal and sexual reproduction contributes to its long-term survival and dominance.
It propagates by seed.

Customs and Traditions –
Some remains of Thorny Burnet were found near a wreck of a Roman ship. This finding suggested that the stems of this species were used in the construction of the bilge pump filters of ships, so it has been suggested that due to this use it was widespread beyond its original eastern range. In support of this hypothesis, there would be the frequent presence of S. spinosum in correspondence with port areas in the western limit of its range. This, for example, occurs in Italy (Calabria and Sardinia), where the species is found in isolated stations generally made up of small populations. This plant is also found in Sicily but with a less localized distribution, although restricted to the Hyblean area.
Sarcopoterium spinosum boasts ancient uses for medicinal use.
One of the most cited medicinal indications is the use of its root bark as a folk cure for diabetes and to dissolve kidney stones. Traditionally it is used as a tranquilizer and a potion made from its leaves is said to dispel fears. The green, salty and spicy leaves soaked in saliva are used to treat eye ailments and also as a good luck charm.
Five penta cyclic triterpenoids were determined within Sarcopoterium spinosum.
The extracts of the plant have been shown to be useful in the control of postprandial blood glucose, the effects of which are achieved mainly through the inhibition of carbohydrate metabolizing enzymes (amylase and glucosidase). Due to the mechanism involved in blood glucose control, such plant extracts are also expected to be useful in the management of obesity.
Among others, it should be remembered that the entire bush is used as fuel, to make fences and sheepfolds, to make brooms and as padding for mattresses.

Preparation Method –
Spinaporci is a plant that is used in the medicinal field using the bark of the roots to prepare decoctions against diabetes and to dissolve kidney stones. It has also traditionally been used as a tranquilizer.
The green, salty and spicy, saliva-soaked leaves were used to treat eye ailments