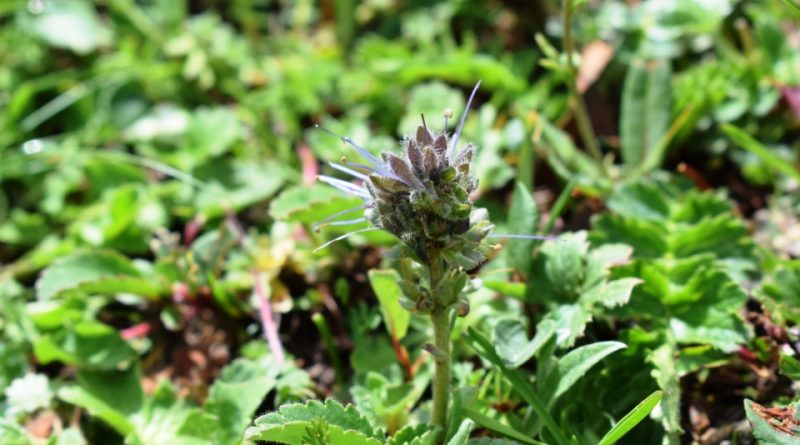 Etymology –
The term Picrorhiza derives from the two Greek words pikrós ‘bitter’ and ῥίζα “root”, in Latin -rhiza.
The specific kurroa epithet is of uncertain origin and most likely linked to the vernacular name of the plant.

Geographic Distribution and Habitat –
Picrorhiza kurroa is a plant native to the Himalayan region, present in an area ranging from Kashmir to Sikkim and Nepal, at an altitude between 3500 and 4800 m. s.l.m ..
Its habitat is that near springs on humid rocks, from the edge of the wood to high mountain environments where it prefers humid slopes, relatively less exposed, facing north-west.
There are two varieties of which the narrow-leaved variety is generally found in the higher region near springs, rocky ravines, steep slopes and on boulders; the broadleaf variety is found at relatively lower altitudes under shrubs with humid conditions and high humus content. 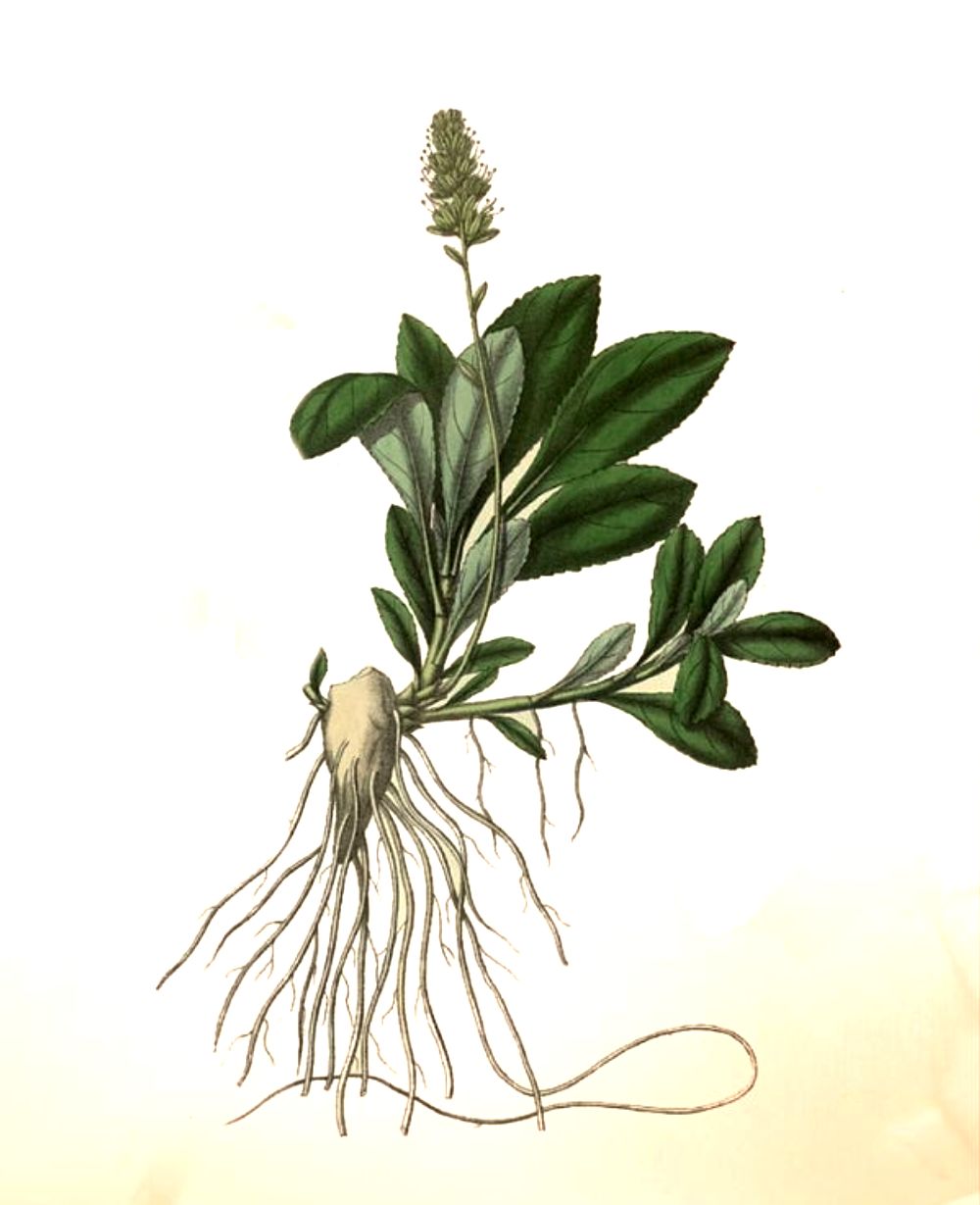 Description –
Picrorhiza kurroa is a small perennial herb that is formed from 15-25 cm long, articulated and zigzagging woody rhizomes, of a grayish-brown color, cylindrical, irregularly curved with branching and rooting at the nodes.
The leaves are 5-15 cm long, almost all at the base, often withered; they are roughly toothed, restricted to a winged petiole.
The flowers are small, pale blue or purplish, carried in cylindrical spikes, on erect almost bare stems; the flowers are about 8 mm, with 5 lobes in the center and with much longer stamens.
The antesis is between June and August.
The fruits are spherical bicellular capsules, creeping, erect when flowering, leafy and slightly hairy, 1.3 cm long.
The seeds are numerous and white in color.

Cultivation –
Katuka is a plant that grows well in cool, humid climates. It prefers clayey, sandy but porous soil to facilitate the horizontal spread of the underlying rhizomes, which produce aerial shoots from the nodes.
The plant prefers sufficiently humid and shaded places.
It is a high altitude plant that still manifests a strong mortality during prolonged and intense rains.
The plant can be propagated via seedlings but can also be propagated via both rhizomes and stolons.
The seeds can be collected in August-September for nursery breeding. The viability of the seeds is greater than 60% for a period of approximately six months.
The nursery beds are planted using rhizomes and stolons in the period of October-November.
The strain can be grown in plastic bags, Styrofoam trays or flower beds.
However, basement beds should be prepared in the nursery to conserve moisture during the water shortage period.
Each rhizome fragment must have two to three nodes intact for better settlement in the field and are also suitable for multiplication under controlled cultivation conditions with or without hormonal treatment.
The seeds can also be planted in pallets or plastic bags for germination. The seeds show no dormancy and germinate without any pretreatment.
However, seeds treated with 100 PPM and 200 PPM of GA3 (gibberellic acid) for 24 hours have a survival rate of 95% and 90%, respectively.
When the soil surface is covered with moss, the germination rate is maximized.
About 165,000 seedlings per hectare are recommended for cultivation, which means 1-1.5 kg of seeds are needed per hectare of land.
It has been found that rhizomes planted at a distance of 30 cm × 20 cm give the best results in terms of yield.
For cultivation the soil must be prepared with a tilling, made friable and porous by repeated plowing in order to facilitate the horizontal spreading of the underlying rhizomes.
The field is left open for a week for sunburn. To this is added some manure or well decomposed undergrowth bedding that must be mixed with the soil at a rate of 6 tons / hectare at least 15 days before transplanting.
For an optimal transplant, about 110,000 plants are needed and the transplant must be carried out at a distance of 20 cm × 30 or 30 cm × 30 cm. If agronomic practices are done correctly, plant density can increase up to 300,000 after the first growing season.
Picrorhiza kurroa is a plant that benefits from knowledge.
For example, intercropping with Foeniculum vulgare, potato and Digitalis purpurea can be implemented with some success, as these plants provide the microclimate for better growth, i.e. they retain moisture longer and provide shade for better growth of P. kurroa. .
However, potato intercropping requires special care when harvesting potatoes, as the plants can be uprooted in the process.
After harvesting the potato, hoeing is necessary followed by tamping the soil at the base of the plant.
In intercropping with F. vulgare and D. purpurea, these two species are planted at a distance of about 60 cm, and stolon cuttings of Picrorhiza species are transplanted at a distance of 30 cm × 30 cm between these plants.
To integrate the fertilizing components, urea can be used which should be administered at a concentration of 1.5% in the period of July and August to meet the needs of the plants.
In case of heavy rain, the soils should be drained by digging channels through the fields.
Please note that cultivation fields must be irrigated every other day during the summer and as needed during the winter. The fields must always be kept sufficiently moist.
Manual weeding is practiced for weeds, which must occur frequently at an interval of five to seven days during the first growing season. In the later stages, weeding is recommended together with hoeing at monthly intervals.
Among the diseases it is reported that at lower elevations (1800-2500m), plants become infected with powdery mildew during the initial growth period (March-May), which can be controlled by spraying Topsin-M (methyl thiophinate 0, 1%) approximately 15-20 days after starting, followed by another spraying after 15 days. Powdery mildew also appears after an excess of manure.
At the time of flowering and seed formation, spraying insecticide (ecalux, 0.5%) twice at 10-day intervals prevents seed loss from insects and aphids.
In the middle range, on the other hand, there is generally no incidence of various types of diseases but there is the possibility of mortality due to heavy rains during the rainy season.
As for the harvest, Picrorhiza kurroa has a life cycle of three years.
After the completion of flowering, fruiting begins in August and continues until September. The plant needs a year for the complete maturation of the seed.
The roots and rhizomes are harvested manually in September, when the shoots or aerial parts begin to wither and dry out.
Plants raised by cuttings mature almost a year earlier than those raised from seedlings.
However, to obtain higher active contents, the plants must be harvested before flowering takes place.
The roots and rhizomes should be dried in the shade and, after proper drying, the material should be packed in jute bags lined with polyethylene to ensure protection from moisture.
As far as yields are concerned, it is reported that the plant produces about 11 quintals / hectare of dry roots and rhizomes in the third year, when the crop is grown using rhizomes; however, 10-11 quintals / hectare of dry weight of roots and rhizomes are obtained in less time when the plant is propagated by means of stolons.
The yield is reduced to about 6 quintals / hectare when seeds are used as propagation material. The yield increases proportionally with elevation.
The cost of cultivation is high due to the high maintenance costs at higher altitudes.

Customs and Traditions –
Picrorhiza kurroa is one of the main income-generating non-wood forest products in the Nepalese Himalayan regions. It is one of the oldest medicinal plants traded in the Karnali area. Known as kutki or कुटकी in Nepali, it is a perennial herb and is used as a substitute for Indian gentian (Gentiana kurroo).
This plant is found away from inhabited communities which take hours or days to walk to its natural growth habitat.
This plant is a well known herb in the Ayurvedic medical system and has traditionally been used to treat liver and upper respiratory ailments, reduce fever, and treat dyspepsia, chronic diarrhea, and scorpion sting.
The active constituents are obtained from the root and rhizomes. The plant is self-healing, but unregulated over-harvesting has nearly led to extinction.
Current research on Picrorhiza kurroa has focused on its hepatoprotective, anticolestatic, antioxidant and immunomodulatory activity.
Among the therapeutic uses are the following: antipyretic, anthelmintic, carminative, stomachic, hepatoprotective, antimalarial and laxative in small doses but cathartic in large doses.
The plant helps to improve appetite and stimulate gastric secretions.
It is useful for asthma, colds and coughs and is also given for liver disorders, anemia and jaundice.
Among the chemical constituents contained in the rhizome there are: a bitter brown resinous glycoside, which contains two C-9 iridoid glycosides, picroside I and kutakoside, picrorizin, and a glycone, picrorizetina. The root contains the bitter kutkin principle, a non-bitter kurrin product, vanillic acid and kutkoli in varying amounts.
As for the conservation status of this plant, in 1997 it was listed in Appendix II of the Convention on International Trade in Endangered Species (CITES). This list ultimately resulted from a request from the Indian government. The main reason for listing was cited in the overexploitation of wild species for medicinal use. The species is not widely cultivated, although this has been discussed as a potential way to preserve wild populations, especially since the Dunagiri Foundation Trust, since 2014, has successfully created, implemented and employed protocols to produce it ethically and “Dunagiri Certified” export quality organic.

Preparation Method –
Picrorhiza kurroa is a plant used in its natural state or through cultivation and from which the roots and rhizomes are taken and collected manually in September, when the shoots or aerial parts begin to wither and dry out.
It is a herb that has long been known in the Ayurvedic medical system where it has traditionally been used to treat liver and upper respiratory disorders, reduce fever, and treat dyspepsia, chronic diarrhea, and scorpion sting.

One thought on “Picrorhiza kurroa”