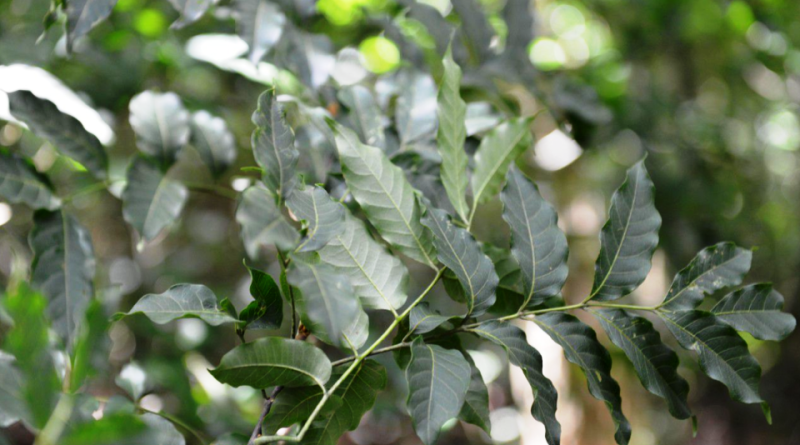 The Jamaican Quassia (Picrasma excelsa (Sw.) Planch.) Is an arboreal species belonging to the Simaroubaceae family.

Geographic Distribution and Habitat –
Picrasma excelsa is a plant native to an area ranging from the northern part of South America to Central America and the Caribbean.
The species is present in Cuba, the Dominican Republic, Haiti, Jamaica, Puerto Rico, Saint Vincent and the Grenadines and Venezuela.
Its habitat is that of hilly pastures, relict woods and along roadsides, in humid limestone tropical forests and near water sources at altitudes from 90 to 825 meters. 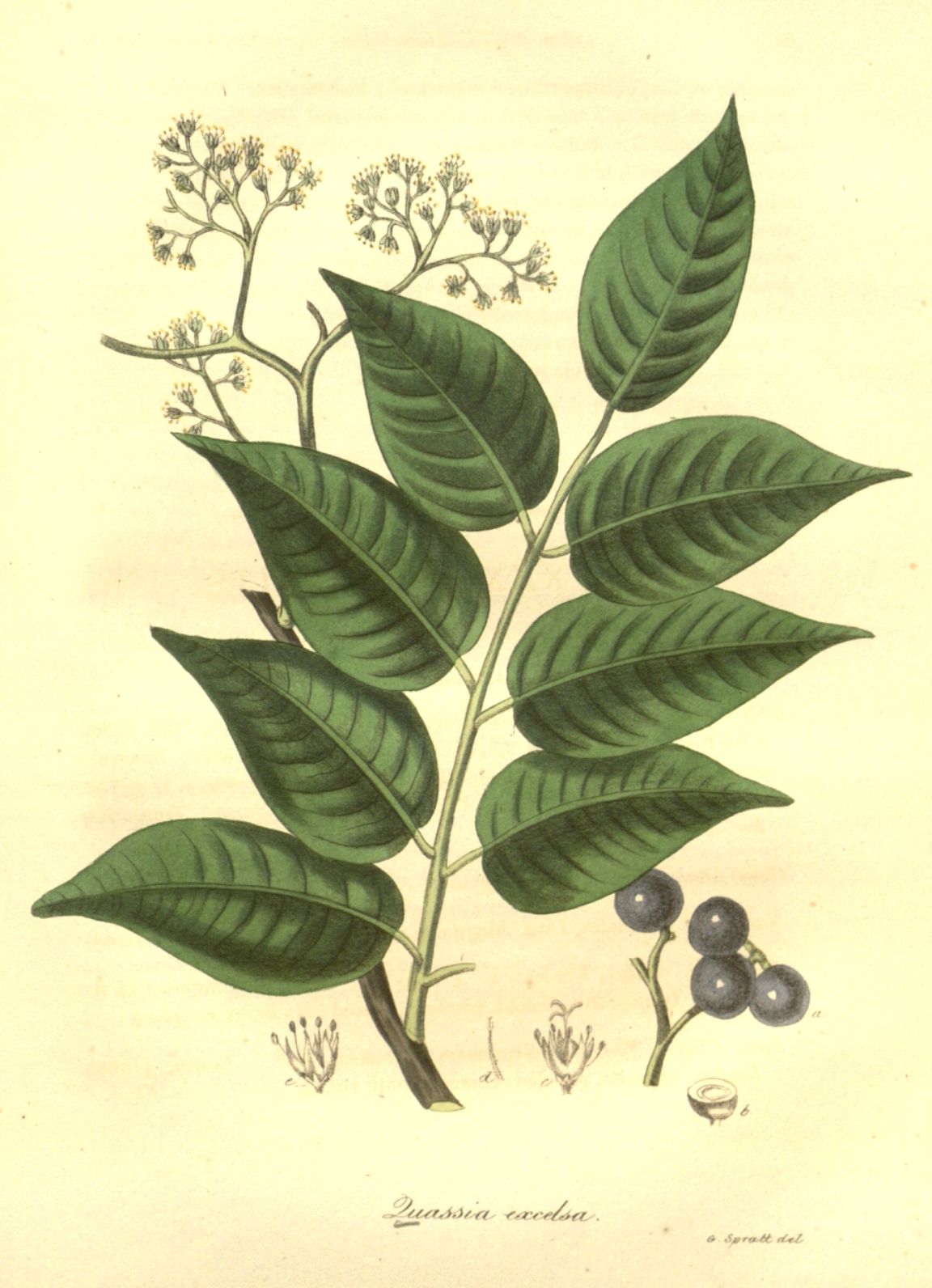 Description –
Picrasma excelsa is an evergreen tree that can reach up to 25 m in height, although it usually reaches 6 to 20 m in natural forests.
It has a slender trunk and a narrow crown with ascending branches, shaped by their proximity to other trees.
The leaves are large, 15 to 36 cm long and feathery, consisting of seven or thirteen strictly elliptical green leaflets, with prominent veins, arranged in pairs along the length and with an extra leaflet at the tip. These remain on the tree in all seasons.
The flowers are small and insignificant, greenish white, bisexual or male on the same tree and carried in small clusters that arise at the base of the leaf.
The anthesis takes place in the rainy season, which coincides with summer to autumn in its area of ​​origin.
The fertilized flowers produce round green fruits, about 0.5 cm in diameter, which when ripe are almost black in color with pulp surrounding a single seed.

Cultivation –
Jamaican quassia is a tree that grows wild and has been used for many hundreds of years by native peoples as a medicine and insecticide. Its use spread to the Western world in the 18th century and it is cultivated, mainly for medical use, in parts of South America.
The plant is threatened by deforestation and over-exploitation. It is classified as “vulnerable” on the IUCN Red List of Threatened Species.
However, birds eat the fruit and disperse the seed, which germinates easily in the sun or shade. This gives it the ability to regenerate in native forests and can make it a high-risk weed species in non-native areas.
The plant can be grown in fertile sandy soils that are rich in humus and retain moisture.
It grows naturally in moderately humid to very humid lowland and medium altitude tropical climates, generally in frost-free areas with annual lows 17 to 23 ° C, annual highs 26 to 33 ° C, annual rainfall 1800 to 3800 mm and a dry season of 3 months or less.
It is usually a plant that is not grown, although seedlings are sometimes made available, free of charge, by government-run forest departments in its area of ​​origin to encourage the planting of native trees, particularly endangered ones.
The plant performs best on limestone soils with a pH of 6.0 to 8.0 and on sites with full to partial sun exposure.
The propagation takes place both by seed that must be sown as soon as it is ripe or with semi-woody cuttings.

Customs and Traditions –
Picrasma excelsa is a plant used for a long time by the populations of its area of ​​origin.
The wood of this plant has bitter properties and has long been used as a flavoring agent by the food, beverage and pharmaceutical industries.
The wood produces, by aqueous extraction, a bitter substance known as Quassin, which is about fifty times more bitter than Quinine from Cinchona calisaya.
The plant has long been used as a bittering agent in soft and alcoholic beverages, including grapefruit-based soft drinks and branded alcoholic beverages such as “Campari”, the Italian aperitif, with its distinctive sweet and sour flavor and pink color. -Red. It is also used as a bittering agent in jams and is a substitute for hops (Humulus lupulus), which is used in beer production.
The wood is harvested almost exclusively from wild trees, which are felled and the heartwood is chipped, dried and bagged for export. It is a light yellow wood, light, with an average of about 500 kg per cubic meter it has a good natural resistance to wood insects.
The insecticidal properties of wood have seen it used in aqueous solutions as a natural insecticide, particularly against aphids and other sucking insects. However, it should not be sprayed on plants with edible leaves or fruit, as it gives it its bitter, hard-to-undo flavor.
Unfortunately, the excessive exploitation of the tree, for its wood, has led to this plant being included in the list of vulnerable species of the IUCN, placing attention on the need to protect the remaining wild trees.
The tree is also considered an important resource for wildlife in its native area, feeding many species of wild birds that eat its fruit.
Quassin is occasionally used in laxative preparations.
A tea made with wood is administered as a tonic in its areas of origin to stimulate the appetite and aid digestion.
The bark of Picrasma excelsa contains several medically active constituents including bitter quassinoid principles (including quassin); alkaloids; a coumarin, scopoletin and vitamin B1.
Medically it is an intensely bitter, non-astringent and odorless herb that lowers fever, stimulates appetite and improves digestion.
It is an effective pesticide and is reputed to be antileukemic.
Some of the quassinoids have been shown to have cytotoxic and anti-leukemic actions.
The strongly bitter principle of the bark supports and strengthens weak digestive systems, increasing bile flow and the secretion of salivary juices and stomach acids.
It is used internally in the treatment of a wide range of diseases in which digestion is a contributing factor, in convalescent weakness or in conditions of poor appetite and anorexia.
Its bitterness has led it to be used in the treatment of malaria and other fevers.
It is also used to rid the body of nematode worms.
Used externally, it is a good lotion for getting rid of parasites such as lice.
It is also used in an enema to rid the body of roundworms and other parasites.
In the use of this plant, however, care must be taken as, when ingested, excessive doses can lead to gastric irritation and vomiting.

Preparation Method –
Picrasma excelsa bark can be harvested as needed throughout the year and dried for later use.
From this you can obtain various preparations including a tea that is administered as a tonic to stimulate the appetite and aid digestion.
The wood produces Quassina by aqueous extraction, which is about fifty times more bitter than Quinine.

One thought on “Picrasma excelsa”